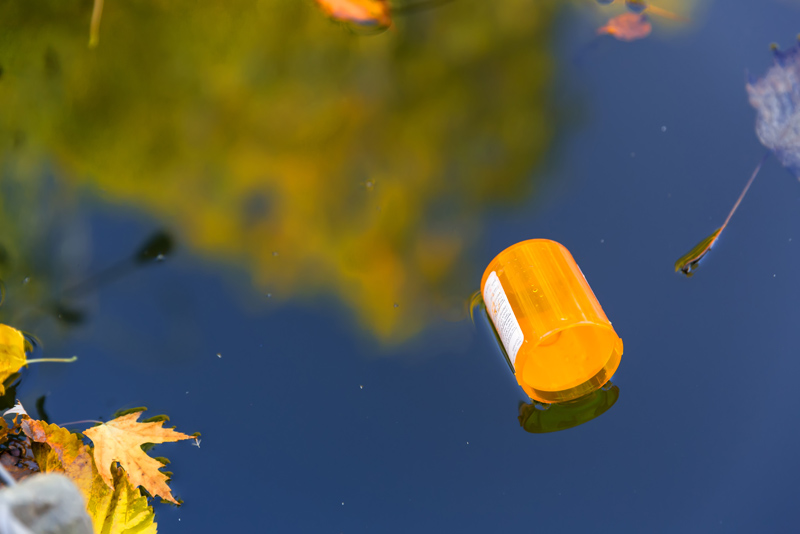 If low levels of antibiotics damage ecosystems, they could also negatively impact the helpful bacteria in our guts that aid digestion and prevent disease. Photo by Dana Quigley

In early fall 2015, Corliss Kanazawa crouched at the edge of Hall’s Pond in Brookline, Massachusetts, and skimmed a test tube along the surface. Her shoes sloshing, Kanazawa (CGS’18) took the sample back to a lab at Boston University’s College of General Studies (CGS), where she is scrutinizing the pond’s tiniest residents—the bacteria—to learn how antibiotics may alter the ecology of our water.

Early results of her study, conducted with Sandra Buerger (CAS’00), a natural sciences lecturer, suggest low levels of antibiotics could affect the types of bacteria that thrive in ecosystems like Hall’s Pond.

Researchers believe the quantity of antibiotics that end up in the world’s water—whether flushed by careless consumers or excreted by overmedicated livestock—is relatively small. But consider the organisms like amoebae that feed on bacteria in ponds, then the bigger organisms—such as water fleas and mussels—that rely on their smaller cousins for nutrition, all the way up to the big fish at the top of the chain. Remove just one species of bacteria or multiply another and the entire food chain begins to break down or change. Now consider the water you drink: Buerger says if low levels of antibiotics damage ecosystems, they could also negatively impact the helpful bacteria in our guts that aid digestion and prevent disease.

In the lab, Kanazawa worked with three samples of water: the one from Hall’s Pond and two taken by Buerger at a marine location. Her first step was to shake the samples using a vortex mixer to separate the bacteria from the sand grains. Then, Kanazawa helped Buerger dilute the bacteria with a sterile solution—without the dilution, the bacteria would form so thickly they’d be nearly impossible to count—and spread them on two sets of petri dishes.

They left one set of dishes untouched; to the other they added low levels—just 25 microliters—of antibiotics in order to re-create the conditions found in the natural environment. Buerger notes that if a natural environment is constantly bombarded with high levels of antibiotics, its bacteria begin to fight back, adapting to become resistant to them. The lower levels of antibiotics in most bodies of water probably “wouldn’t influence antibiotic resistance to such a high degree,” she says, but they are likely having some effect. She and Kanazawa want to know what that effect is.

Kanazawa returned to the lab every week to count the growing bacteria, noting their number and variety to determine how they were reacting—or not—to the antibiotics. There was a lot of tallying to be done. She counted about 1,000 colonies—each a visible group of thousands of bacteria cells that grew from one single-celled organism—on a petri dish smeared with a sample from Hall’s Pond. Not exactly flashy work, but it did afford Kanazawa her biggest research lesson.

“Patience. It’s not something that happens quickly—you can’t get the results in a day,” she says. “It’s a process and you have to be more problem-oriented instead of method-oriented; you can’t just go from here to here, you have to see the causes and effects.” Until they’re involved in research, students may have only conducted experiments that followed a prescribed set of steps to a conclusion most may have already guessed—or Googled.

In the process of counting bacteria, Kanazawa and her mentor found that adding the antibiotics to the samples increased the number of different types of bacteria colonies in the petri dishes. Buerger speculates that could mean the antibiotics are acting as signaling molecules. In the higher concentrations used in prescribed medicines, antibiotics are prized for their ability to disrupt a bacteria’s capacity to grow or repair itself, but scientists have speculated they might play a different role at lower levels, perhaps transmitting messages (such as, “Grow! Grow!”) to the bacteria cells.

That would be significant, and what they found could help scientists in the long run. The majority of bacteria that researchers take from the environment into a lab refuse to grow on petri dishes, a problem they call the Great Plate Count Anomaly. Buerger says there can be millions of bacteria in a gram of soil; even if researchers successfully get 10,000 of those bacteria to grow in the lab (still a lot to count—hence Kanazawa’s sample dilution), that’s a recovery rate of below one percent. If low levels of antibiotics can help some of those bacteria grow indoors, says Buerger, it could help scientists solve the great anomaly and identify new bacteria. It’s possible, Buerger adds, that some of those novel bacteria could be used to “produce antibiotics for human health,” but that would be another couple of studies down the line.

With preliminary results in, Buerger and Kanazawa plan to scale their experiment up, collecting water from different locations.

You may still be contemplating the low levels of antibiotics that could be floating around in your drinking water. Buerger says you can take action now by educating yourself on how antibiotics are used in farm animals and shopping accordingly—multiple estimates have at least half of all antibiotics in America used in food production—and by “disposing of your antibiotics appropriately” (visit the US Drug Enforcement Agency to find an authorized collection point near you).

Kanazawa will soon be an expert on antibiotic use—and in a position to prevent their misuse. Her goal is to major in health sciences and head to medical school.

Our Ecosystem At Risk