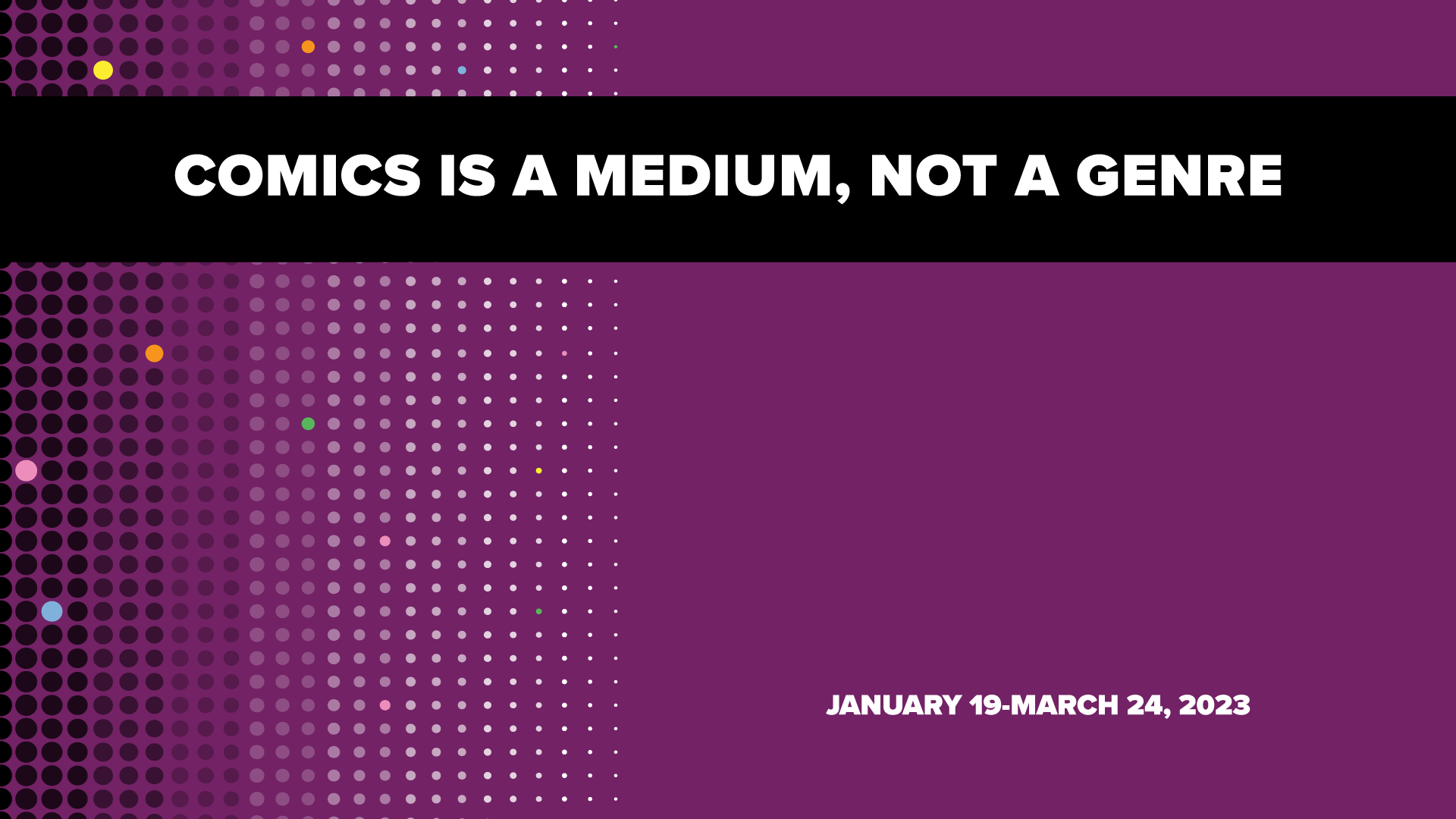 Comics Is A Medium, Not A Genre

If there was ever a sentence that makes Comics makers and scholars cringe, it’s this one: “Bang! Pow! Zap! Comics aren’t for kids anymore!” How many times have we heard that over the last 20 years? Too many. It’s my sincere hope that this is the last time anyone writes about comics this way. Comics have never been just for kids. Comics have never been only about superheroes. In one of the defining books on comics, Understanding Comics, Scott McCloud explains that comics are a vessel for expression. He demonstrates that comics are like a glass pitcher: If you are in Spain and having a siesta on the beach in Valencia, that pitcher is for Sangria; if you are at a kid’s party, then the same pitcher is for a red drink; if you are at a bar, it’s for beer, and so on. The point here is that comics are the pitcher – they are a holder of meaning, not the meanings themselves. The goal of this exhibition is to help us all come to terms with the fact that regardless of their content, Comics, Graphic novels, visual storytelling, sequential art, manga, Bande dessinee, etc. are all the same thing.

Comics manipulate meaning by changing the two fundamental components: words and pictures. Comics change them by merging them into one unit that manipulates the meaning of words by adding pictures (and vice versa). We all understand meaning as the ideas or concepts portrayed; however, when it comes to amorphous ideas, meaning becomes malleable in a multimodal form like comics. German philosopher Ludwig Wittgenstein used the word “games” as an example of the malleable definition of some words. We have all played games, from Hopscotch and Checkers all the way to complicated games like Zelda: Breath of the Wild, the card game Cards Against Humanity, and role-playing games like Dungeons and Dragons. If you had to describe each of those games, you would create a different description for each. In one, you earn points by offending everyone; in another, you pretend to be the Great Wizard Zylak and cast spells and roll weird dice. While these activities all fall into the category of “games,” each is defined differently – and none of those definitions would be wrong. We all know what games are, despite each game having different rules. Comics are like that – hard to define conclusively, but we know them when we see them. However, we can be distracted by the visual language, and as with all things visual, we often can’t see the forest for the trees.

One of the core problems with understanding comics as a medium, not a genre, is that most casual observers apply a Structuralist lens to the medium, and therefore experience comics as what they see in pop culture. The shallow pop-culture view takes in what is most prevalent (superhero comics) and applies it to everything created using the same tools. Makers and scholars of comics know Comics are a vehicle for creative storytelling. Stories, like Comics, can be anything.

The work in this exhibition makes no conclusions about the relevancy or relative value of highbrow vs. colloquial, superhero vs. memoir, or kids’ comics vs. adult. The purpose here is to make the argument that comics are for kids, teens and adults, and everyone. Comics are an expressive medium that artists use to tell stories, and those stories can be anything. They are anything. When you think of comics, remember they are the pitcher – anything can be placed inside.