Major in Japanese Language and Literature (1108)

The Japanese Language & Literature major provides students with an appreciation and critical understanding of Japan’s rich literary and cultural traditions and contemporary culture along with a high level of proficiency in the Japanese written and spoken language.  The program also enables students to function effectively in cross-cultural contexts and to contribute meaningfully to the global challenges of today’s world. Students are encouraged to study abroad in Kyoto at the Kyoto Consortium for Japanese Studies or in Tokyo at Keio University.

Like all WLL majors, Japanese Language & Literature majors begin with XL100: Leaving Home: Explorations in World Literature, a team-taught course in which students meet the WLL faculty through guest lectures and are oriented in the rich diversity of the world’s literary traditions. They begin Japanese language study as early as possible and complete at least two language courses beyond the fifth-semester level (LJ303). Students also have the option of taking classical Japanese, as well as classical Chinese as it was used in Japan until the mid-20th century. Masterpieces of Japanese Literature (LJ250) introduces students to major texts in English translation and can be taken early on in the student’s program. Four additional courses in Japanese language, literature, and/or culture provide greater depth in areas of special interest to the student. One elective chosen among all WLL courses on languages, literatures and cultures from around the world outside of Japan enhances understanding of Japan’s place in the world. Students wishing to explore more of WLL’s course offerings outside of Japan may substitute an additional elective for one of their four courses in Japanese language, literature, or culture.  Majors reconvene with all WLL majors in the senior capstone seminar XL 479, where they work with a faculty mentor on a final project using Japanese language materials.

A total of 11 four-credit courses is required, all completed with a grade of C or higher.

To graduate with honors, students will maintain a GPA in the major of at least 3.4 and will take two additional courses beyond the 11 required for the major:

Minor in Japanese Language and Literature (1108) 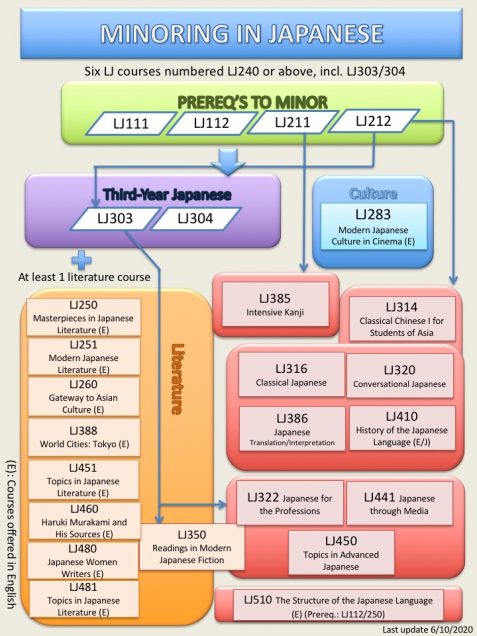