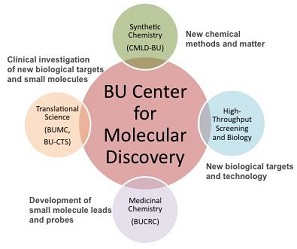 The BU-CMD builds upon the foundation originally established by the Center for Chemical Methodology and Library Development at Boston University (CMLD-BU). Funded by the National Institute of General Medical Sciences (NIGMS) from 2001-2014, the CMLD-BU focused on the production of novel chemical libraries of unprecedented complexity for biological screening, publishing new protocols and methodologies for library synthesis, and providing chemical libraries to members of the biological research community to use as research tools in collaborative efforts.

The BU-CMD has inherited several important resources from CMLD-BU, including infrastructure for chemical synthesis, purification, and analysis, compound curation facilities, the Chemical Library Consortium (CLC) collaborator network, and the CMLD-BU library collection. These resources have been transitioned to the BU-CMD with the goal of enabling translational chemical and biological research, and the continued delivery of key services to scientists and collaborative institutions

CMLD centers of excellence supported by NIGMS were also established at the: