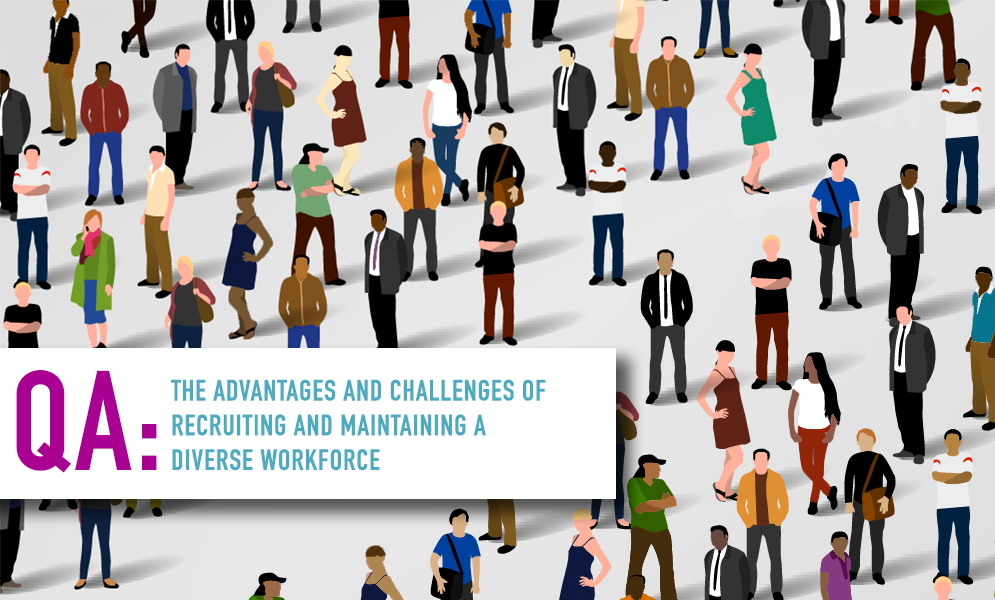 Diversity in the workplace creates friction. It forces people to work harder, challenges their assumptions, makes them less sure of themselves.

This is good, says Evan Apfelbaum, a Boston University associate professor of organizational behavior. Or at least, it can be good.

“Diverse groups tend to engage in more rigorous decision-making, more consideration of different perspectives, which lead them to decisions that are more objective; they’re less likely to make certain mistakes,” says Apfelbaum, whose research focuses on workplace diversity. “But that’s not always the easiest social process.”

Apfelbaum studies how organizations can recruit and retain employees of different ages, races, religions, genders, and sexual identities, and help them work together for the benefit of all. It’s not as easy as celebrating our differences, or, for that matter, cheering our shared similarities. Says Apfelbaum: “That is at the epicenter of what leaders in businesses and academic institutions are wrestling with every day.”

BU Research sat down with Apfelbaum to discuss the advantages and challenges of recruiting and maintaining a diverse workforce. The conversation has been edited for length and clarity.

BU Research: You’ve said that diversity is not better or worse—it’s just harder. What do you mean by that?

Apfelbaum: It makes us work harder. When you have people who look different than you, and you’re sitting down and trying to solve a problem collaboratively, research suggests that you’re less likely to make assumptions about what everyone else thinks. This hard work of dealing with people who are a little bit different, having interactions that are a little less comfortable—that difficulty can become the irritant that creates the pearl, in terms of an idea, or correcting a mistaken assumption. But it’s not always the case that people leave discussions in diverse groups saying it felt great.

Is there some evidence that diverse groups usually come up with better solutions, but that they don’t necessarily feel confident about them?

Confidence often comes from conformity. It comes from “We all thought the same thing, so I’m really confident about it.” And it becomes very tricky to parse the confidence a group conveys about being able to solve a problem, from the more skeptical group that is actually more accurate.

You’ve studied the different ways that companies try to retain diverse workers. Have you figured out what works?

In one recent study, we content-code the public diversity statements of 151 of the biggest law firms in the US, and look at what they’re focusing on in these messages.

And we find two very different approaches. One is focusing on differences and saying how these differences are important, whether it be for fostering a certain culture, or attracting clients, or increasing profits. The other approach is focusing on unifying characteristics: we’re all smart, we’re all qualified, and we all are going to have equal access to the same opportunities. Both approaches sound like they could work, and we find evidence that they both can work, but their effectiveness depends on the context. In this particular study, whether they worked depended on the people targeted by that message.

How did you measure that?

We used these public diversity statements to predict, in these firms, the rates of attrition of women and racial minorities a year later. We found that the more the firms focused on the importance of differences, the lower the rate of attrition of women was. But the more firms focused on the importance of equality irrespective of differences, the more they closed the attrition gap between racial minorities and whites. This was a really powerful finding.

In big law firms, white women often make up 40 percent of the firm. So while they may be underrepresented compared to men, it’s still a sizable number. African Americans are rarely more than 5 percent. And that’s a critical consideration, because if leadership rolls out a well-intentioned approach that focuses on the importance of differences, and you are part of a group that’s 40 percent, that may be an invigorating message. Like “Yes, I want to be recognized. Our experience in the workplace is different, and I have something valuable to contribute from that.”

Ironically, we find that that exact same message of focusing on the importance of differences exacerbates the threat people who are in very small numbers feel, which is “I will only stick out because of my social group membership.” For African Americans or Latinos, who typically make up less than 5 percent of firms, and have had to work their butts off to get to this point, the prospect of bringing more attention to how they are different can be alarming—and challenge their sense of belonging.

So the big-picture takeaway is that you can’t just check a box and say, “We have a diversity message.” We have to really understand the different concerns people have.

What would a leader do to retain or encourage both groups?

The inclusion piece is important: How can you get people to gel in a way that is productive? That’s where collaborators and I are trying to move the needle. What tools can we give leaders and managers to make the most out of the people who are there?

Have you come up with anything yet?

We’re thinking about this as a two-step process. Focusing on equality and fairness is foundational. Everyone wants that. You need to feel like you belong and are accepted as an insider. And once that has been satisfied, then you can start to build on that and create a narrative about how differences matter; in what ways they are important for a business or for a school. But you can’t jump to step 2 if step 1 hasn’t been satisfied.

Have you come across any big misconceptions about diversity in the workplace?

Diversity is often treated as a problem to be solved. A decade, two decades ago, the only time you would hear about diversity is with respect to a compliance measure, or with concerns about being sued. And that’s a misconception. I think diversity presents an opportunity.

To some degree, you could say that the diverse groups are the ones that are more advantageous, and it’s homogenous groups that are the problem to be solved. But that’s not the rhetoric.

Has the discourse on this issue changed since Trump came into office? Has it become more urgent, or more heated?

These issues are as important, as timely as ever. This is in the news constantly. And what I see is a bimodal reaction. Some people feel liberated to talk about how diversity is not important, or how traditional values have been threatened; but on the other side, there is an emboldening of very progressive views about being more inclusive.

As scientists, we make a conscious decision not to enter into this political discussion, but it does certainly feel like we’re researching something that matters right now.

There are 2 comments on Diversity Is Difficult