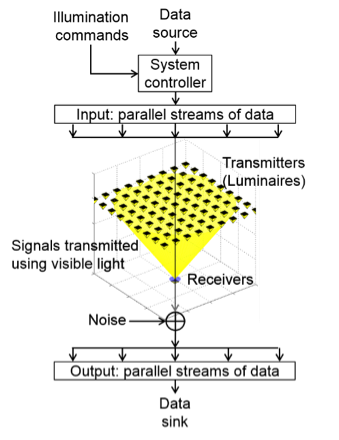 There are three different types of optical MIMO systems:

2. s-MIMO: This system is implemented using multiple luminaires that are placed at different locations on the ceiling. Each luminaire is composed of the same type of LED and thus emits the same color of light. In this case, the data streams are separated spatially because they each originate at a different spatial location. A ‘camera-like’ receiver can then separate the different signal streams and recover data.

3. h-MIMO: This system is a hybrid of the above two systems. It uses multiple luminaires, each composed of different colored LEDs to transmit signals that are separated in color and space. A ‘camera-like’ receiver that can distinguish different colors can then separate the different signal streams and recover data.

Our research in optical MIMO systems focusses on its design, analysis and optimization to achieve high data rates while providing good quality illumination. The framework generated by this work will enable the design of optimal dual-purpose communication and lighting systems.