The spatial and temporal relationship between hemodynamics and metabolic responses is an important consideration when studying neurovascular coupling in the brain. Multispectral imaging and laser speckle contrast imaging when obtained simultaneously are powerful tools to study the cerebral metabolic rate. Intrinsic optical signals are light diffusely reflected from the brain, where raw images of the reflected light shows the surface vasculature with good contrast. The amount of light reflected from the brain surface is modulated by changes in the absorption coefficient of tissue. Since oxy- and deoxy-hemoglobin (HbO and HbR) are dominant contributors to absorption of visible light in the brain tissue, the modulation of the reflected light is related to the changes in HbO and HbR concentrations. Two or more wavelengths of light are used to sequentially illuminate the cortical surface and quantify changes to the individual components HbO, HbR, as well as their total, HbT. (Mayhew et al., 1999, Mayhew et al., 2000, Dunn et al., 2003, Dunn et al., 2005). Laser speckle contrast imaging allows for real time detection of cerebral blood flow (CBF) changes. Additional information on laser speckle contrast imaging can be found here.

Changes in reflected light intensities can be converted to changes in HbO and HbR concentrations by using the modified Beer Lambert relationship,

where  is the attenuation at each wavelength,  and  are the reflected intensities at baseline and at some time t,  and  are the molar extinction coefficients, L is the wavelength dependent mean path length of the light in the tissue, and  and  are the changes in concentration of HbO and HbR that can be calculated using least-squares.

HbT and HbR taken together with CBF can be used to calculate the cerebral metabolic rate of oxygen (CMRO2) with the expression,

where the subscript ‘o’ indicates baseline values, and  and  are two unknown constants that are varied independently. This gives a range of CMRO2 values given baseline vales of HbT and HbR and obtained measures of  and . More details for this derivation can be found in Jones et al., 2001.

Simultaneous multispectral and laser speckle imaging enables better understanding of the spatiotemporal characteristics of hemodynamics and CMRO2 and is essential for further understanding the complex neurovascular coupling that exists in normal brain as well as how this coupling may be affected in disease.

Our design of the simultaneous multispectral and laser speckle imaging requires two sets of illumination sources, an objective, a dichroic filter, two focus lenses, and two cameras. For multispectral imaging we sequentially illuminate the cortex with three LEDs with center wavelengths 470nm, 530nm, and 625nm. The LEDs are collimated, filtered around the center wavelength, and either transmitted or reflected using dichroics to illuminate the whole cortex. The LEDs are controlled using an exposure out signal from the multispectral camera via a microcontroller. A 785nm laser diode with a collimation kit is used to illuminate the cortex for laser speckle imaging. The LEDs and the laser diode illuminate the cortex at an angle of ~30o from two sides of the objective. A 2X 0.1NA objective with a 56mm working distance is used to capture the light and a 640nm dichroic beamsplitter is used to either transmit (780nm laser) or reflect (visible light) the captured light. A 785nm bandpass filter and an iris are placed along the laser speckle arm and a 650nm shortpass filter is placed along the multispectral arm to prevent bleed-through. To focus the light onto the camera sensor a 200mm infinity corrected tube lens for widefield imaging is used in both arms. (Design adapted from Jones et al., 2008, White et al., 2011, Ma et al., 2016) 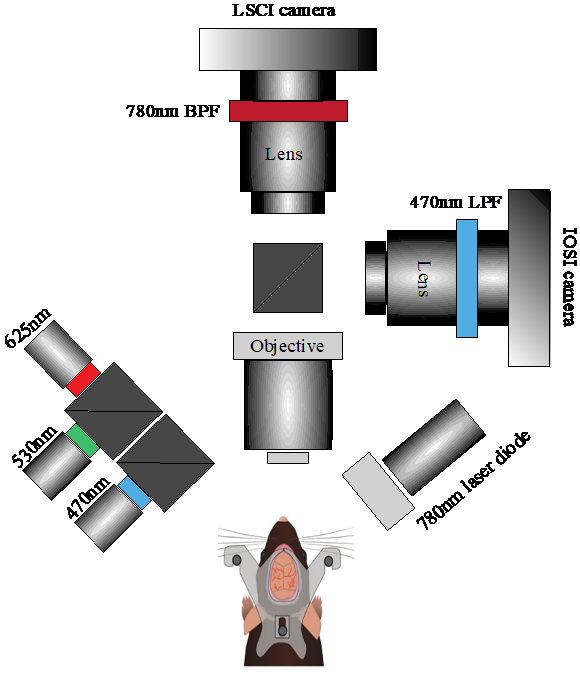 Combined multispectral and laser speckle imaging is used extensively to study the spatial and temporal neurovascular and metabolic patterns evoked during functional activation in normal rodent brain (Dunn et al., 2005) as well as in disease such as cerebral ischemia (Jones et al., 2008). Relative blood flow changes is useful for real-time monitoring in ischemic stroke experiments and multispectral imaging is used to monitoring chronic changes in activation maps due to stroke. The combined system can be used to follow changes to metabolic function chronically after injury. 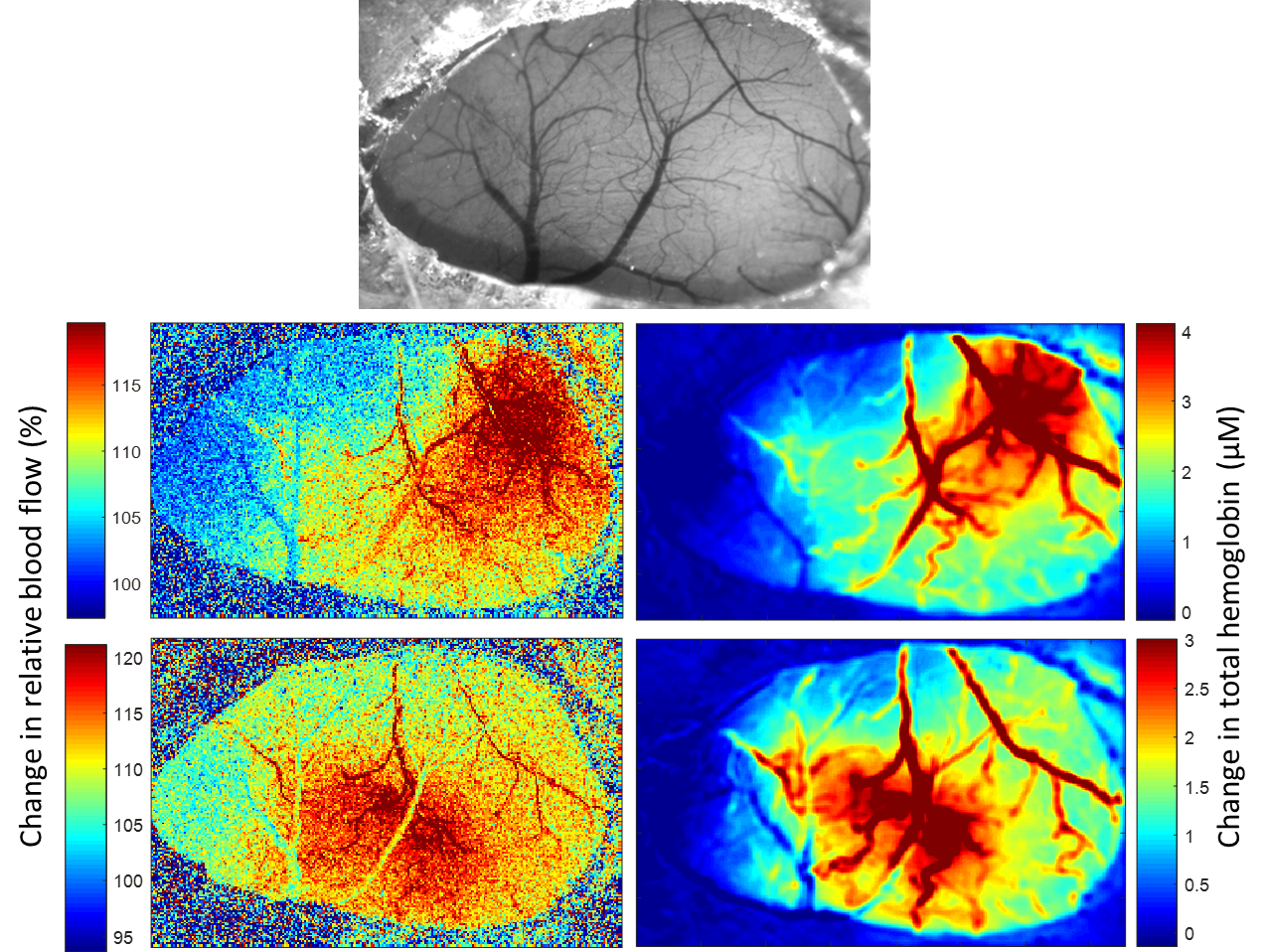 Github Code:
The link to the multispectral and laser speckle code can be found here on github.