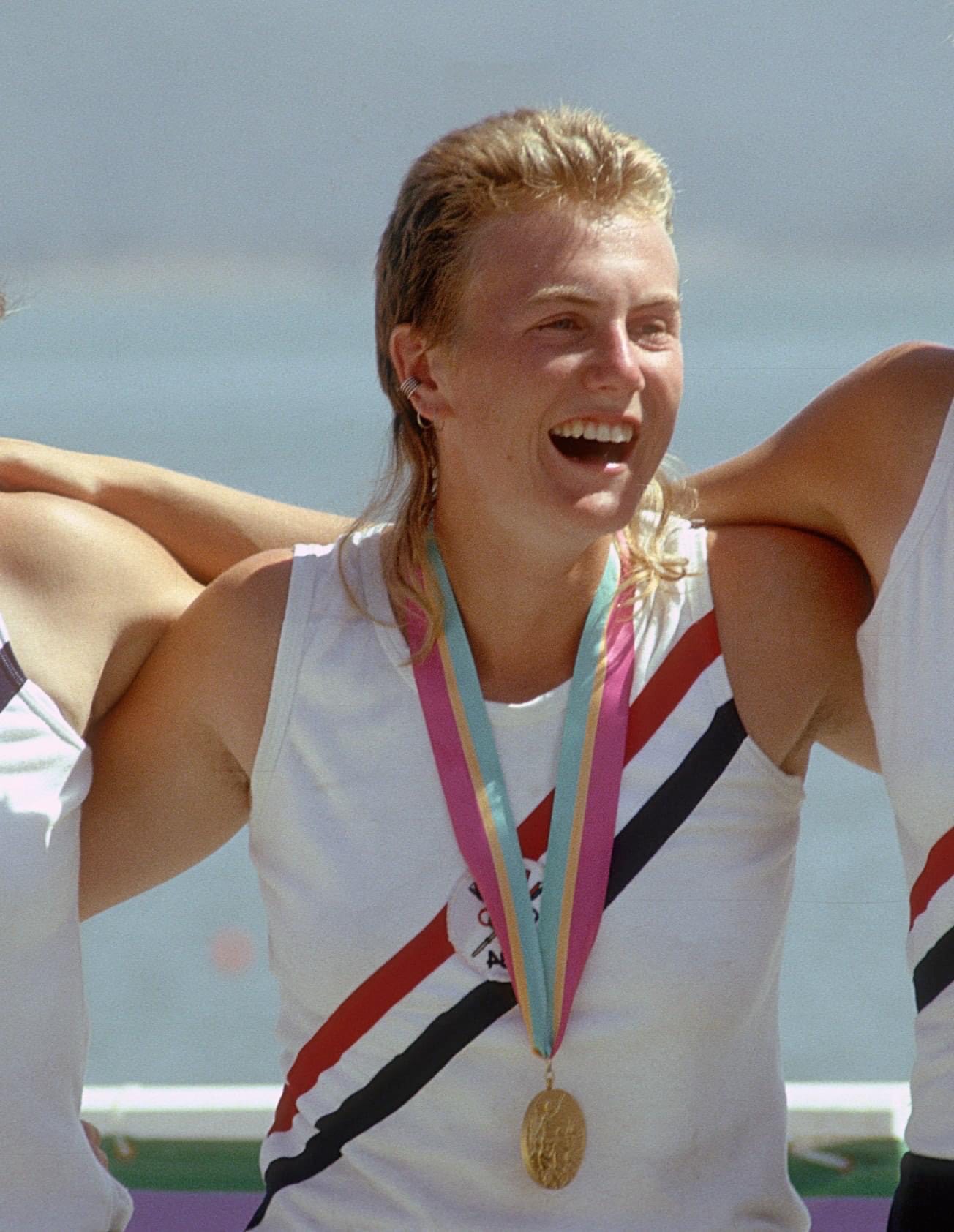 Kristen J. Thorsness (’89) competed in two Olympics as a rower after being admitted to BU Law. She won gold in 1984 and went on to a career as a civil litigator.

When Kristen J. Thorsness (’89) was studying at Boston University School of Law, one of her favorite professors was the late Mark Pettit Jr., well known among generations of students for his enthusiastic teaching style, which included law-themed parodies of musical numbers designed to impart the finer points of contracts law.

“He was quite deservedly much loved,” Thorsness remembers. “He was a great teacher, and I certainly used what I learned in his classes in my career as a civil litigator.”

But Thorsness also has immense appreciation for a group of people less likely to inspire—although no less deserving of—praise: the staff of BU Law’s Registrar office. That’s because the members of that department gave Thorsness every opportunity to accomplish two of her life goals: graduating from law school and competing in the Olympics as a member of the US rowing team.

When Thorsness qualified for the 1984 Olympics, which were scheduled to end just a few weeks before her first semester of law school, the registrar informed her of the ability to defer her admission for a year. When Thorsness needed to miss several weeks of her 3L fall classes and the entirety of her final semester to train with her teammates for the 1988 Olympics, the registrar smoothed that process as well.

“I have a great fondness for the people in the Registrar’s office,” Thorsness says, laughing.

It’s not as though Thorsness was given any special treatment—she completed those fall semester exams in January of 1988 before rejoining her teammates in February and returned to BU Law in 1989 to finish her degree. But she recalls the Registrar’s office doing everything they could to ensure her leave of absence would be granted. She remembers a staff member leaning over the counter one day to tell her there had been at least one other BU Law student who took a leave of absence to compete in the Olympics (two possibilities are: Thomas Burke (Class of 1897), who took a leave and won gold medals in the 100-meter and 400-meter dash for the first modern Olympic games, which took place in Athens in 1896; and William C. Prout (Class of 1910), future president of what became the US Olympic and Paralympic Committee, who ran the quarter-mile and 400-meter events in the 1908 Olympics in London).

“She said, ‘We’ve been doing research,’” Thorsness remembers. “‘You know how those lawyers are about precedent.’”

Thorsness—who grew up in Alaska and studied political science and women’s studies at the University of Wisconsin at Madison, where she was a national champion rower—more than delivered on her end of the bargain. She was a member of the US National and Olympic Rowing team from 1982 through 1988, winning three World Championship silver medals and a gold medal at the 1984 summer games in Los Angeles. She was also a Paul J. Liacos Scholar at BU Law and won an American Jurisprudence Award for her work in an admiralty and maritime law class. Then, she went on to a diverse career in public and private practice.

Thorsness says she loved competing at the highest levels of her sport.

“Perspective is a funny thing,” she adds. “When you’re surrounded by a bunch of people who are doing the same thing you are, it doesn’t feel that extraordinary. But I loved helping the boat go fast.”

Kristen Thorsness (’89) at the 1984 Summer Olympics in Los Angeles

She adds that the lessons and skills she learned as a rower and aspiring lawyer complemented each other.

“Being an elite athlete—any athlete—and having the level of focus and dedication that requires really fits in nicely with being a lawyer,” Thorsness says. “I transitioned pretty seamlessly from one high-intensity pursuit to another. It worked out really well.”

Thorsness’ career and athletic paths were well aligned. She chose BU Law because Boston was one of the cities where she could train with the national team and because she was “a big fan of Barbara Jordan,” a 1959 graduate who was the first African American woman elected to Congress from the South. The school’s location on the Charles River was a major plus; Thorsness got up at 5 am most days to bike to the Harvard or Radcliffe boathouses where practice began at 6. After breakfast, she attended classes and then went back for a second workout. The next day, she’d do it all over again. Sometimes, she ran the stairs of the law tower as part of her training. She was the school’s “pet Olympian,” she says, noting the incredible support she received from professors, classmates, and staff.

Thorsness says being an athlete helped her land her first job at an international law firm in San Francisco. The managing partner pointed out that Thorsness had posed with President Reagan wearing her gold medal and wondered if she was prepared for the more mundane tasks of the law.

“I said, ‘I train twice a day, six days a week, year-round for a single minutes-long race; I understand drudgery,’” Thorsness remembers. “He told me later that’s what got me the offer.”

Thorsness isn’t after fame in her career either; she prefers the behind-the-scenes, strategic work of litigation to actual trials. Her proudest professional moments, including during stints in county counsels’ offices in California and New York, have involved getting cases dismissed.

“That was always my focus from the day a complaint was filed,” she explains. “All of my discovery went toward setting the case up for dismissal.”

In 2016, after a couple of health scares, Thorsness tried to retire from the law. She took a job at LL Bean, teaches at Finger Lakes Community College, and became a court-appointed referee to oversee occasional residential foreclosure proceedings. But last year, her older brother, who runs a firm in Anchorage, asked her to step in when a more junior attorney left without much notice.

“Now he calls me his associate,” Thorsness laughs. “But we have a lot of fun working together. We joke that being a lawyer is a genetic defect in our family. It’s one of the few socially acceptable pursuits that are well suited for our personalities.”

Outside of the law, Thorsness remains very involved in the world of sport. She has been a US Rowing Association referee since 2004 and this year was named to the US Olympic and Paralympic Committee’s Trial Administrative Board, which handles disputes about compliance, and the Games Administration Board, which adjudicates appeals from disciplinary actions for athlete conduct during the competition.

“Rowing was really good to me,” she explains. “It changed my life. I feel it’s really important that I give back to the sport.”