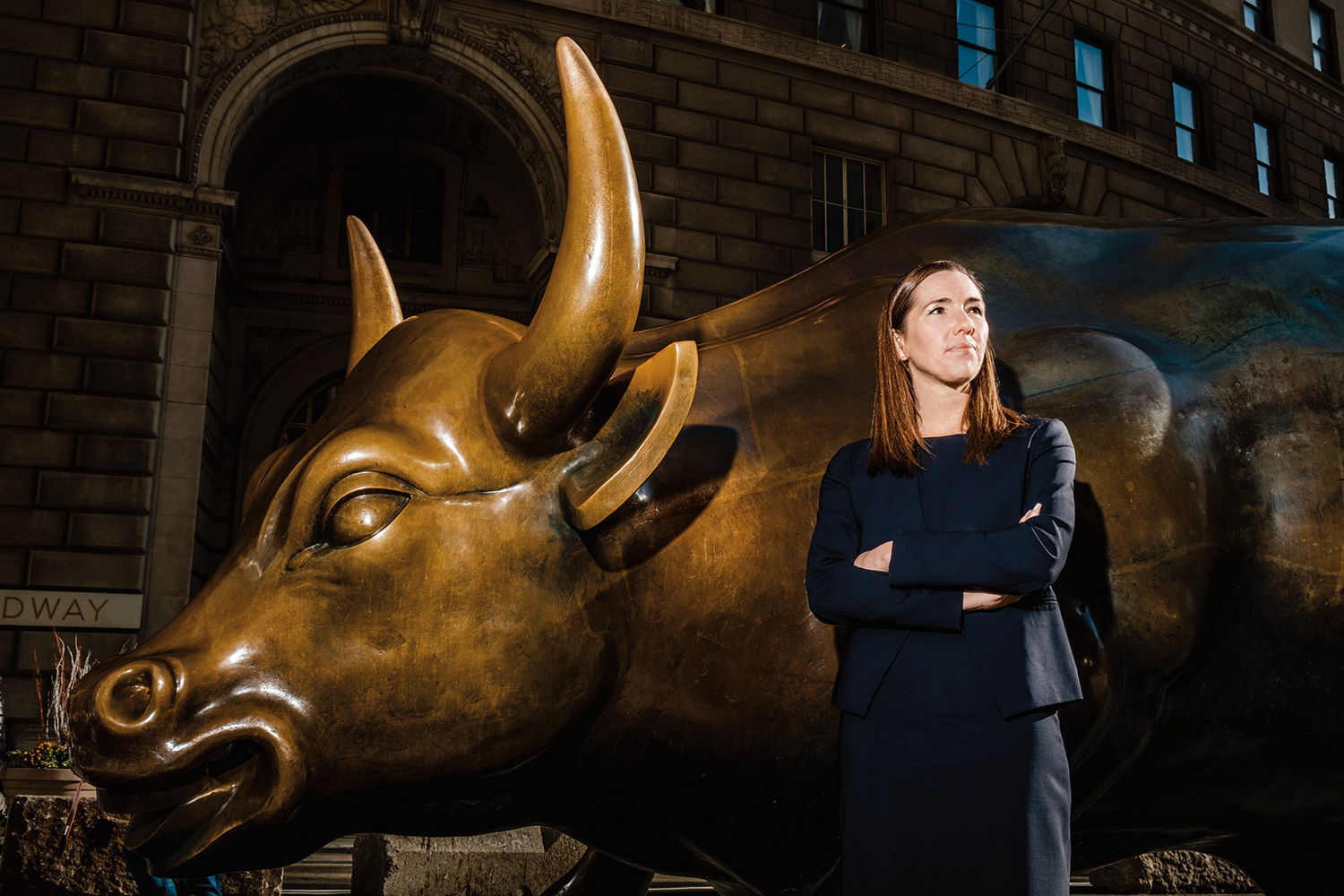 When billions are on the line, Jennifer O’Neil brokers deals.

Like millions of Americans, Jennifer O’Neil (’07) spent last spring and summer stuck at home. She started her days at 6 am with a run, soaking up Daniel Kahneman’s Thinking, Fast and Slow on her seven-mile route. She prepped dinner every night, chopping onions for curries and beating eggs for frittatas. And in between and into the night, during marathon 16-hour workdays, she deftly brokered a massive global agreement to restructure Argentina’s $65 billion debt.

Bloomberg Business hailed O’Neil in September as the “new star” of BlackRock Inc., the world’s largest asset manager. She diplomatically deflected the praise, insisting that “it takes more than one person to get the deal done.” Locking in payment terms for dozens of institutional creditors demanded more than eight months of patience, financial savvy, protracted phone and Zoom conference calls, and an unflagging commitment to finding common ground. In the end, O’Neil’s negotiations helped secure about $13 billion more for a group of creditors than the Latin American country insisted it could ever possibly pay. “the goal is to find a constructive solution,” says O’Neil, a managing director at BlackRock, which oversees more than $7 trillion in assets worldwide. “You’re really trying to maximize value for everyone in a situation where there’s not enough value to go around, and everybody recognizes that.”

“Not enough value to go around” is a tactful description of Argentina’s financial woes. Decades of political turmoil, rising debt, and skyrocketing inflation had left the country in dire economic straits. The government had repeatedly defaulted on its debt and owed creditors a total of about $324 billion, or about 90 percent of its gross domestic product, according to the Buenos Aires Times. Shortly after Alberto Fernández became president in December 2019, interest payments of $500 million were due on $65 billion in bonds, and it appeared that the country would default yet again. Fernández named a new minister of economy: Martin Guzmán, an Argentine who’d earned a doctorate in economics at Brown University.

Refinancing the country’s hefty debt was the only way forward, but reaching consensus would require delicate, face-saving negotiations for Argentina and the buy-in of dozens of anxious, hungry creditors. O’Neil and her BlackRock colleagues were working in a group of 15 financial institutions, which in turn represented the interests of various investors around the world. In BlackRock’s portfolio of investors, O’Neil notes, are pension and retirement funds for teachers, firefighters, and nurses—people to whom BlackRock has a fiduciary duty. Settling for too little would, ultimately, shortchange not only global financial groups but also those investors.

O’Neil has plenty of practice making a little go a longer way. She manages an 11-person team that covers all of BlackRock’s alternative investing, including restructuring sovereign and corporate debt, throwing a financial lifeline to distressed countries and businesses. Long workdays are a given. But when the COVID-19 pandemic upended business operations for both companies and consumers, O’Neil’s workload became even more intense.

Argentina was already on her radar. BlackRock had reached out to Guzmán about refinancing when he took office, but negotiations had a rocky start. Creditors were focused on a constructive negotiation process, and Argentina didn’t seem to be on the same page. The Argentine government insisted it couldn’t pay more than 39 cents on the dollar. Knowing that bondholders represented by other financial institutions were vying for limited resources, Argentina’s officials attempted to play one group off the other. They made personal attacks in the press. They insisted, again and again, that every offer was their final one. Proposals were drafted and lobbed back and forth for months before being rejected. London-based bondholders on 3 am phone calls stifled yawns.

“Had we been in person, it would have been easier to push the government in a conciliatory way, to have them think a bit more outside the box,” O’Neil says. “When you’re on Zoom and it’s silent for a minute, everybody just hangs up and goes back to their living room. That’s the real value of being in person: you can’t just cut things off.”

There are all these Type A personalities, and one of the reasons we were able to hold it all together was that Jen forged relationships with other groups and kept the creditors from fighting against themselves, which would have been incredibly self-destructive.

Meanwhile, COVID-19 cases skyrocketed. Hospitals filled, and gyms and restaurants emptied. O’Neil clung to her morning runs “for sanity’s sake.” She and her partner decamped to a rented seaside house on Long Island’s rustic North Fork when the weather warmed. Negotiations dragged. She returned to Tribeca for a week. She went back to the North Fork.

In the thick of talks with the Argentines, O’Neil slotted a $17 billion debt-restructuring deal for Ecuador onto her to-do list, working out an amicable settlement in just two weeks. That success sent a strong signal to Argentina’s team that BlackRock and other bondholders were willing collaborators, but talks made little headway. Without chitchat over coffee breaks or socializing over boxed lunches, the parties had few opportunities to build the rapport that paves the way for compromise. “The personal connection is much harder to establish,” O’Neil says. “I can say with absolute certainty that it was not a positive to be doing this remotely.”

O’Neil was not BlackRock’s sole negotiator, but she was the one who found a way to click with Guzmán. Like O’Neil, he is a runner who knows New York City (he’s affiliated with Columbia University’s Initiative for Policy Dialogue). Their talk at one point drifted to running routes through Central Park, where he used to jog. “The key thing was really just establishing a connection,” O’Neil says, “adjacent to but not completely focused on the economics of restructuring the 60-plus billion dollars of debt. In the end, I was the one who was able to get the traction, to really dot the i’s and cross the t’s on getting a deal done and to take it across the finish line. Why it was me versus someone else is a bit of a mystery—some combination of luck and skill.”

It’s no mystery at all, says Brian Pfeiffer, who represented the interests of 13 large creditors, including BlackRock and two hedge funds, in negotiations. O’Neil calmly stood up to Argentina’s team when they postured and bluffed. She cultivated a deep and vast knowledge of the parties’ interests and concerns. And, he says, she nimbly managed the competing demands—and outsized egos—of hungry creditors.

“There are all these Type A personalities,” says Pfeiffer, a partner in White & Case’s Miami office, “and one of the reasons we were able to hold it all together was that Jen forged relationships with other groups and kept the creditors from fighting against themselves, which would have been incredibly self-destructive.”

A Career of Pivots

After studying mathematical biology at the University of Washington, O’Neil chose BU Law to pursue her interest in bioethics. She pivoted to business restructuring and reorganization, spending eight years at Jones Day and a year at Anchorage Capital Group. Eager to return to California, the San Diego native interviewed with BlackRock in 2015 for a San Francisco–based job. Her skills better aligned with a role based in New York City, so she took the job and stayed put.

Since joining BlackRock, O’Neil has proven herself an adept and unflappable team member and leader who balances many competing—and sometimes contradictory—concerns, says colleague Sergio Trigo Paz, head of BlackRock’s emerging markets fixed income, who worked with her on the Argentine and Ecuadoran debt restructurings. “You are in a place where you know everyone will be unhappy in the end,” he says. “Minimizing the unhappiness is the clear goal.”

Diplomacy, negotiation, and trust are as much a part of debt restructuring as crunching numbers and hammering out legal language. Although the Argentines repeatedly claimed they were making a “final offer,” O’Neil patiently edged them toward a better position for creditors. Argentina’s team ultimately upped its “final offer” to more than 54 cents on the dollar, resulting in $13 billion more for creditors than the country had offered at the start of talks.

“We just were able to find value in different pockets,” O’Neil explains. “We had to get very creative and try to figure out other ways to generate value for the bonds. You never want to leave something on the table.” Argentina will make minimal payments through 2024, giving Guzmán time to implement policies to revive the economy. It will be many years, however, before creditors know whether the country can successfully emerge from its financial crisis.

The global economic upheaval caused by the pandemic will keep O’Neil busy with sovereign and corporate debt restructuring. Her ideal scenario for those deals takes its cues from how the Argentine process played out: “A group of really smart people come together and come up with a creative solution to a very big, very complicated problem, and they work with a particularly challenging counterparty to get to an agreement. Being able to overcome a challenge like that is a pretty big accomplishment. And I like being part of that.”