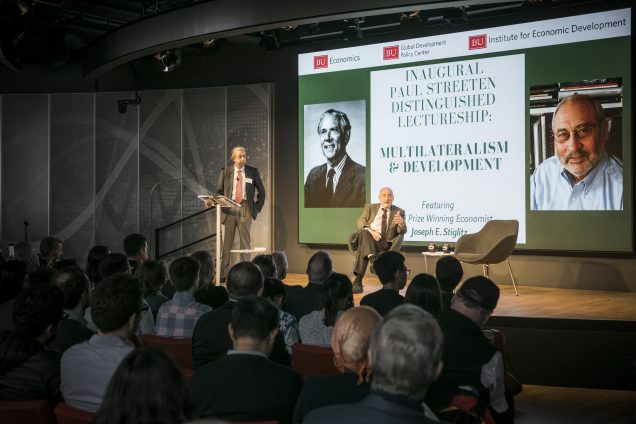 Rodrik’s talk focused on “The Future of Development Strategy,” noting that the COVID-19 pandemic has reversed some of the crucial gains in economic development and poverty reduction achieved in recent decades. But even prior to the pandemic, there were signs the golden age of economic development was coming to an end, as the export-oriented industrialization model begun running out of steam. Rodrik argued that in the years ahead, it is unlikely low-income countries will be able to return to the accelerated development paths they were previously on. New models will need to be considered, models that perhaps place less emphasis on promoting trade and industrialization and more emphasis on creating decent jobs and building a domestic middle class.

This distinguished lectureship honors Professor Streeten’s rigorous scholarship, interdisciplinarity and policy involvement, which have been manifested throughout his career. He has made significant contributions to the economic theory of industry and trade with articles in the Quarterly Journal of Economics, The Review of Economic Studies, The Journal of International Economics and the American Economic Review.  Professor Streeten also founded what has become the world’s leading interdisciplinary journal in development studies, World Development. His groundbreaking scholarly books, such as First Things First: Meeting Basic Human Needs in the Developing Countries (Oxford University Press) and Thinking About Development (Cambridge University Press), have dealt with broad and important development questions.

Professor Streeten’s scholarly research and his direct engagement with development policy have made substantial contributions to the policy discourse on global development. He served as Deputy Director General of the Economic Planning Staff of the United Kingdom’s Ministry of Overseas Development; then as senior adviser to the World Bank he helped to formulate the Bank’s policies on basic needs during the 1970s; and his scholarly work laid the foundations of what became the United Nations Development Program’s (UNDP) Human Development Index (HDI) that emphasized and quantified the importance of education and human health as essential components of the development process. During the 1990s, he provided major inputs into the UNDP’s Human Development Report and UNESCO’s World Culture Report.

The annual Paul Streeten Distinguished Lectureship in Global Development Policy has three goals. First and foremost, it honors the impact and legacy of Paul Streeten’s scholarship and policy engagement. Second, the lectureship seeks to shine light on scholars working in the ‘Streeten tradition’ who pursue rigorous scientific research while connecting with other disciplines and the policy community to advance financial stability, human well-being, good governance and environmental sustainability across the developing world. Third, the lectureship hopes to inspire younger scholars to pursue interdisciplinary research on pressing development problems and thereafter engage actively with the policy community.

Throughout history, the chemical element mercury has had a variety of applications...

Wildlife conservation and management (WCM) practices have been historically drawn from a...