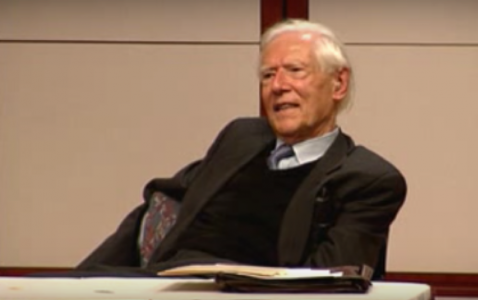 Paul Streeten, Emeritus Professor of Economics at Boston University, passed away at the age of 101 at his home in Princeton, New Jersey on January 6, 2019. He was born in Austria in 1917, escaped to the UK at the start of the Second World War and was later wounded while participating in underground military activities in Europe. He studied at Balliol College Oxford, where he subsequently became a Fellow in 1948. During the 1950s, he made significant contributions to the economic theory of industry and trade with articles in leading academic journals such as the Quarterly Journal of Economics, Review of Economic Studies, Journal of International Economics, and the American Economic Review.

From the 1960s onwards, Streeten’s interests turned to development economics and policy. He was acting Director of the Institute for Development Studies, Sussex during the late 1960s, then served as Warden of Queen Elizabeth House, Oxford, and as Deputy Director General of Economic Planning in the UK Ministry of Overseas Development. He then joined the World Bank as a senior economic advisor, working on the Bank’s new program on Basic Needs. In 1972, he led the establishment of World Development, which remains to this date the leading interdisciplinary journal in development studies. He remained actively involved in advising the World Bank and the United Nations Development Program in setting up their new initiatives in human development, and contributed to the writing of the UNDP World Development Report and UNESCO’s World Culture Report. The same year saw the publication of his first major book, The Frontiers of Development Studies (MacMillan Press) containing critical essays on a wide range of topics including development planning, education, social rights, international capital movements, multinational corporations, foreign aid, technology transfer and political economy of environment.

Streeten joined Boston University’s Department of Economics as a Professor in the mid-1970s where he remained until his retirement in the late 1980s. He published his best-known books during this time, such as Development Perspectives (Macmillan, 1981) and First Things First: Meeting Basic Human Needs in the Developing Countries (World Bank, Oxford University Press, 1981). His stature in the field of development helped attract numerous younger students and mid-career public officials from around the world to come to study at Boston University.

He also served initially as Director of the Economics Department’s Center for Asian Development Studies. As his interests expanded beyond Asia, this Center became the World Development Institute with Streeten as its Director. The tradition of policy-oriented development research that he helped build has subsequently expanded across the university, including the new university-wide Global Development Policy Center.

Streeten remained active even after retirement, continuing to speak at numerous conferences around the world. His writings and lectures during this time anticipated the expanding domain of development economics to include problems of governance, environmental sustainability and distributional consequences of displacement of workers by automation. In 2010, he was a visiting Professor at Boston University’s Pardee Center for the Study of the Longer-Range Future, where he delivered two lectures on Technological Nightmares.

In appreciation of his far reaching contributions to development thinking and policy, the Global Development Policy Center, the Department of Economics, and the Institute for Economic Development are establishing the annual Paul Streeten Distinguished Lectureship in Global Development Policy. Economist and Nobel Prize winner Joseph Stiglitz will deliver the first lecture in March 2019 on the topic of ”Multilateralism and Development”. The lectureship series seeks to inspire scholars working in the ‘Streeten tradition’ who pursue rigorous scientific research while connecting with other disciplines and the policy community to advance human well-being, financial stability, and environmental sustainability across the developing world.