The Case for a New Bretton Woods 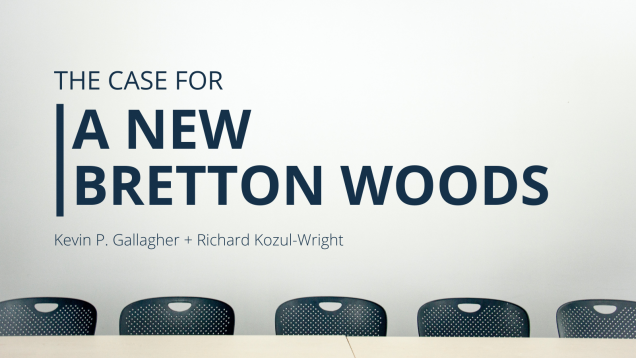 Amid the devastation of World War ll, the United Nations Monetary and Financial Conference convened in Bretton Woods, New Hampshire with the goal of designing an interdependent economic architecture for mutual prosperity. Based on a set of common principles of peace, equity and employment, the International Monetary Fund (IMF) and precursors to the World Bank and World Trade Organization were established to support the provision of global public goods, institutions that in their present form have loomed large in the global economy since their inception.

But the disjointed nature of the response to the COVID-19 pandemic as well as further deferment of crucial climate action, reveals the multilateral system is in need of fundamental reform. In echoes of the 1930s, the international community cannot coordinate well enough to provide global public goods for stability and prosperity or to combat right-wing populism and footloose finance.

Published by Polity Press, the book outlines a set of principles for a new multilateralism and a blueprint for change across three critical areas of global economic governance: the international financial system, trade and investment and development finance.

A Bretton Woods moment is urgently needed to avoid further health, climate and financial crises and to build a new trajectory toward sustainable, inclusive prosperity. The required reset of the international system to face contemporary economic and environmental challenges will not succeed through backroom diplomacy and grand summitry. Rather, such a moment should be part of a global conversation with voices from Bali, Bogota, Buenos Aires, Berlin, Brazzaville, Beijing, Bangalore, Boston and beyond.