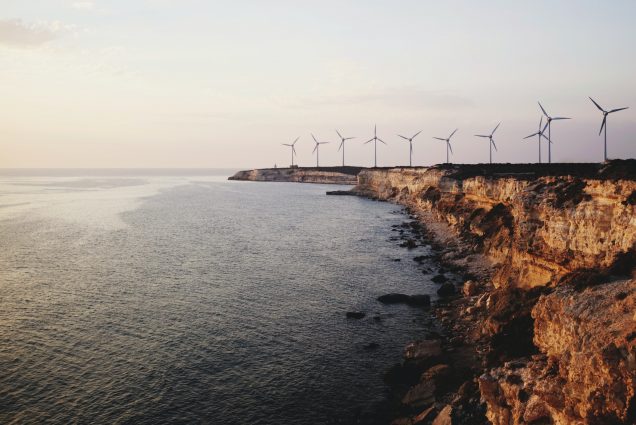 On Thursday, July 15, the Boston University Global Development Policy (GDP) Center and the United Nations Conference on Trade and Development (UNCTAD) hosted a webinar discussion to explore the recently announced “Build Back Better World’” (B3W) Partnership from the G7, billed as a “Green Marshall Plan” to generate improved access to financing for low-carbon projects in developing countries. The discussion was moderated by the GDP Center’s Rebecca Ray, and featured Saliem Fakir, Executive Director at the African Climate Foundation; Jayati Ghosh, Professor of Economics at the University of Massachusetts at Amherst; and Cecilia Han Springer, Senior Researcher with the GDP Center’s Global China Initiative.

Rebecca Ray introduced the session with a short background on the financing needs to meet development and climate ambitions. She explained that UNCTAD has called for a new “Marshall Plan” on two fronts – both to support a global public health response and as part of a broader package to transform the global economy, rebuilding after the pandemic and ensuring resilience into the future.  The G20 Foundations Platform estimates that the world needs new investments of 2.1 percent of annual GDP to deliver on the 2030 Sustainable Development Goals (SDGs) and the Paris Agreement.

Ray noted that the GDP Center has been tracking over $400 billion of infrastructure investment from China’s Belt and Road Initiative (BRI) since the last global economic peak in 2008 – nearly as much as the World Bank and much more than any other bilateral creditor. While the BRI has brought significant benefits (including an estimated 3.4 percent increase in real global income for participating countries), it has also brought significant risks, especially to fragile ecosystems and indigenous communities. The G7 B3W Partnership – suggested by some to be the Western alternative to the BRI – differs by being primarily focused on mobilizing private finance to meet the $40 trillion financing gap for infrastructure investment in the Global South.

Is a Green Marshall Plan Achievable? Remarks from Panelists

Considering that initial plans for B3W are light on detail, Saliem Fakir’s intervention began by focusing on the importance of political economy in understanding the initiative and the broader challenge of energy transitions. He argued it is not feasible to talk about climate action without embedding it within a developmental agenda. While expressing doubt about the suitability of the plans for B3W, Fakir agreed that the world does need a Marshall Plan-level of ambition to address under-development, but he was not optimistic on how this can be advanced when leaders are far from a consensus on a global approach and the zero-sum game of national interest prevails.

He explained that B3W is proposed in a context where the US is focused on catching up with geopolitical rivals, such as China, while simultaneously trying to overcome domestic barriers to the “Build Back Better” notion. Fakir argued B3W can be understood as a repositioning of a weakened G7 as part of this project, but opposition to China hasn’t garner the full support of all G7 members.

It’s important, therefore, to not talk about B3W as an apolitical project. Fakir explained how the introduction of B3W as an alternative to the BRI shows the challenge of global alignment versus global friction. The two frameworks involve a race for influence between these rivals, for example, consecrating specific digital infrastructure to advance the pursuit of tech dominance and securing lines of supply for goods, such as key green technology minerals. Fakir warned the nature of this competition should not be underestimated, nor the consequences it will have for developing countries pressured to fit into one sphere, or the other. He argued the Global South needs countercyclical remedies, a clean infrastructure push, aligned resources of finance and an enabling trade policy. However, global policy approaches to the just transition continue to be framed by the interests of powerful countries. This leads to negative consequences for the least developed regions, epitomized by the European Union’s (EU) Green Deal and their suggested Carbon Border Adjustment Mechanism.

Fakir noted Africa is at the center of this tension as a richly endowed continent. The continent sits at an historical juncture, revising entire models of development especially for commodity-dependent countries. To benefit from initiatives like B3W, African economies will have to reconstitute their approach to climate diplomacy, moving beyond the Paris process, which is important, but according to Fakir, simply not powerful enough to take on these political economy challenges. Fundamentally, this would require looking beyond financing fixes, like B3W alone, to the broader architecture of trade rules and global finance.

Cecilia Han Springer spoke next, focusing on lessons the B3W project should take from China’s BRI. Han Springer argued broadly that B3W should aim to work in parallel with the BRI to generate economic benefits for the Global South, to improve global sustainability efforts and to develop healthy competition with China in a move towards collective goals. 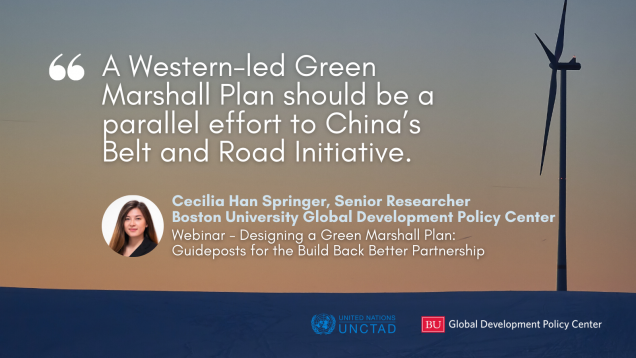 The China’s Overseas Development Finance Database created by the GDP Center has shown the BRI already matches the World Bank and outpaces multilateral development banks (MDBs) in scale, with other research from Yan Wang and Justin Yifu Lin showing how the BRI has helped unlock infrastructure bottlenecks.

Han Springer explained there are also liabilities, though. For example, recent work by the GDP Center showed the level of global exposure to Chinese debt and climate change, as well as risks to biodiversity and indigenous lands by encroachment. Yet, China is far from alone in financing construction in high-risk areas. For example, while China has a higher average risk per loan than World Bank projects, World Bank projects have a higher maximum risk per loan, indicating that a greater share of World Bank loans affect at least one high-risk point in their geographic footprints.

Next, Jayati Ghosh agreed it was important to recognize the significant contributions of China. From her perspective, she argued the international community cannot think of any global challenge without considering China. For example, more than half of COVID-19 vaccines distributed globally have come from China.
space

However, according to Ghosh, the world is nowhere near achieving a “Green Marshall Plan.” The original plan was marked by three specific factors that made it a success: 1. speed, delivered over a few years; 2. generosity, being made up mostly of grants or long-term low interest rate loans; and 3. significant public funding, which was actively encouraged to create the conditions for sustainable economic growth.

Unfortunately, recent proposals have signaled a shrinking of vision and ambition just when the global challenges of addressing the COVID-19 pandemic and climate change call for urgent action with even greater ambition.

To Ghosh, this means increasing pressure and critique where necessary. One significant risk she said must be addressed is the capture by capital of the “Global Green New Deal.” According to Ghosh, private sector giants are continuing to seek access in key forums for how they can better leverage their influence to sustain their dominant positions. This is evidenced in the B3W by a focus on “mobilizing private finance,” which would be insufficient to tackle the challenge and would lead to the public taking on the risks of investment, while leaving the benefits to private capital. Contrastingly, the COVID-19 pandemic how important public investment is, and how governments (at least in advanced countries) can massively scale up public expenditure when needed.

Ghosh then summarized her vision of a “Multicolored New Deal,” that would be green and blue to address destructive impacts on climate, nature and water; purple to better invest in and value life-giving care work; and red to be redistributive, reversing the flow of resources to the richest,making sure that multinationals and the extremely wealthy pay their fair share of taxes and providing people’s basic needs in universally affordable quality services. This includes finding innovative policy tools such as a reallocation of Special Drawing Rights (SDRs) towards needs such as global vaccination and social protection. According to Ghosh, this won’t be achieved by appealing to the better nature of leaders but will have to be demanded by the global public.”

The first question, for Fakir, centered on how policymakers can best take advantage of this moment for a best-case scenario. He noted the mere presence of China in Africa has allowed many countries to leverage and challenge asymmetric relationships with other powers. African countries can use the opportunity to continue thinking about unified strategy – such as with the African Continental Free Trade Agreement.

The next question, for Han Springer, asked if the notion of “healthy competition” can keep warming below 1.5C. She responded that a mix of competition and collaboration is needed. Competition in the private sector can help develop vital technologies, and a different approach will be necessary to move out of the “trade war” mindset. There are some positive examples of collaboration, but these are not widely discussed. Collaboration could also mean the West learning from China on policy design; for example, the Chinese carbon market could be a learning opportunity for the US to build its own national regulation system. Han Springer noted this goes both ways, as green public procurement for infrastructure represents a large proportion of public spending in the West, and current plans for carbon intensity standards that direct industry towards reducing emissions would be important for China to consider.

Considering B3W is focused around mobilizing private finance, Ghosh was asked how this can be compatible with her point about the need to invest in care work. She responded that the major flaw of many recovery plans is the absence of care. Too much focus has been placed on physical infrastructure, while the life-giving role of social infrastructure has been hugely ignored. Both the BRI and B3W are guilty of this. This underscores the importance of public investment in any recovery strategy to generate employment and improve quality of life.

The speakers then made their final comments before closing.

Fakir restated the need to look at the entire architecture of Bretton Woods Institutions and how ready they are to take on the climate challenge; for example, why the global phase-out from coal should lead to indebtedness for developing countries when historically they have done the least to contribute to climate change.

Han Springer made the case for public actors to ramp up action on the financial sector to incorporate transition and physical climate risks on their activities.

Ghosh agreed on the need to bring in more climate conditions on private companies. She concluded with key areas for civil society to continue the pressure: by increasing the global minimum tax rate undergoing negotiation to at least 21 percent; dropping Investor-State Dispute Settlement mechanisms, which hold back climate action from trade and investments agreements; vaccinating the world by waiving patents, forcing technology sharing and financing COVAX; cancelling bilateral debts and encouraging MDBs to do the same; and ending the regressive conditionalities which reduce health spending while increasing debt service.

To receive updates on upcoming events and publications, subscribe to updates from our Global Economic Governance Initiative.