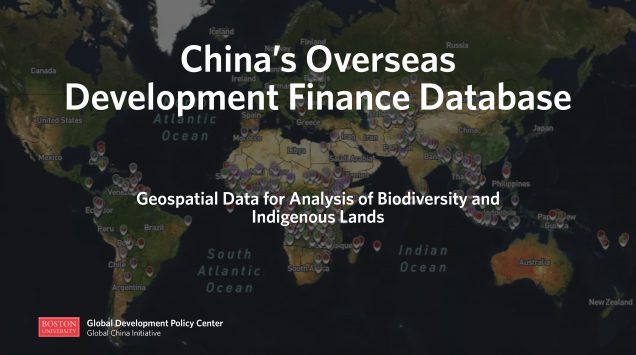 The China’s Overseas Development Finance Database is a geospatial dataset for analysis of China’s sovereign lending commitments and their proximity to critical habitats, national protected areas, and indigenous peoples’ lands.

The dataset provides insight into the sizeable quantity of this relatively new source of global finance, as well as its geographic locations, sectoral distribution and proximity to sensitive and ecological territory – critical habitats, national protected areas, and indigenous peoples’ lands.

However, China’s development lending has varied more over time than the World Bank’s sovereign lending. China’s finance commitments peaked during the 2009 financial crisis before falling again. After the 2013 announcement of the Belt and Road Initiative, China’s lending grew significantly for several years, and then tapered dramatically as China’s economic growth slowed in the last few years. It remains to be seen how active China’s lending will be in 2020 and beyond, as the world recovers from the current economic crisis brought on by the COVID-19 pandemic. 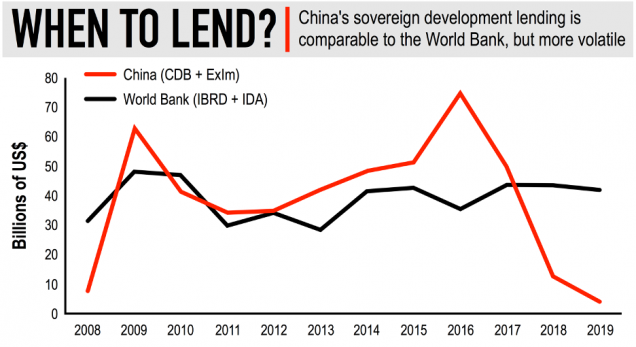 While observers are right to express concern about potential debt distress, the database shows that Chinese finance is highly concentrated among a few countries. This new dataset will allow an empirical, fact-based analysis of debt sustainability, with greater accuracy and relevance to the experience of borrowing countries. 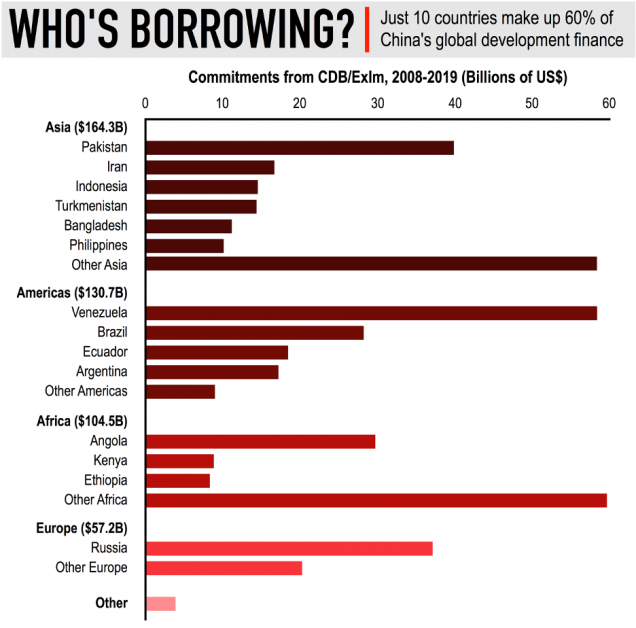 China has also become a global infrastructure powerhouse, reflecting the goals of the Belt and Road Initiative. Over half of the finance commitments listed in the dataset — $249 billion – went to construction of infrastructure projects, particularly in the sectors of transportation and power generation and distribution.

This amount is undoubtedly an underestimate, as an additional $114 billion has also been earmarked for oil, gas, and mining extraction, including the pipelines to transport these products. For example, the fourth-largest loan in the dataset is for the Russia-China Oil Pipeline, a $10 billion deal signed in 2009 between CDB and Rosneft, the Russian state-owned oil company.

In addition, nearly $60 billion in finance was signed to support groups of projects in multiple sectors, including many loans with infrastructure segments. The third-largest deal in the dataset follows this pattern: approximately $14 billion for Venezuela to spend on transportation, power generation, heavy industry, and public housing.

Thus, a significant majority of Chinese development finance has supported infrastructure projects, cementing China’s place as a major driver of that sector worldwide. 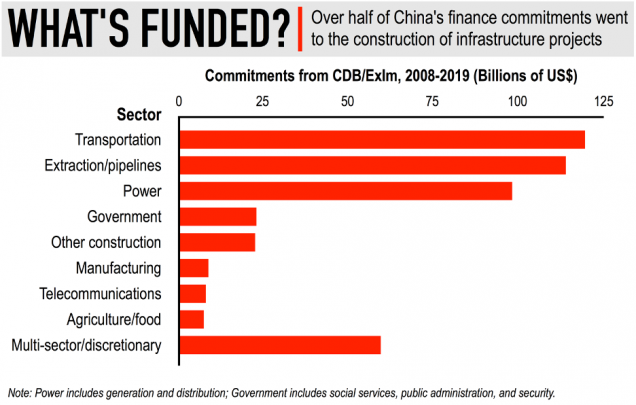 Of the 615 physical projects, 124 are within national protected areas, 261 are within critical habitats, and 133 are within indigenous peoples’ land. 150 projects, particularly those in Southeast Asia and the Amazon basin, overlap with multiple categories of sensitive territories.

Critical habitats (habitats recognized by the International Finance Corporation to be of great biological importance) and national marine and terrestrial protected areas were considered as ecologically sensitive territories to include based upon their contribution to biodiversity and national (and international) conservation targets. Indigenous peoples’ lands are also included, as projects within these territories may bring greater risks of social and political conflict over indigenous rights and welfare.

While it is promising that many of China’s loans do not overlap with these sensitive territories, the database reveals where risks may be greatest, and where stakeholders can look to ensure sustainable and ethical development, while mitigating potential impacts on biodiversity.

This dataset represents over a year of work by a team of Global Development Policy Center researchers compiling, validating, and locating hundreds of financing records.

In compiling the data, the methodology included significant attention to applying consistent rules for validation across all observations. A “double verification” method was established, representing the highest standard that could be applied globally, to countries with widely varying levels of government transparency. To meet this standard, each record had to be supported by evidence from official Chinese government sources or Chinese government-associated media reports, in addition to host-country, or international reports, preferably by government supervisory agencies.

Overall, the methodology consisted of several broad steps. First, all records from existing datasets were compiled and each record brought to the “double verification” standard, keeping only those records that passed.

Secondly, a custom web-scraping algorithm was developed to gather records from years and countries not included in any existing datasets, with these records then brought to the same “double verification” standard.

Third, project records, media reports, and company websites were scoured to find the most precise locations possible for each of the projects.

The online interactive dataset includes only those records that could be located at the municipal level, or with even greater precision. In addition to the 615 projects listed there, 50 more projects could be located at the regional, provincial, or national level, and 193 had no geographic footprint at all (for example, trade credit for the purchase of Chinese goods).

Finally, the records were compared to three types of socially and environmentally sensitive territories, chosen for their importance and the existence of standardized global definitions: national protected areas, indigenous peoples’ lands, and critical habitats.

A full dataset — including complete geographic footprints for each project and records for those projects without any geographic footprint at all – is currently out for peer review and will be available once it is published. A series of papers based on this data are also forthcoming.