As China becomes an active participant in the global power sector, the world is paying increasing attention to Chinese projects overseas. While there has been data and research dedicated to discussing China’s policy bank finance (see for example here and here) and foreign direct investment (FDI) in the energy sector, the “China’s Global Power Database” (CGP) developed by the Global Development Policy Center (GDP Center) is the first database to systematically analyze and compare these two major types of Chinese capital participation in the global power generation sector.

Some of the main findings from the database include:

Table 1: Top 15 Countries with the Most Power Generation Capacity with Chinese Investment and Finance 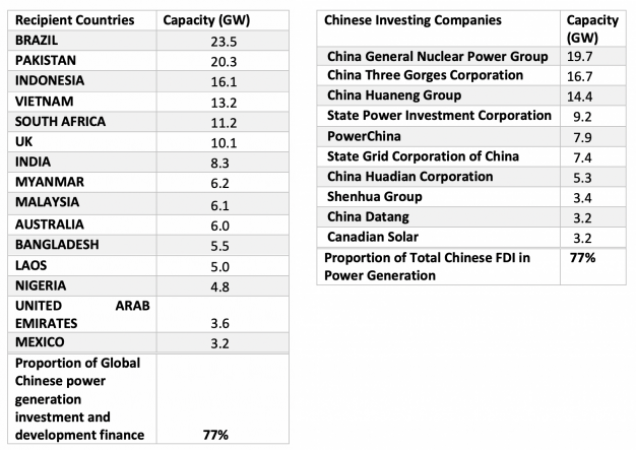 Even at the global investment level of 2019, the amount and composition of power generation investment is still far behind the annual investment in clean energy needed to hold the increase in the global average temperature to well below two degrees Celsius above pre-industrial levels, including in China, the United States, and the EU. In the current context of the global COVID-19 pandemic, IEA predicts overall power investment around the world is set to decline in 2020 by an estimated ten percent.

The CGP Database shows China’s fossil fuel power plants are currently adding approximately 314 million tons (Mt) of CO2 emissions per year, which is about 3.5 percent of the annual CO2 emissions from the global power sector outside of China. Assuming all fossil fuel projects under construction or planning come online by 2030, they will add another 211 Mt to annual CO2 emissions. Assuming no retirement by 2030, accumulative CO2 emissions from 2018 onward from these fossil fuel power plants will reach approximately 5.9 gigatons, which would consume 1.3 percent of the global carbon budget for a 66 percent chance of limiting global warming to 1.5°C, according to the Intergovernmental Panel on Climate Change (IPCC) Special Report.

Although levels of China’s FDI and overseas contracting and engineering of the first eight months of 2020 has been relatively stable, global power sector investors are faced with unprecedentedly challenging times. Nevertheless, the power sector could be a significant driving force for sustainable economic recovery. Policy support from China, recipient countries, as well as multilateral institutions, will all be crucial to recovery efforts.

In times of economic uncertainty, clear and up-to-date host country policies could be crucial to attracting investments in key sectors, such as power infrastructure and especially for renewable energy in developing countries. Countries could design different types of investment deals  according to the market structure and public budget circumstances, and appeal to diverse development institutions for financial support.

As China receives increasing attention in its global engagement, it is particularly important to understand that “Chinese” actors come in various shapes and forms. Different actors play different roles in investment decisions and ownership, with distinct implications for countries’ public balance sheets. The CGP Database enables more nuanced analysis of investment and finance activities with the participation of Chinese actors, and could be used to inform decision making for policy makers, market participants, as well as civil society.