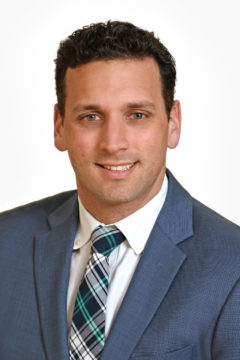 Dr. Alosco is a licensed clinical neuropsychologist. He completed his undergraduate studies at Providence College and he earned his doctoral degree in clinical psychology, with a focus on neuropsychology, in 2015 from Kent State University. He completed his clinical internship in neuropsychology at the VA Boston Healthcare System. Dr. Alosco completed his post-doctoral studies in neuropsychology via NIH-funded training Awards (T32, F32) at the Boston University Alzheimer’s Disease Research Center and CTE Center. In 2018, he became an Assistant Professor of Neurology at the Boston University School of Medicine and immediately received NIH/NINDS K23 Award. He was promoted to Associate Professor in 2019. Dr. Alosco has published extensively in the fields of Alzheimer’s disease and related dementias, including CTE, and he is the PI of multiple NIH-funded grants. His research has set the stage for biomarker discovery in CTE and the long-term effects of repetitive head impacts on the white matter, and he has made major contributions to plasma biomarker development and validation in Alzheimer’s disease. He has written numerous book chapters, and he is the co-Editor of the Oxford Handbook of Adult Cognitive Disorders which was published by Oxford University Press in 2019.

Dr. Alosco is a lead investigator of the BU CTE Center. He is the Project Lead of a multisite NIH/NINDS-funded U54 that is examining the late neuropathologies of exposure to repetitive head impacts and TBI and resulting clinical syndromes. He conducts clinical interviews with family members and other caregivers of deceased athletes who donate their brains to our Center. He oversees studies on risk factors and clinicopathological correlations of CTE. Dr. Alosco leads human subject studies devoted to biomarker development for CTE and the long-term effects of repetitive head impacts on the white matter and vasculature. These studies include the Focused Imaging for the Neurodegenerative Disease-Chronic Traumatic Encephalopathy (FIND-CTE) study and the Study of Axonal and Vascular Effects (SAVE) from repetitive head impacts. FIND-CTE and SAVE are collaborative efforts with the University of California, San Francisco (UCSF) that are evaluating the ability of PET imaging and other neuroimaging techniques to detect CTE and related pathologies from repetitive head impacts.

Dr. Alosco is the Director of the Clinical Core and the Director of Neuropsychology at the Boston Medical Center Memory and Aging Clinic. In this role, he assists with the oversight of all clinical core operations of the ADRC. Dr. Alosco has specific responsibilities for all operations related to the neuropsychological evaluations that are done as part of the BU ADRC. He participates in weekly multidisciplinary diagnostic consensus conferences to assist with the clinical diagnoses for participants enrolled in the ADRC Clinical Core.

Dr. Alosco has an active and established research program that has a thematic focus on the following: (1) the development of in vivo biomarkers for CTE, AD, and AD-related dementias (ADRD); (2) the relationship between RHI with cognitive and neuropsychiatric decline, and neurodegenerative disease(s); and (3) the contribution of cerebrovascular disease to the clinical and neuropathological expression of CTE and AD/ADRD.

Dr. Alosco has received numerous awards related to his research and productivity, including the 2021 Boston University School of Medicine Spivack Emerging Leader in Neuroscience Award. He has been the recipient of multiple NIH awards. He has had numerous invitations from institutions across the country as well as internationally to present on his research. He is an active member of the Society for Clinical Neuropsychology of the American Psychological Association, as well as the International Neuropsychological Society. He serves as an Associate Editor for the Journal of Alzheimer’s Disease.