Article and photos by Christian Cole

Over 200 feet above campus, a red elevator door clinks open. “Floor 15,” the operator announces. We thank him for the manual ride up the core of what will be the future Center for Computing & Data Sciences. Turning left out of the elevator, an open construction site unfolds. The fresh concrete and various equipment quickly fade away, dwarfed by the awe-inspiring view of Boston in the background.

At right around 300 feet, the Center for Computing & Data Sciences is now one of the tallest buildings on campus. The building was topped off with a ceremony on September 30th of this year, but work is far from complete. Recently, a large milestone was achieved with the removal of the shoring beams that were required to realize the unique architecture modeled after a stack of books. Before November, the tower portion of the building looked almost square with the temporary supports still in place.

“In the summer we were definitely getting a lot of people stopping by questioning [the building],” said Luke Apone, a Project Manager with Compass Project Management. “People see the rendering and then see a different product because we’re building it with the shoring – we get a lot of questions like that – why does it look different than it looks in all the pictures around the fence.”

David Smythe, a Senior Associate with the architecture firm that designed the building, KPMB, explained the intricate staging of this process.

“The steel structure of the building and the [numerous] cantilevers [had] to be supported until it [was] all built,” Smythe explained. “Because taking away any kind of shoring steel at any one moment from one corner would have an adverse effect – it’s a very dynamic situation how the steel takes all the loads and if you don’t do it correctly and in sequence then it might put more loads on one corner of the building that it wasn’t designed for.” 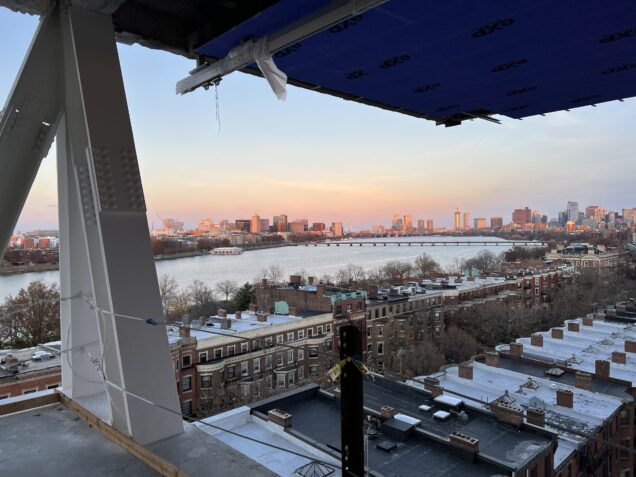 Smythe explained that the building was constructed with the anticipation that, after the temporary shoring beams were removed, the cantilevers (the parts of the building that do not have any support underneath) would drop as much as ¾ of an inch.

“Given the scale of the building it’s not a big thing,” Smythe clarified. “However, the removal of these beams was still a large milestone with many moving parts. […] The most recent big [milestone] for us, the architect, was to see the shoring steel come out so you could see the shape of the building that was sort of disguised.”

“From the owner’s side and the contractors’ side that was a big [safety] risk,” said Apone. “So getting that done was huge. 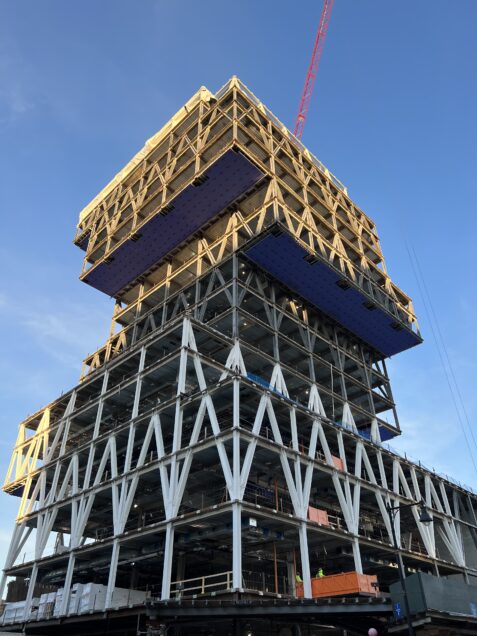 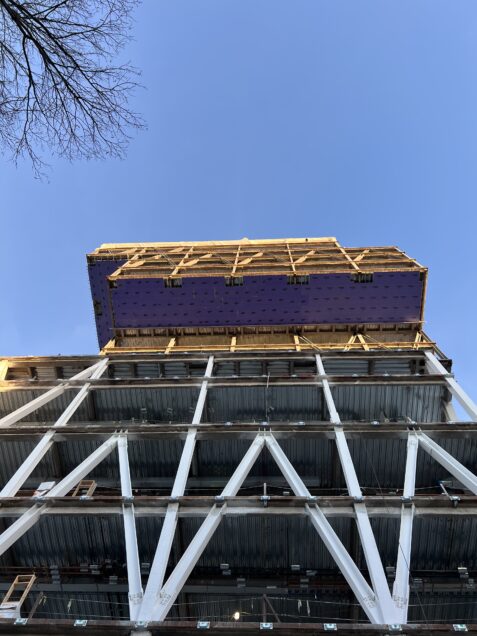 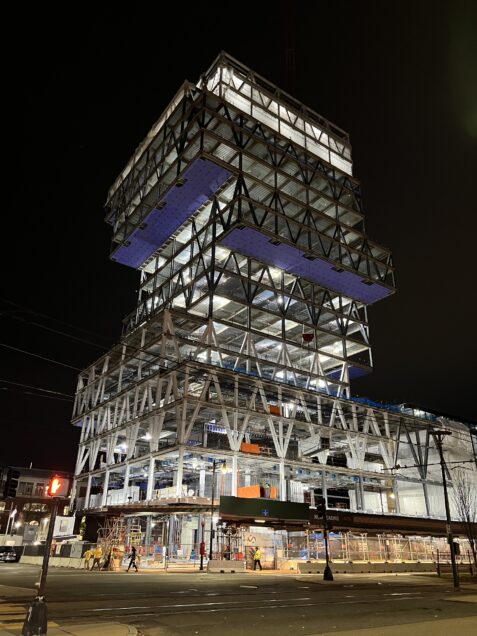 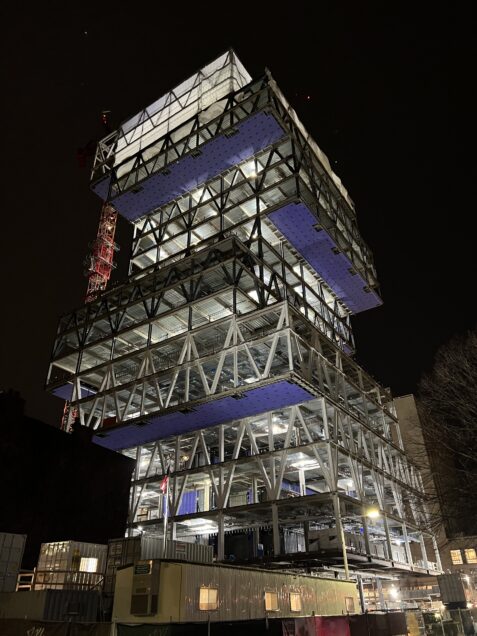 Next up, the tower portion of the building will start to be enclosed with glass panels similar to those on the podium. This “glazing,” as it’s called, was not able to be installed until the shoring beams were removed.

“You have to wait until the building’s settled before you start adding more weight to it. When the curtain wall gets added [the cantilevers] will fall a little bit more, but that’s why the curtain wall had to wait and that’s been a real challenge with the schedule,” said Smythe. “The schedule is already quite challenging and aggressive with the scale of the building.”

The Center for Computing & Data Sciences has had a remarkable journey from its very beginning when the concrete slab it now sits on was poured.

“The initial digging of the hole and the foundation was substantial and pouring that one large mat,” said Smythe. “5,000 cubic yards of concrete – one of the largest pours in the City of Boston.”

“The third largest pour in the City of Boston,” Apone added. 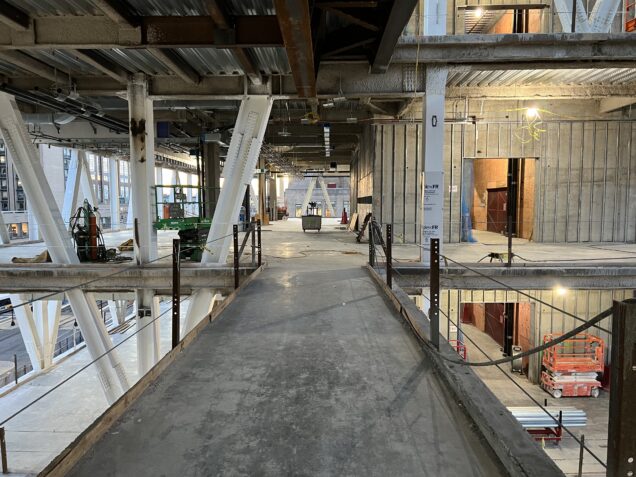 The sustainability of this building began at the very beginning when this slab was poured and the concrete used was mixed with a substance called fly ash.

“We had a target for the amount of fly ash which is carbon offsetting,” explained Smythe. “[…] cement is energy-intensive and costly to produce, [but we] produce[d] it with fly ash which is basically a waste material from the coal industry – so it [was] just sort of a double-whammy there of carbon capturing.”

Fly ash is just one of the many remarkable features of this building in regards to sustainability. Beyond low-flow water fixtures that Smythe explained are now standard for buildings, the interior fixtures and treatments will be low in gases called volatile organic compounds, or VOCs. These gases are responsible for the chemical smells you might have experienced in a freshly-painted room or after opening a new piece of furniture. Lower amounts of VOCs are associated with better indoor air quality and better health and well-being for building occupants. As for lighting, each office will have a daylight sensor to monitor how much artificial light is actually needed.

“If you’re getting the light levels you need from just natural light – [the sensor] controls the light level,” said Smythe. “It’s not just an on/off switch where you’re wasting light energy.” 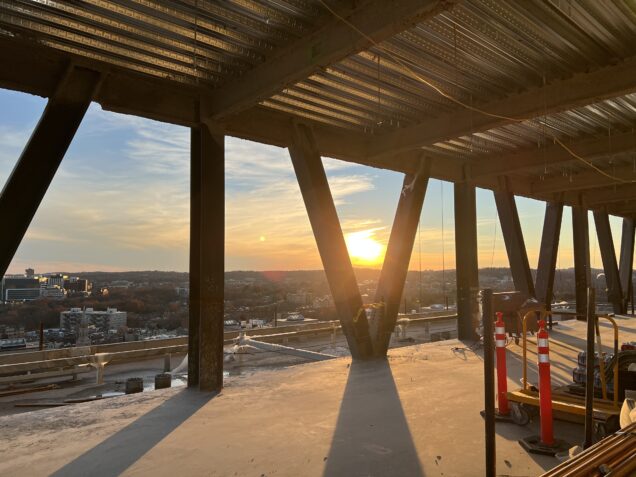 Even the glass panels that will soon start climbing the tower are designed for energy efficiency. With triple-glazing and exterior treatments positioned in a way to decrease solar loading, the building will keep out cold air in the winter and will require less cooling in the summer.

Perhaps the most remarkable sustainability feature of this building, however, is how it will heat and cool the space inside. Before the foundation was even poured, over 30 wells were drilled 1,500 feet into the Earth to feed the building’s geothermal system. Apone explained more about how this system works.

“There’s a steel casing that goes down, and then there’s another plastic pipe that does a loop in that casing – water runs through that,” he said. “[This] transfers the energy from the earth to the water [for] heating and cooling. They tie together in a circuit [and] those [circuits] run into a head exchanger [which] transfers the heat and the cooling and runs it up through the building.”

Eventually, the Center for Computing & Data Sciences will aim to be certified as Platinum by the U.S. Green Building Council’s Leadership in Energy and Environmental Design (LEED). To achieve this milestone, the construction team is required to track everything they use. “Every single material in the job has to […] fill out a LEED materials form that documents [factors such as] how far away it’s coming from, what its recycled content [is],” said Smythe. 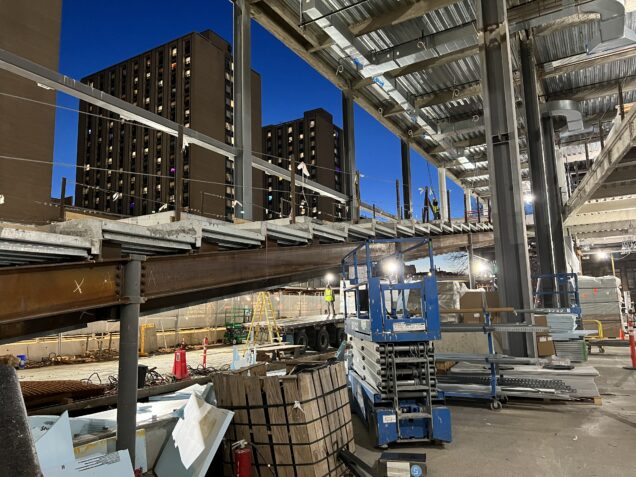 With just under a year of construction remaining, the focus is now on fully enclosing the structure and getting it weather-tight during the winter. While one might expect the dropping temperature to be a formidable challenge, Apone explained that wind is the important factor. “With the wind these panels would essentially turn into sails when you get higher up in the building,” he said. “The cranes have limits they can operate on so that would be a factor there. Temperature-wise, [it] shouldn’t be a problem.”

After that, it’s just the interior that remains.

“From there on it will be finishes and then a race to the finish,” said Apone.

The Center for Computing & Data Sciences is scheduled to have construction completed on October 28, 2022 with a targeted opening to the community set for the spring semester of 2023. 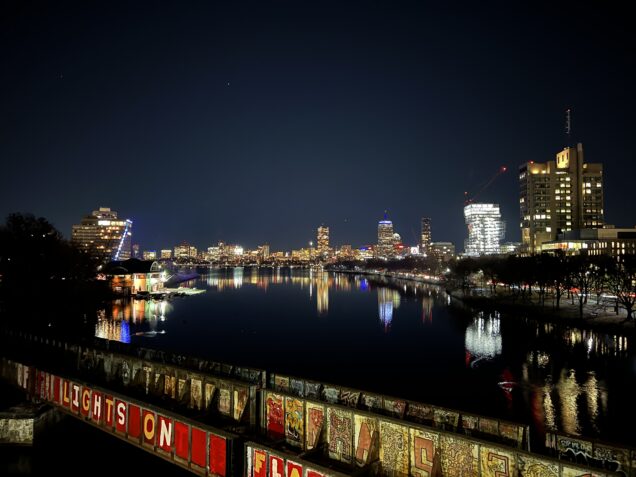