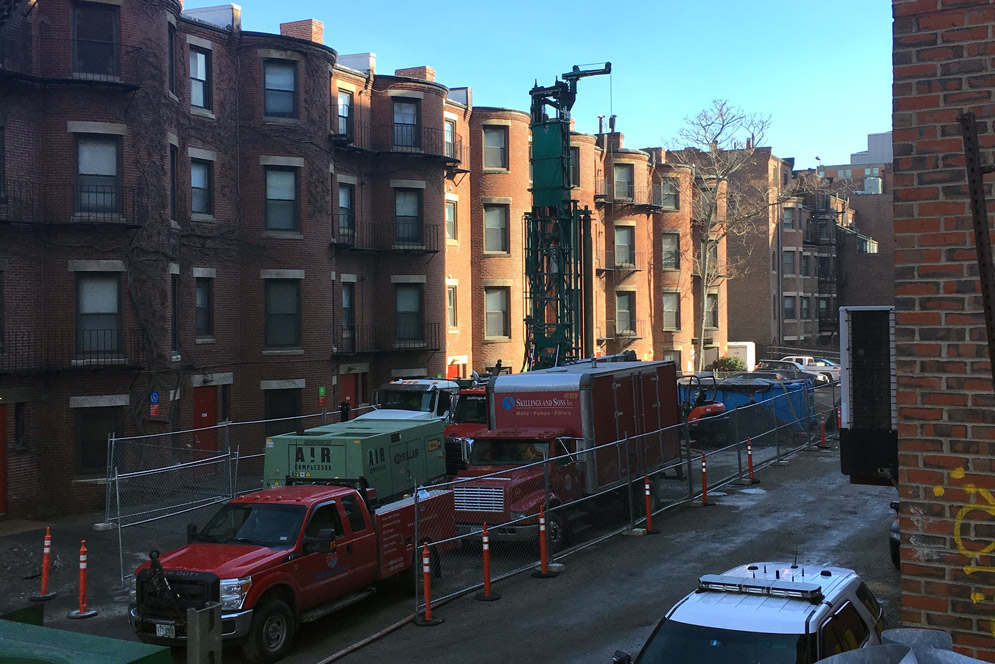 If you’ve been anywhere near Boston University’s East Campus recently, you may have heard the echoing sound of drilling, particularly near the corner of Commonwealth Avenue and Granby Street. That’s where the BU Data Sciences Center is slated for construction, and the drilling activity is the first step in a historic initiative to make the new building Boston’s largest to be heated and cooled by ground source heat pumps, aka geothermal energy.

“We’re pushing the envelope—this will be the biggest geothermal project in Boston yet,” says Dennis Carlberg, associate vice president for university sustainability. “If you look at the University’s Climate Action Plan and the Institute for Sustainable Energy’s Carbon Free Boston report, geothermal technology lays out an essential path toward that goal.”

Although the 17-story Data Sciences Center won’t be the only geothermal building on BU’s campus—the building spanning 882 to 888 Comm Ave is already heated and cooled by six geothermal wells—it will easily be the most ambitious. The eventual construction of the Data Sciences Center, which is planned to kick off in late 2019 to early 2020, could require up to 30 wells to access enough geothermal heating and cooling capacity to control the temperature of the high-rise.

Geothermal technology works by taking advantage of stable temperatures found beneath the Earth’s surface. About 1,500 feet down (the depth of the test wells being dug at the Data Sciences Center site), the subterranean temperature is typically 50 to 60 degrees Fahrenheit.

“A closed-loop piping network controls building temperatures by circulating fluids from which heat is extracted in the winter, when the subsurface is warmer than the air,” says hydrogeologist John Kastrinos, the design team lead from Haley & Aldrich, a Boston-based environmental and engineering consulting firm. “In the summer, the building is cooled by rejecting heat from the building through the same circulating fluids in the closed loop, taking advantage of the cooler temperatures in the subsurface.”

By utilizing geothermal technology for both heating and cooling, the system essentially balances itself—using the heat rejected in the summer to help warm the building in the winter, Kastrinos says.

Geothermal heating and cooling has been endorsed by the Department of Energy and the Environmental Protection Agency for its energy efficiency and environmental friendliness. The technology is already popular with certain US businesses and homeowners; more than 50,000 new systems are installed in the United States each year.

But the bigger the building that needs to be heated and cooled, the greater the number and the depth of the wells required, making the technology extremely expensive when it comes to large-scale projects. Carlberg says he hopes the Data Sciences Center project will be educational for other institutions in Boston and beyond.

“We’re already setting the groundwork for workshops to teach others how to get this done,” he says.

Although construction of the Data Sciences Center is not yet underway, three different well-drilling techniques are being tested. And the thermal properties of the different well sites are being evaluated to estimate how much geothermal heating and cooling can be generated from the subterranean.

“It’s been a little louder and more disruptive to campus than we would prefer,” says Chris Kenney, a Compass Project Management senior project manager. The first two test wells have already been completed, he says. Due to a difference in the drill equipment, the third well, which will begin installation in March 2019, isn’t expected to create as much noise as the first two.

Beyond the equipment, Kenney says, other factors can impact noise levels, such as the surroundings and their effect on echoes. The first well was dug in an open parking lot, but the second was dug in a tight alley. The third well will be on the southeast corner of the park on the corner of Granby and Bay State Road.

Carlberg understands the disruption the noise causes, but he stresses the long-term benefits the wells will eventually have. The three test wells will offer up important insights that will set the stage for the full installation of the planned geothermal system. Most important, he says, the test wells will provide critical information about the geology—and its capacity to provide the necessary heating and cooling—underneath the building site.

“Geology varies and the greater Boston area is not uniform by any means,” Carlberg says. “Even within the building site location there could be significant variation in the depths of urban fill, silt, clay, and bedrock layers.”

The test wells—which are nearly a third of a mile deep yet only six inches wide—will reveal which of three different drilling methods performs best. The first two wells were created by drilling methods that use compressed air to clear the borehole of bedrock “cuttings” and groundwater—the first well was dug using drilling fluid to keep the borehole open while the second was not. The third test well will be installed using water to clear the bedrock debris cut by the drill bit. The site team is watching closely—factoring in the unique geology of each well location—to see which of those three drilling techniques can complete the wells fastest and with the most agile drill rigs and support equipment.

“Test well number one took three weeks to drill and the rig was hitting a ton of groundwater, at times causing 200 gallons of water to gush up per minute,” says Walt Meissner (CFA’81), BU’s associate vice president for operations and project executive for the Data Sciences Center building. In contrast, Meissner says, test well number two achieved the required 1,500-foot depth in just four days and generated less than 20 gallons of water per minute.

According to project hydrogeologist Kastrinos, the amount of groundwater is the biggest source of variability that he’s looking for between the different well locations. “Groundwater flows don’t affect the well design, but they require management during drilling to avoid flooding the site and they slow the well production rate,” he says.

Speed isn’t the only priority, however. The test process will also help determine which drilling technique creates the straightest boreholes, and that will affect the design team’s decisions on well spacing and depth. Holding open a six-inch-wide borehole plunging 1,500 feet into the earth is no simple feat, Kastrinos says, and each drill technique may have a different effect on the overall outcome and integrity of the wells.

The team will lower sensors into each of the wells to take measurements of ambient underground temperatures every 100 feet, he says. They will also measure thermal conductivity and borehole thermal resistance, which will allow them to estimate the heating and cooling capacity of the planned wellfield.

Because of the limited space available on the tight urban site, Carlberg expects it will be difficult to build a large enough geothermal wellfield to meet 100 percent of the building’s heating and cooling needs.

“It is anticipated that the wells will provide the energy the building needs for heating and cooling throughout the year, except at peak periods when electricity will supplement the geothermal system, running air-cooled chillers in the summer and condensing boilers in the winter,” Carlberg says. “The thermal testing underway will determine how the engineers will size these systems for peak periods.”

With the first two wells already completed, Kastrinos is optimistic. “The fact that we got to depth—despite it being a struggle on the first hole, which took us a couple of weeks—that’s a small win,” he says. “It’s a good sign, but we still have a lot of data to work through.”

There are 6 comments on Historic, and Loud, Geothermal Drilling Gets Underway

Historic, and Loud, Geothermal Drilling Gets Underway
6
share this