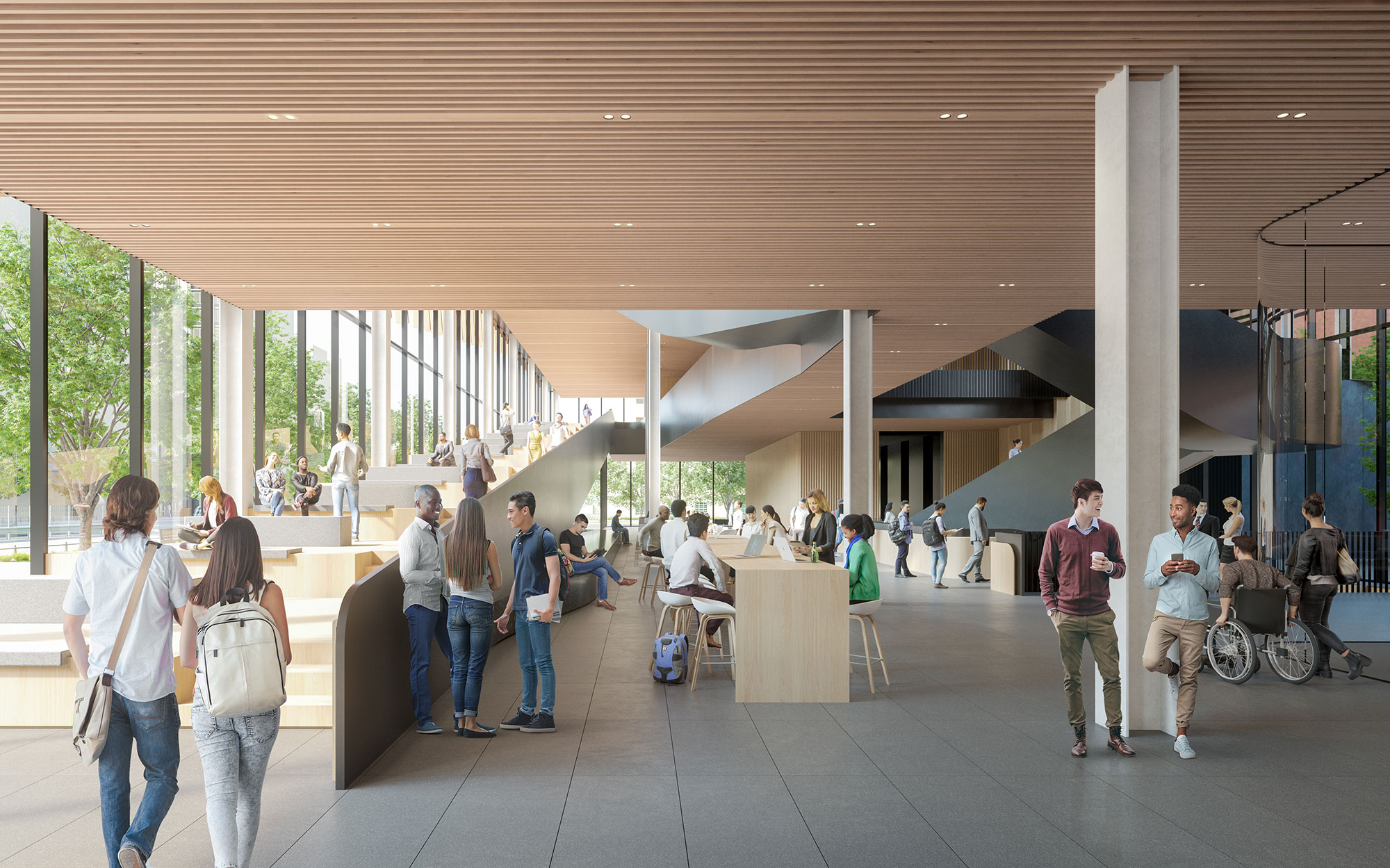 At 19 stories tall and nearly 350,000 square feet, the BU Center for Computing & Data Sciences, to be built at the corner of Commonwealth Avenue and Granby Street, will be one of the biggest buildings in the University’s 180-year history.

And with geothermal wells, state-of-the-art shading, unusually thick windows, and ultracool staircases that invite people to climb them, among other features, it will also be the University’s most sustainable, energy-efficient building ever. The building will be 100 percent free of fossil fuels, an effort that aligns with the University’s broader Climate Action Plan, which aims to reduce BU’s carbon emissions to zero by 2040.

“This project is on the cutting edge to lead the state and region in sustainability,” says Dennis Carlberg, associate vice president for university sustainability.

The center, with a projected spring 2020 groundbreaking, is expected to be completed sometime in 2022. Here are just a few of the building’s most interesting sustainable elements:

The Center for Computing & Data Sciences will be 100 percent fossil fuel–free, the first building on any BU campus to make that claim. No gas line will be connected to it, explains project engineering lead Jacob Knowles, associate principal for BR + A Consulting Engineers. “BU said this was important, for us to be fossil fuel–free,” Knowles says. Geothermal wells will provide the majority of the heating and cooling inside the building. Even the building’s BU Dining Services facilities will function without gas. “It’s a big challenge,” says Carlberg. “But they are embracing this challenge of preparing food without natural gas. Absolutely embracing it.” Joseph LaChance, director of Dining Services, says pretty much anything they make can be prepared with electric cooking. “Yes, there are challenges and air circulation issues,” he says. “But as there are demands for more sustainable processes, the technology continues to evolve. I’m confident we’ll have some great solutions.”

The building will have cutting-edge exterior shades to control the solar heat gain inside and reduce glare that can make seeing computer screens and whiteboards particularly challenging. People inside won’t have to worry about raising or lowering their shades to suit their individual needs. “The shades are fixed,” Carlberg says. “They prevent direct sun from entering the building during much of the day. They keep the sun’s energy out when you need to cool the building.” The external shades will prevent heat energy from entering the building, he says, and therefore less cooling will be needed during the summer.

The windows will be triple glazed. What does that mean? It means the heat in the building will stay in the building better. And the hot or cold air outside will have a much harder time getting in. Most buildings have double-glazed windows. That means two layers of glass are sandwiching one pocket of space filled with gas for insulation (usually argon). But triple glazing means there are three layers of glass, and two pockets of space filled with gas. Having “two gaps is better than one gap,” Carlberg says. And, he adds, there won’t be a cold piece of glass sitting next to you in the winter. “Triple glazing was very important here, to reduce energy loss,” he says. “If we did double glazing, we would have had to add a heating system around the perimeter of the building. If you’ve ever sat next to a big plate-glass window, you can feel a cold draft.”

As much as we all love the smell of a new car, it’s actually not really healthy to breathe in. It’s chemicals, most of them completely unnecessary. The Center for Computing & Data Sciences won’t smell like a new building—intentionally. “We reduced the amount of chemicals and compounds in the air, which are not good for us,” Carlberg says. “We chose sealants and finishes for the building that have low or no volatile organic compounds. It’s better for people.”

Here is your choice: pushing a button, standing and waiting, and finally stepping into a dark, enclosed elevator. Or walking up a brightly lit staircase with views of the outside that are flat-out cool to look at and even cooler to climb. The hope of the center’s architects and designers is that the interior’s “irresistible staircases,” says Carlberg, will “promote physical activity.” It’s an investment in the health of the people in the building by promoting walking up and down stairs rather than pushing a button, standing still, and taking an elevator up 3, 4, 8, or 15 flights, he says: “You’re drawn to them. They have natural light, and they are cool sculptural elements.”

Because the center is close to the Charles River, numerous steps were taken to ensure that in the event of rising water or a sudden storm surge, the building would not be in danger of serious flood damage. BU’s Climate Action Plan establishes an “elevation of resilience,” meaning that the building is set two feet above the elevation of the Charles River dam, and the first floor is above that. In total, the building is five feet higher than the city of Boston’s suggested level for sea level rise. This gives it better protection from flooding, Carlberg explains. Generators in the building will kick in if necessary to prevent any freezing in the building if power were to go out.

Carlberg says that sustainability is about much more than being eco-friendly in materials used. “Sustainability is a three-legged stool,” he says. “Environmental, economic, social.” To that end, the center is designed in a way that promotes social interaction, with compelling spaces for collaboration. “This is important,” he says, “because from an energy perspective, people are less likely to use the elevators if more of the spaces are used in an interactive way.”