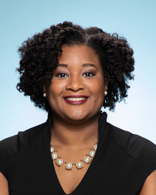 We are proud to announce that Professor Malika Jeffries-EL has been named one of the 2018 ACS Fellows. The purpose of the ACS Fellows Program is to recognize and honor members of the American Chemical Society for their outstanding achievements in and contributions to the science and the profession and for their equally exemplary service to the Society. The ACS Fellows Program uniquely recognizes a different standard of achievement and service.  Specifically, the Fellow of the American Chemical Society (ACSF) designation is awarded to a member who, in some capacity, has made exceptional contributions to the science or profession and has provided excellent volunteer service to the ACS community.

Dr. Malika Jeffries-EL and her research group focuses her research interests on the development of organic semiconductors–materials that combine the processing properties of polymers with the electronic properties of semiconductors. Prior to joining the Department of Chemistry in 2016 she was as Associate Professor at Iowa State University, most recently serving as a Martin Luther King Jr. Visiting Professor at MIT. She has been honored twice previously by the ACS with an ACS Women Chemist Committee Rising Star award in 2012 and a Stanley C. Israel Regional Award for Advancing Diversity in the Chemical Sciences in 2015.

Dr. Jeffries-EL has consistently been an active member of ACS having served on the editorial advisory boards for Macromolecules and Chemical and Engineering News. She has served in several activities within the American Chemical Society including the advisory board for the Women Chemist of Color Program, executive member of the Division of Organic Chemistry, Program co-chair for the Polymer division, member of the Society Committee on Education and councilor for the Ames local section. She is currently an Associate Editor for the Journal of Materials Chemistry C, a publication of the Royal Society of Chemistry.

Professor Malika Jeffries-EL will be celebrated as an ACS Fellow during the 256th National ACS Meeting and Exposition’s induction ceremony on Monday, August 20, 2018, at the Sheraton Boston Hotel, Grand Ballroom, from 2 p.m. to 4:30 p.m.

Dr. Morton Z. Hoffman is the 2018 recipient of The Zaida C. Morales Martinez Prize for Outstanding Mentoring of ACS Scholars 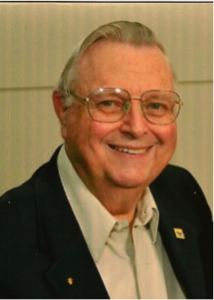 Dr. Morton Z. Hoffman, Professor Emeritus in the Chemistry Department of Boston University, is this years recipient of The Zaida C. Morales Martinez Prize for Outstanding Mentoring of ACS Scholars. This prize was initiated by Dr. Robert L. Lichter and his wife Diane Scott Lichter with a grant from the Camille and Henry Dreyfus Foundation. The annual $1,000 prize recognizes individuals who have done an exemplary job in mentoring students in the ACS Scholars Program. It is named in honor of Ms. Morales-Martinez, the mentoring consultant for the ACS Scholars Program, who was instrumental in the establishment of the Scholars Program and other initiatives to address the need to increase the presence and participation of underrepresented minorities in chemical science.

A native of New York City, Mort Hoffman attended Hunter College and received a Ph.D. in physical chemistry from the University of Michigan. He spent a year as a postdoctoral research associate at Sheffield University in England before joining the chemistry faculty of Boston University in 1961. His research focused on the photophysics and photochemistry of transition-metal coordination compounds, with an emphasis on the fast kinetics of excited-state electron-transfer and ligand-labilization processes. Supported over the years by NIH, NSF, DOE and DOD, his research expanded to the conversion and storage of solar energy and the use of nanosecond pulsed-laser techniques to probe excited-state behavior. He also collaborated with faculty, senior scholars, and scientists from Italy, France, Germany, Greece, England, Israel, and Japan. He has authored over 200 articles and book chapters, of which undergraduates serve as coauthors on 23 and graduate students on 37.

Over the course of Dr. Hoffman’s career, 40 students have worked with him as a mentor and coach, and 20 ACS Scholars developed mentoring relationships with him. Many of these students have transitioned into industry, health care, law, and education careers since then. Dr. Hoffman taught a number of undergraduate and graduate courses, including general, physical and analytical chemistry, chemical kinetics, photochemistry, and radiation chemistry. Remembered by tens of thousands of students for his theatrical lecturing style, dramatic chemical demonstrations, innovative pedagogies, and outrageous jokes and puns, he was honored in 1994 with the Metcalf Cup and Prize for Excellence in Teaching from Boston University, the Catalyst Award for Teaching Excellence from the American Chemistry Council in 2002, the John A. Timm Award for Encouraging Young People to Study Chemistry from the New England Association of Chemistry Teachers (NEACT) in 2003, and the James Flack Norris Award for Outstanding Achievement in the Teaching of Chemistry from the Northeastern Section of the ACS (NESACS) in 2005. He received the ACS Volunteer Service Award in 2007 and the Distinguished Contribution to Chemistry Education Award from IUPAC in 2014. He was named a Fellow of AAAS in 1992, a Fellow of ACS in 2009, and a Fellow of IUPAC in 2014.

Since his retirement in 2005, he has continued work with B.U. International Programs in the development and maintenance of science study-abroad programs in Dresden (Germany), Grenoble (France), and Madrid (Spain).

Dr. Hoffman has been very active at the local, regional, and national levels of ACS. He served as Chair of NESACS in 2002, Chair of CHED in 2005, and is a member of the Board of Directors of the Northeast Region, Inc. He represents NESACS on ACS Council, was a member of SOCED and the Senior Chemists Committee, and is currently on the International Activities Committee. Internationally, he was appointed by the National Academy of Sciences to serve as the U.S. National Representative to the Committee on Chemistry Education of IUPAC. He has served as Treasurer of the Malta Conferences Foundation since its incorporation in 2011 as a 501(c)(3) charitable organization.

We are happy to announce that Associate Professor Linda Doerrer was recently awarded a $110,000, grant titled “Lanthanide-Based Polymerization Catalysts with Water Resistant Ligands” from The American Chemical Society. The funding, which will last for 2 Years, will help Professor Doerrer explore a family of O-donor ligands, both aryloxide and alkoxide, that are heavily fluorinated in order to further the development of more water-tolerant catalysts, which would be a boon to many industrial polymerization reactions. 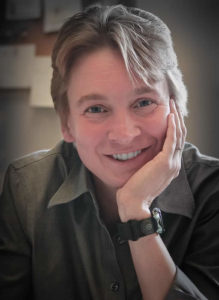 Congratulations to Dr. Doerrer for this exciting Award! 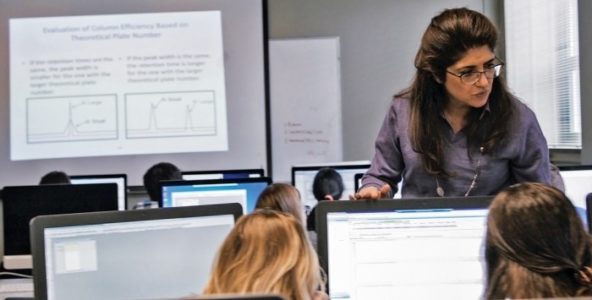 Virtual machines, digital badges, and trips to the museum enrich the undergraduate lab experience.
When it comes to developing fresh educational approaches, college and university professors focus on the classroom and often neglect the laboratory. But, at the ACS national meeting, held earlier this month in San Francisco, attendees heard from professors who are working to improve the undergraduate laboratory experience.
Professor Rosina M. Georgiadis, along with Norman C. Lee and the staff at the Boston University Chemical Instrumentation Center, partnered with Agilent Technologies to use virtual machines in her classes to end the "round robin" student rotation approach to lab courses.  To find out more read the article here in C&EN by Celia Henry Arnaud titled New approaches to undergraduate lab classes: Virtual Machines, digital badges and trips to the museum enrich undergraduate lab experience.

In conjunction with the 250th National Meeting of the American Chemical Society (ACS) BU’s Chemistry department hosted an Alumni Reception at the beautiful Seaport Hotel.

The reception was a tremendous success attracting over 150 alumni, faculty, students and guests. Ann Cudd, the new Dean of the College of Art and Sciences was in attendance. One of the things that impressed greatly Dean Cudd was the interesting and varied career paths alumni have followed after leaving BU. One of the highlights of the event was the attendance of the esteemed Bassaam Shakashiri, member of the 1960 graduating class and past ACS president. His brand of fun science has brought many to the field of Chemistry. By far the best part of the gathering was having so many BU Chemistry graduates re-connecting with other alums, faculty, students and staff. BU’s Chemistry Department has produced some amazing graduates and it’s always great to create opportunities like this for them to stay connected.

Chemistry Chair Lawrence Ziegler surprised the guests by announcing the appointment Dr. Malika Jeffries-EL. Dr. Jeffries-EL will come to BU from Iowa State University where she is an Associate Professor of Chemistry. Her research focuses on the development of organic semiconductors–materials that combine the processing properties of polymers with the electronic properties of semiconductors. She will be an excellent addition to the Departments’ faculty and we are excited for her to join the Chemistry Faculty in January 2016.

Over two dozen of our undergraduate and graduate students presenting either talks or posters at the ACS National Meeting.  If you’d like to check out a list of the students and the projects they presented you can find them here. 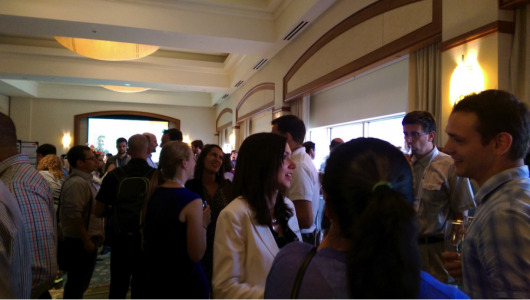 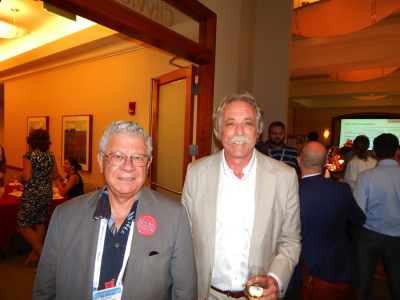 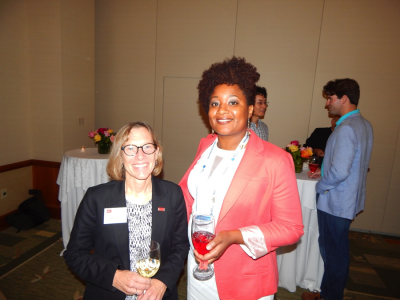 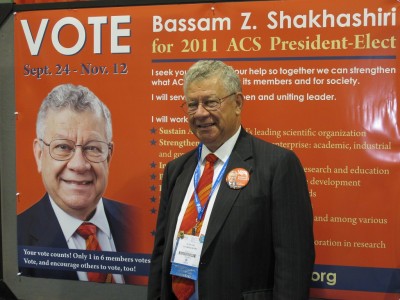 Bassam Z. Shakhashiri, Professor of Chemistry and the William T. Evjue Distinguished Chair for the Wisconsin Idea at the University of Wisconsin-Madison, was elected 2011 ACS President-Elect. He will serve as ACS President in 2012 and Immediate Past President in 2013.   The ACS currently has more than 161,000 members. It is the world's largest scientific society and one of the leading sources of authoritative scientific information. 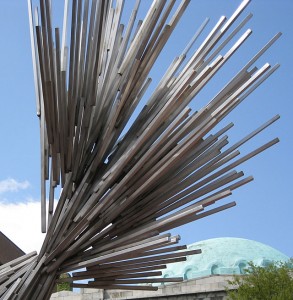 The Chemistry Department invites alumni, faculty, and students to a reception during the Fall 2010 National Meeting & Exposition of the American Chemical Society in Boston, MA. Join us for an evening of light appetizers, drinks, and good conversation and a chance to catch up with friends at the Westin Waterfront Hotel beside the Boston Convention Center.

To attend, please register at the BU Alumni Website before August 16th.

The Westin Boston Waterfront is beside the Boston Convention Center and a short walk from the World Trade Center Stop on the MBTA Silver Line.