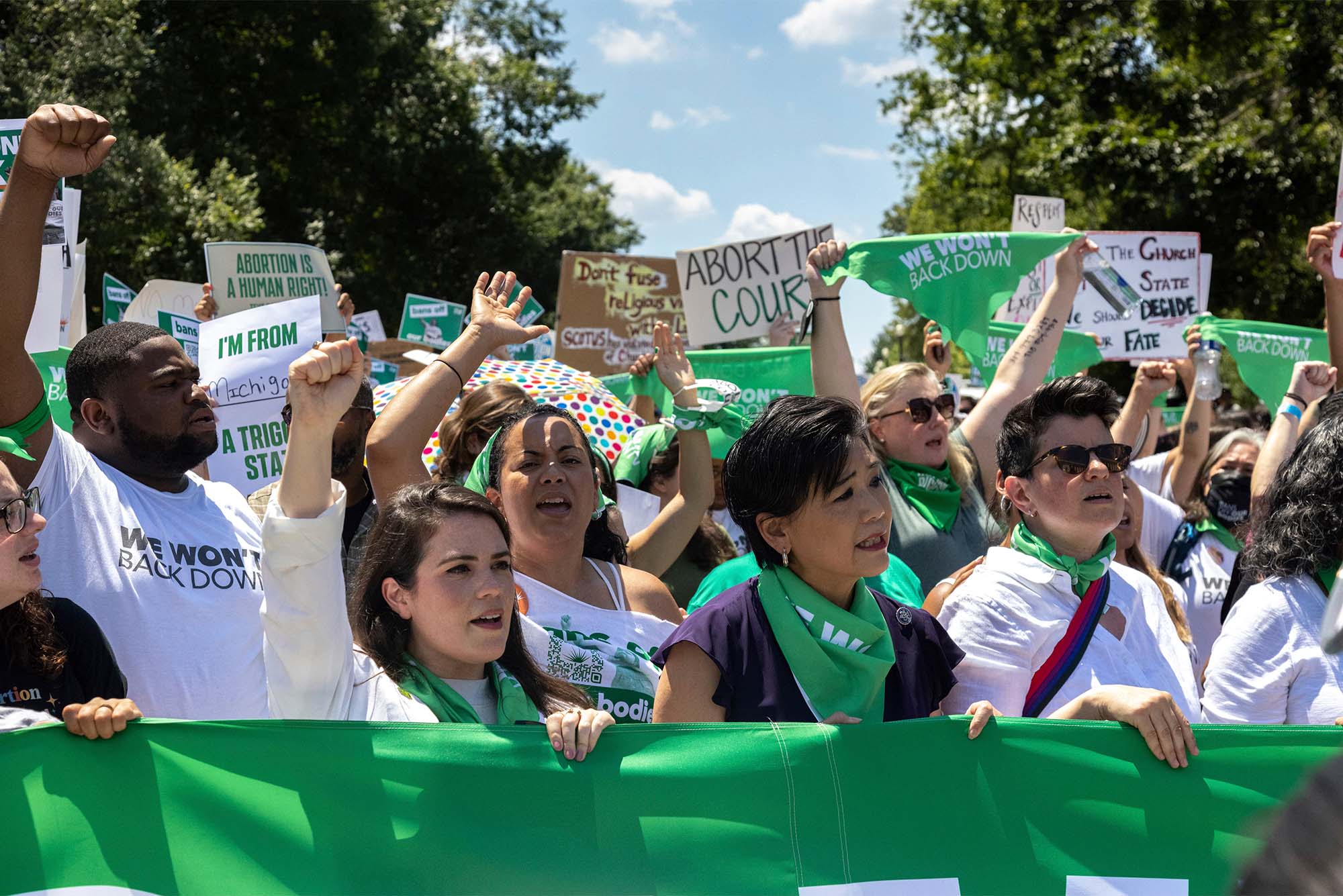 The Supreme Court’s decision in Dobbs v. Jackson Women’s Health Organization, which overturned Roe v. Wade and 50 years of federal protection for abortion rights, has sparked protests across the country. The Planned Parenthood Action Fund and other reproductive health organizations and advocates have been active in mobilizing a response to the decision. Photo by Bryan Olin Dozier/NurPhoto via AP

The Battle for Reproductive Rights

The Supreme Court’s historic June 2022 ruling in Dobbs v. Jackson Women’s Health Organization overturned 50 years of legal precedent, eliminating the federal protection of abortion rights guaranteed by the court’s 1973 decision in Roe v. Wade. The 6-3 decision in Dobbs was a culminating moment in a decades-long antiabortion campaign and a major setback for abortion rights advocates.

It was also a moment that Shwetika Baijal has been preparing for for years.

Although the May 2022 leak of the court’s draft decision came as a surprise, Baijal (CGS’07, UNI’09) and her colleagues at the Planned Parenthood Action Fund had expected such a ruling since Justice Ruth Bader Ginsburg’s death in 2020.

As a candidate, Donald Trump had promised to appoint antiabortion judges; as president, he followed through with three successful Supreme Court nominations, tilting the balance of the court to a 6-3 conservative majority. “Some people say that this has been 50 years of work, since right after Roe passed,” Baijal says of the antiabortion movement’s recent victories. It’s her job, as a senior director of campaigns, to counter those efforts by building support for the protection and expansion of access to a range of health services, including abortion.

In 2022, that’s a daunting task. Even before the Supreme Court had ruled on Dobbs, state legislatures began passing a historic number of laws restricting abortion rights in anticipation of the decision. Yet Baijal remains positive.

“We know that abortion is popular, by the majority, in every single state,” she says. Planned Parenthood research also shows that many of those supporters did not believe that the Supreme Court would ever overturn Roe v. Wade. “It’s been hard for people to imagine, because that’s not what the Supreme Court has done—this is the first time the Supreme Court has gone against precedent to take away rights,” Baijal says. “Every other time, it has been to expand human rights.”

Planned Parenthood Federation of America (PPFA) was founded more than a century ago to provide sexual and reproductive healthcare and education. It now supports more than 600 health centers serving approximately 2.16 million people—making it the largest provider of sexual and reproductive health services in the United States. Health center services include birth control, testing and treatment for sexually transmitted diseases, gender-affirming hormone therapy, and abortion. The Planned Parenthood Action Fund is the advocacy and political arm of PPFA, and plays a vital role as an advocate for reproductive rights.

Working from Planned Parenthood’s Washington, D.C., headquarters, Baijal’s responsibilities include work on behalf of Planned Parenthood advocacy and political organizations, such as supporting or opposing proposed legislation and ballot measures and candidates during elections. All of that unfolds at national, state, and local levels.

Mobilizing people who may now feel a renewed sense of urgency in protecting their rights is at the core of Baijal’s strategy heading into the 2022 midterm elections. In the aftermath of the leaked draft decision, Planned Parenthood organizations and partners coordinated protests. She joined about 15,000 protesters in Chicago and estimates that one million people participated across the country. More engagement, she hopes, will translate to more votes, and since the repeal of Roe v. Wade means that important decisions about reproductive health will now be made by state legislatures and governors across the country, those votes will be important.

“The most polarizing voices have become loudest,” Baijal says of the political climate she’s navigating. “But if you step back away from that, you realize that we just need to talk to the people who are not those loudest voices, [in order] to make change happen.”

Baijal arrived at the College of General Studies in 2005, intent on becoming an accountant. “My first meeting with my freshman advisor—she looked at me after hearing my story and went, ‘You’re not going to be an accountant,’” she says. “She saw leadership potential in me that I didn’t see myself.”

She didn’t immediately abandon the idea of working in finance. But a summer internship at Ischus Capital Management in New York City gave her a glimpse into the subprime mortgage business that was about to crash the economy. “The summer of 2007 really changed me,” she says. “I knew what was going to happen, and I couldn’t understand how nobody else saw it. [Then] within a year of that internship, I saw the world collapse.”

Disillusioned, but also inspired by the momentum building for Senator Barack Obama’s run for president, Baijal began thinking about politics and policy. As the Great Recession eased, she received a fellowship to study how to run political campaigns. A series of campaign and consulting gigs followed. “I’ve done everything from running large-scale protests to helping with grassroots and grasstops coalition-building,” she says.

Baijal joined the presidential campaign of Senator Cory Booker (D-N.J.) in 2019, serving as his operations and special projects director in New Hampshire. When he withdrew from the race, she moved into issue-based work. “I had started to think about what would be my ideal job, and it was working for an issue advocacy organization where sexual and reproductive health access was their main issue,” she says. “And as the campaign ended, I saw that this job was open at Planned Parenthood.”

With the support of Booker campaign leaders, including a personal recommendation from the senator, Baijal got the job and started work in February 2020. “I had no inkling, not only about the pandemic, but also the fact that the Supreme Court was going to be drastically reshaped after RBG’s [Ruth Bader Ginsberg’s] passing.”

Despite the Supreme Court’s shift to the right, Baijal cites a series of critical victories in 2020. The most obvious was Joe Biden’s win in the presidential election, but perhaps even more critical for abortion rights were the Senate races that Planned Parenthood advocacy and political organizations targeted. Republican control of the White House and Senate at this time may have led to a national ban on abortions after six weeks after pregnancy, a proposal that abortion opponents are pushing in advance of the 2022 midterms. Baijal was involved in campaigns targeting 10 key states, including Georgia, where Democrats Jon Ossoff and Raphael Warnock won run-off elections that gave Democrats control of the Senate.

Getting experience in both politics and policy was a calculated move—if you want to understand one, you have to understand the other, Baijal says. “There are plenty of good ideas waiting to be enacted, but they won’t be until there’s political will, and until you understand how political will is shaped or created or transformed, you’ll just keep coming up with ideas that nobody wants.”

Those experiences now help her navigate an increasingly turbulent political and legal landscape.

And lately, what’s been happening is a historic shift in reproductive health access. After Brett Kavanaugh joined the court in 2018 and Amy Coney Barrett in 2020, states began passing abortion bans in anticipation of the Supreme Court removing federal protection of abortion rights. In 2021, 19 states restricted abortion rights, and 12 did so in 2022 in advance of the Supreme Court’s decision. Some of the new laws not only criminalize providing or receiving an abortion, but also helping someone obtain one.

Following enactment of this latest wave of legislation, residents of some states will be all but cut off from abortion access. In Louisiana, for example, the average one-way drive to an abortion clinic was 37 miles. As one of the states with a “trigger law” [a law written to go into effect when a specific event or condition occurs] in place, abortion immediately became illegal once the Supreme Court overturned Roe v. Wade. With most southern states having passed or considering new restrictions, the nearest clinic could soon be in Illinois, more than 600 miles away.

“Since 2010, Republicans have focused on state legislatures because that is where a lot of power sits when it comes to sexual reproductive health and access,” Baijal says. She estimates that close to 40 million people of reproductive age will lose abortion access in their home states as post-Roe restrictions are put in place.

Now that the Supreme Court has issued its decision on Dobbs, she says, “we expect that there will be a wave of emotion, a wave of shock, and a wave of anger. And there’s going to be a period where things get darker before they get better.” She wants Planned Parenthood organizations to help lead that rebound.

Even before the draft decision was leaked, Baijal was focused on mobilizing supporters. “There is a believability gap between those people who support [reproductive rights] and the people who knew that Roe was going to fall. Our work is to reduce that gap and then to make sure that people are moving into a place of action—making sure that we’re tapping them as donors, as volunteers, as leaders. Maybe they’ll be motivated to run for office.”

Despite the Supreme Court’s decision, Baijal remains hopeful that this historic moment could renew a nationwide call for protecting reproductive rights. “I do think that there is going to be a period of shock in the country. People will realize what this means for their loved ones. And I have hope that between now and November, when the midterms come, we will see that impact on the elections. I’m certainly working to make sure that happens.

“It’s been really challenging to experience this level of chaos. But I’m also very aware that I have a privilege in that I get to do something about it.”

The Battle for Reproductive Rights

There is 1 comment on The Battle for Reproductive Rights