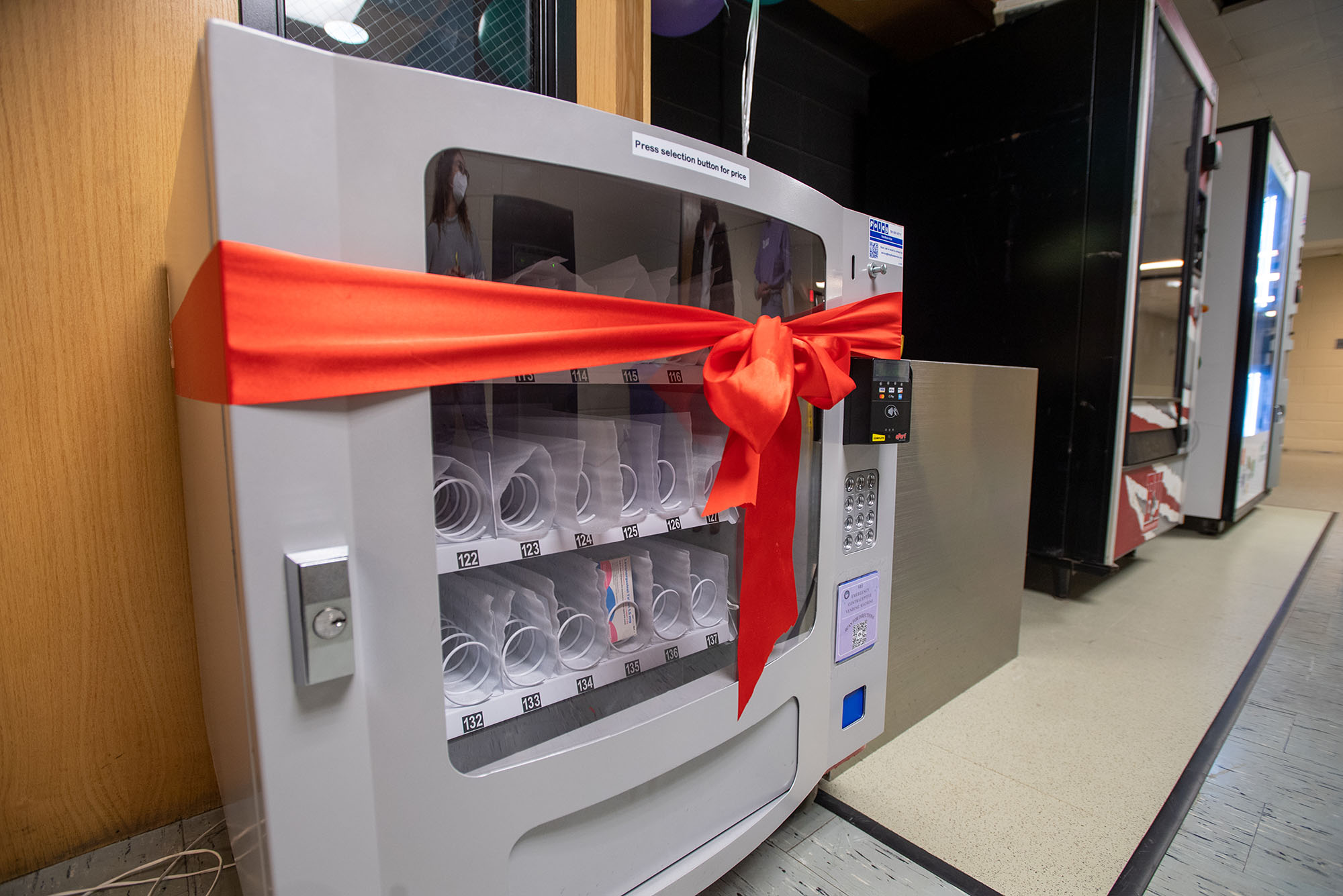 If the early days after the Supreme Court overturned Roe v. Wade are any indication, contraception around the country could be harder to come by, and contraception vending machines like this one in BU’s George Sherman Union could quickly run out of supplies. Photo by Cydney Scott

Student Health Services will continue to provide referrals to abortion providers, but contraception may be harder to find

The landscape of access to abortion, contraception, and reproductive healthcare will be different for students when they return to Boston University in August, following the decision by the US Supreme Court on June 24 to overturn Roe v. Wade.

Contraception and the morning-after pill might be harder to find at stores or online. Abortion is already being limited or banned in some students’ home states, but it will remain protected in the commonwealth of Massachusetts. And University leaders are sending a clear message that when it comes to issues of reproductive healthcare, BU will continue to be there for students.

“This does not change what we provide,” says Judy Platt, BU’s chief health officer and executive director of Student Health Services (SHS). “Students need to know, even if when they return home they may not have the same access to services, there’s a commitment here on behalf of Student Health Services to make sure that we can provide the services and provide referrals as needed.”

SHS does not offer abortion services, but can give referrals to nearby physicians or providers. On campus, students can purchase the contraception pill Plan B for $7.25 from a vending machine in the George Sherman Union basement. The market price for Plan B is typically $50, but is offered for less thanks to a student club partnership with SHS.

The Planned Parenthood on Commonwealth Avenue at the tip of BU’s West Campus is already seeing change. Patients traveling from Texas have received care there, and officials say they could see an influx of patients from states with restrictions on abortion.

“Massachusetts could see a surge of patients coming to us,” says Nate Horwitz-Willis, Planned Parenthood League of Massachusetts executive vice president, “putting a strain on our existing healthcare services.”

Horwitz-Willis says Planned Parenthood locations have been expanding their capacity for in-clinic and telehealth services, especially for medication abortion, which does not require surgery and can be done at home. And $2 million in funding has been written into the proposed state budget for improving infrastructure and security at reproductive health facilities across the state.

Massachusetts could see a surge of patients coming to us, putting a strain on our existing healthcare services.

Rebecca Hart Holder, director of Reproductive Equity Now, urges women with appointments in Massachusetts to keep them, but says the burden of the Supreme Court’s decision will be felt by those with the least resources. “They’re going to take on the financial and emotional burden of seeking care in another state or seek abortion outside of the healthcare system,” she says. “Our doors are open and they will remain open to anyone who comes to Massachusetts.”

Holder also says she is “very concerned” about Missouri and Texas legislative actions that would “try to target our abortion providers here in Massachusetts who are providing legal care.”

In a move applauded by advocates and other politicians, Massachusetts Governor Charlie Baker issued an executive order on June 24 prohibiting state agencies from assisting an investigation by another state into a person receiving, or an entity delivering, reproductive health services that are legal in Massachusetts. The following Monday, June 27, the Massachusetts House proposed a bill that would shield providers of reproductive and gender-affirming care as well as their patients from out-of-state legal action.

Patients coming to Massachusetts for reproductive services should not expect long lines or a waiting period, Horwitz-Willis says, and can rest assured they will receive the best healthcare possible. He also commended Baker’s executive order, but acknowledged the reality that physicians are already being targeted, “both physically and psychologically.

The Planned Parenthood Commonwealth Avenue location has a yellow line painted on the sidewalk, marking the closest distance protestors can demonstrate. “At Planned Parenthood, we have one of the best security teams, so we have no issue about that at all,” he says.

Horwitz-Willis reassures students they would be welcomed for whatever healthcare needs they have. “There’s a lot of fear coming from people from out of state,” he says. “We know that college students are coming and they are concerned.”

There is 1 comment on How the End of Roe v. Wade Will Be Felt across BU Campus

How the End of Roe v. Wade Will Be Felt across BU Campus
1
share this