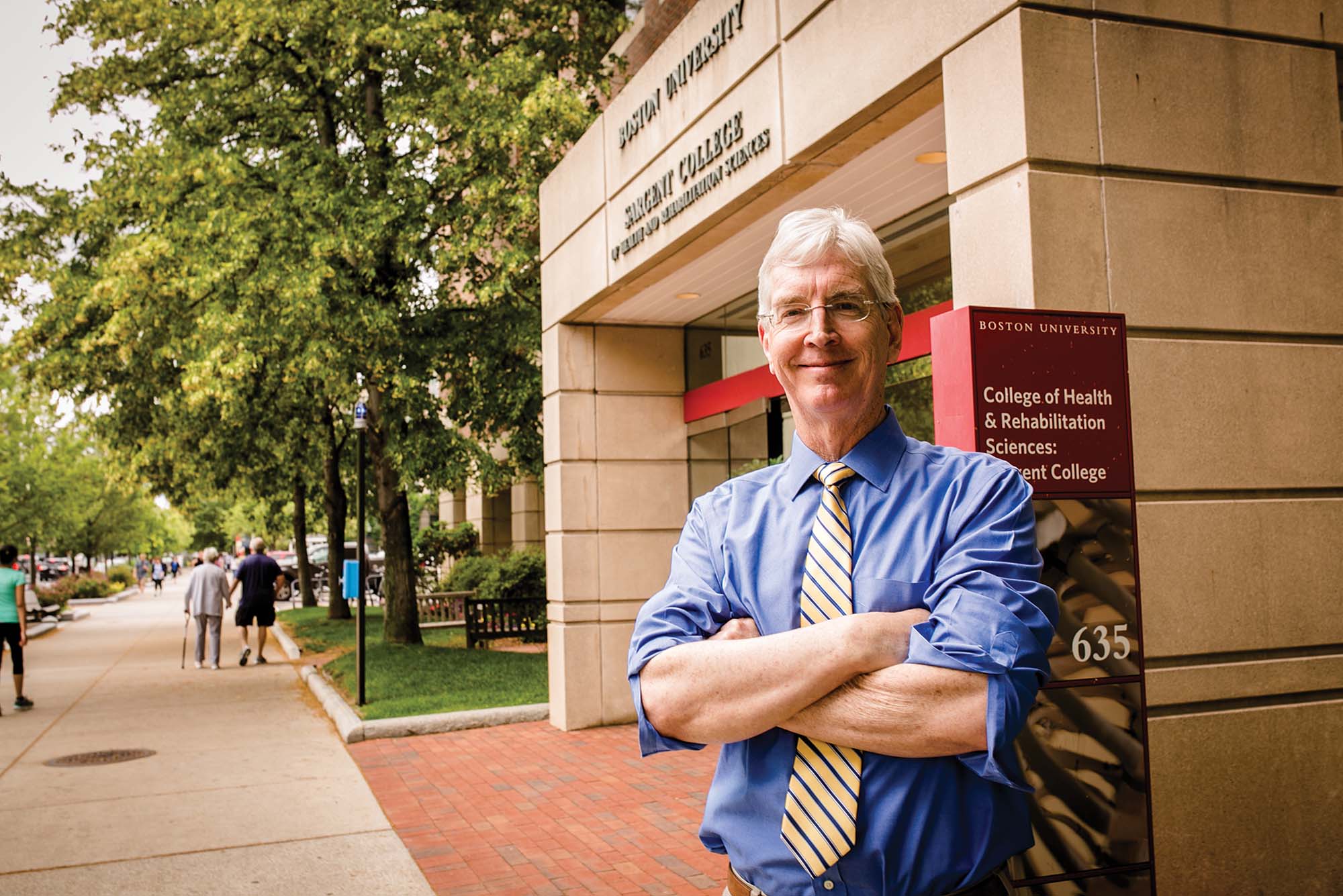 Christopher Moore, who has been dean of Sargent College of Health & Rehabilitation Sciences since 2014, will step down at the end of the academic year to return to the Pacific Northwest to be closer to family. “I’m hoping to be in and on the water enough to develop gills,” he says. Photo by Dan Aguirre

Credited with raising the college’s national profile, he plans to return to the Pacific Northwest

Since he became dean of BU’s Sargent College of Health & Rehabilitation Sciences in 2014, Christopher Moore has presided over the school’s continued climb into the upper echelon of colleges and universities that train health professionals—no easy feat, to be sure. Eventually, though, the biggest challenge of Moore’s tenure at BU, he says, was being apart from four generations of his family who live in the Pacific Northwest.

Moore recently announced that following the completion of the 2022-2023 academic year, he will step down as dean and retire from the University, and join his many relatives—including four grandchildren and his 95-year-old mother—in Washington state.

“I love Sargent, and I love working with such an extraordinary team, but it’s excruciating to keep trying to explain—fruitlessly—to a four-year-old why we can’t go camping this weekend,” Moore explains, adding that he and his wife, Margaret, are building a house on the banks of a mountain lake outside Seattle.

“I’m hoping to be in and on the water enough to develop gills,” he says.

Moore has continued the success achieved under his predecessor, Gloria Waters, who was dean from 2005 to 2013 and is now BU’s vice president and associate provost for research. Under Moore’s leadership, Sargent grew to more than 1,000 undergraduate and nearly 800 graduate students. The school’s graduate programs all rank in the top 20 nationally, according to U.S. News & World Report: the occupational therapy program at No. 1, the speech-language pathology program at No. 10, and the physical therapy program at No. 20.

“Throughout his eight years at BU, Dean Moore has placed a high priority on supporting research and faculty scholarship and in providing a caliber of clinical experience that enables Sargent students to grow and thrive in their chosen fields,” Jean Morrison, University provost and chief academic officer, wrote in a letter to the University community announcing Moore’s retirement, pointing out the high percentage of students who each year pass their certification exams and land careers in rehabilitation and the health sciences. “Dean Moore’s focus on excellence and his approachability as a leader have been a vital part of that, and we thank him for his exceptional service.”

Moore says he is proud of many things during his time as dean: new faculty members added during his tenure (there are now 79 full-time and 31 part-time faculty); a “superlative administrative team”; the school’s many alumni, supporters, and friends; highly ranked clinical programs and professional graduate programs; the renovation of many classroom, laboratory, and research facilities; and federally funded research expenditures that now exceed $700,000 annually per tenure-track faculty member. “That is a lot of research activity,” he adds. “Our contributions to human health just continue to grow.”

In a letter to Sargent faculty and staff, Moore wrote that he couldn’t have foreseen the opportunities and challenges ahead when he joined the college in 2014, “and certainly not the exceptional talent and stamina of the scholars and professionals at the heart of the Sargent community. I am grateful to have shared your passion and dedication, especially over the past two years, which make Sargent such a very special place to work and learn.”

Moore says he is particularly grateful to President Robert A. Brown, who announced his own retirement September 7, and Morrison for entrusting him with the role of dean. “Their support and the support of their teams has driven Sargent to greater achievement every year,” he says.

He also thanks Sargent’s Dean’s Advisory Board, “whose members have provided deep insight, judgment, and perspective on the strategic directions of Sargent College,” he says.

Sargent will launch a national search to find the school’s next dean, Morrison wrote, a process that begins with the formation of an advisory committee, which will consist of three Sargent faculty members elected by their colleagues, two faculty elected by the Faculty Council from other schools, and as many as three faculty chosen by the provost.

Moore’s wife, Margaret, has been working remotely from Washington state since the outset of the pandemic and has been designing and overseeing the construction of the couple’s retirement home there. Moore says he looks forward to joining her and to helping with its completion. Besides camping with his four grandchildren, he says, he’s looking forward to spending plenty of uninterrupted time with the couple’s fifth grandchild—who is due in the spring.

“My research area is physiologic development of speech production, especially during the first year of life, so it will be fun to get ‘back into the lab’ with this little one,” Moore says.