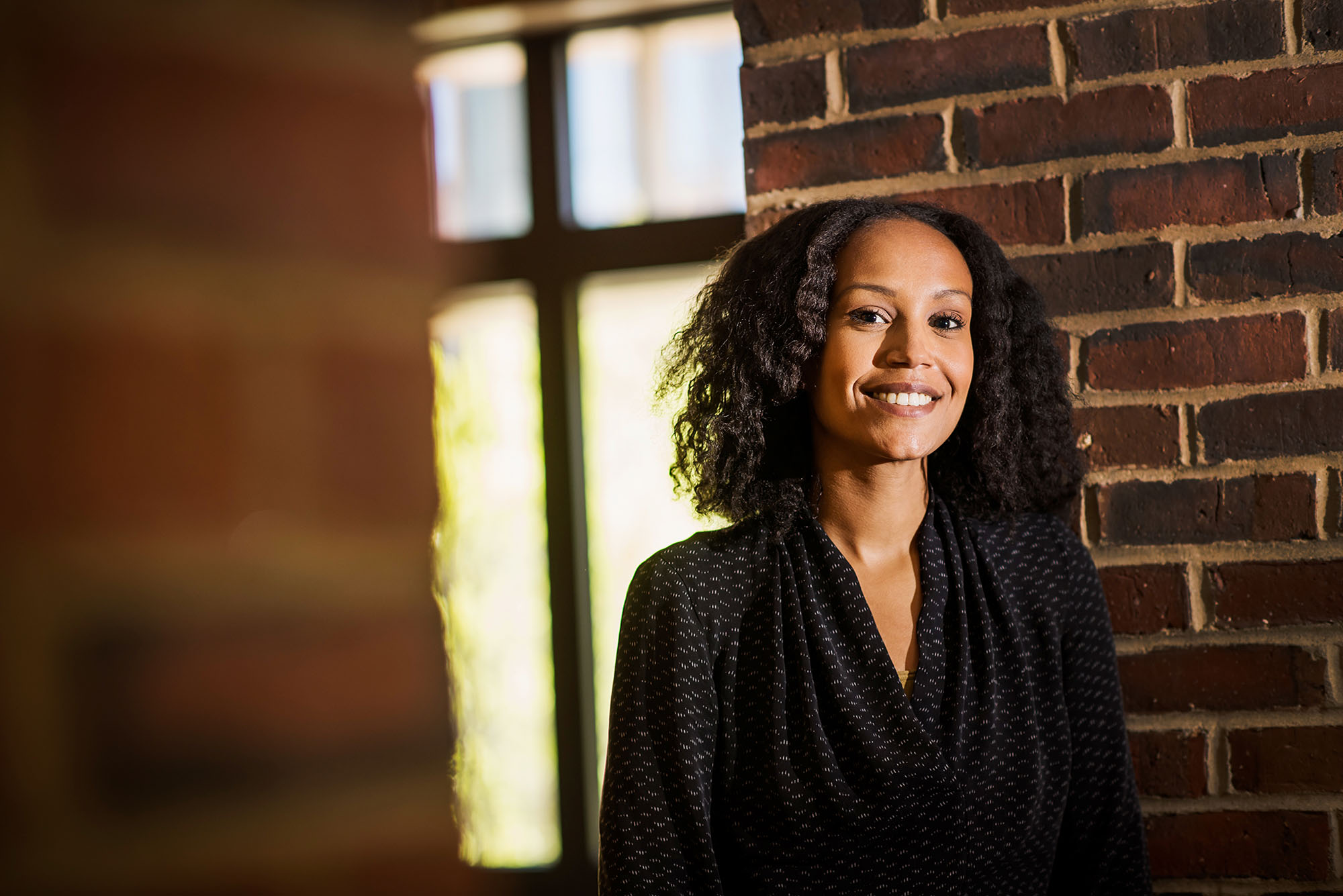 “You are what you eat,” as the old saying goes, is not always so simple. Depending on the food you have on hand, your access to nutrition information, and regional customs and traditions, sometimes you are what you don’t eat.

An example: people who don’t eat enough iron-rich foods—such as leafy greens, seafood, or meat—can develop iron-deficiency anemia, a condition in which their blood produces fewer than normal red blood cells, or hemoglobin. Left untreated, it can lead to fatigue, weakness, shortness of breath, and serious complications during pregnancy. The condition is common in all countries, regardless of wealth, according to the World Health Organization. But Southeast Asia has some of the highest rates of iron-deficiency anemia. In India, more than half of women are anemic.

“Women have a hard time recognizing that they are anemic,” says Hagere Yilma, a College of Health & Rehabilitation Sciences: Sargent College clinical assistant professor in health science and lead researcher for the RANI Project—short for Reduction in Anemia through Normative Innovations—which took place in Odisha, India, from early 2019 to spring 2021. “A lot of the daily lives of women in these areas are characterized by physical labor, like agricultural work and taking care of their families morning and night.” So, at the end of a long, tiresome day, many women don’t think twice about how fatigued they might feel.

Though anyone can develop anemia, it is more common in women who menstruate and women who are pregnant. (“Rani” translates to “woman” in Hindi.) It is typically combated by eating foods high in iron or, if changing a diet isn’t possible, taking iron supplements. Despite the relative ease of treatment and past public health efforts in India to encourage pregnant women to take iron supplements, rates of anemia are still high.

It was like admitting tiredness or fatigue was a luxury or an admission of a personal weakness. We had to help people realize that if they’re feeling fatigue, it might be a medical concern.

“Going to a health center or seeking health advice is not an easy thing to do in Odisha,” Yilma says, since many people live in rural areas, far from community health centers and clinics. The RANI Project, which began at George Washington University and partnered with health organizations in Odisha and New Delhi, had the goal of reducing anemia in the area by 10 percent. To do that, Yilma and the team built a transformative public health intervention to raise awareness of anemia, frequently test women for the disorder, provide them with iron supplements as needed, and change the existing stigma and false beliefs about taking iron supplements.

Yilma and her research colleagues interviewed more than 4,000 women to learn about their daily habits and the prevailing social norms that prevent women from addressing signs of anemia. They went door to door throughout the region to conduct the interviews and gather necessary data for the intervention to work. Their findings were published in the journal BMC Public Health.

Every home had a different story. Many of the women were married, some had children (interviews were occasionally interrupted by toddlers scampering through the room, Yilma recalls), some were in school, and many lived with their mothers-in-law, since it’s common in the region for mothers to live with their sons.

“It was like admitting tiredness or fatigue was a luxury or an admission of a personal weakness,” Yilma says. “We had to help people realize that if they’re feeling fatigue, it might be a medical concern.”

Odisha women also traditionally are the last in their families to eat, a sign of love and respect. “What’s left over is usually not the most iron-rich, limiting their iron intake,” Yilma says. And their diets may not include meat at all—many households are vegetarian for religious reasons.

From their interviews with women, who ranged in age from 15 to 49, researchers learned that many women thought that only pregnant women should take iron supplements, making the idea of taking them less appealing to women who aren’t pregnant. There was also the idea that taking iron pills while pregnant can lead to babies being born larger, which is not the case, Yilma says. She and the team were then poised to change the narrative about iron supplements—and convince the women and their mothers-in-law that the supplements are safe for them and their babies.

“Mothers-in-law are very much involved in household and health decisions,” Yilma says. “We saw that, for the most part, husbands supported whatever was good for their wife, but mothers-in-law took issue with iron supplements. There’s this idea that since [their generation] didn’t need it, why do their daughters-in-law need it, and is it good for their baby?”

Yilma, who is a first-generation Ethiopian American, has been passionate about women’s health since she was a graduate student at George Washington University in Washington, D.C. She focused on RANI while pursuing her PhD, and started teaching at Boston University shortly after graduating in fall 2021. Outside of analyzing and collecting vital data for the RANI Project, her other research has often focused on how social norms—the shared beliefs about what is acceptable in society—shape individual health, and what can be done to change them.

“They are very different countries, but I saw a lot of similar social dynamics from my own family in Ethiopia,” she says. “People want to be healthy, and people want their loved ones to be healthy, but sometimes our interactions with each other are not conducive to our health. It’s a matter of changing those interactions so someone feels supported to change their health.”

After conducting interviews, collecting data, and designing a community-oriented approach to normalize iron supplements in Odisha, the RANI team launched health interventions in more than 138 villages at the end of 2019. The interventions, outlined in the Bulletin of the World Health Organization, consisted of public meetings where women, men, mothers-in-law, and others learned about the effects of anemia and underwent blood tests—a reliable way to check if someone is anemic. About 15 women volunteered during each meeting for a finger prick that would instantly show hemoglobin levels; if the number was low, they likely had an iron deficiency. Each volunteer was then handed a color-coded card, depending on the results of the test—red being a serious deficiency, red-orange and yellow being less severe, and green meaning normal hemoglobin levels. They placed the cards on a large mat, giving them a sense for how prevalent anemia is in the community, and showing them that they are not alone. The volunteers who received red and red-orange cards were given iron supplements to treat the anemia.

These blood drop-shaped cards were given to women during activity sessions to depict their level of anemia, green being the lowest level and red being more severe. After the activity sessions, women were given the cards on the left to continue tracking their anemia at home. Photos courtesy of Hagere Yilma

“Over time, more and more green started to pop up,” indicating hemoglobin levels had returned to normal for many volunteers, Yilma says. “It was a way for women to understand that other women were taking iron supplements, and it is actually resulting in this change in hemoglobin.”

Women were able to watch this shift, all while learning and talking with one another about their health. Each meeting took place once a month for about a year, with each one led by local facilitators to address questions and concerns about taking iron supplements and to chip away at doubts or fears that held women back from seeking care. Some villages began to expand on the prescribed intervention material—one village, Yilma says, began a community-wide bell system to remind women to take their iron supplements.

As the COVID-19 pandemic swept the globe in March 2020, large village meetings halted to keep people safe, and iron supplements became increasingly difficult to get. To keep the interventions going, some RANI Project facilitators received permission from the Odisha government to hold small group meetings in village members’ homes. The facilitators provided face coverings and gloves, and distributed iron supplements for those who needed them.

By the end of 2021, the researchers found that the intervention was successful in reducing the number of women with anemia in Odisha, and women who were not originally part of the project began asking about how to get involved. Odisha public health officials have since adopted the RANI interventions in an effort to keep meetings operating and make iron pills more accessible to those who need them.

“Whether you’re someone who is from a disadvantaged caste or lives far from a health center, we have evidence that shifting social factors can motivate people in the face of barriers,” Yilma says. She is working with Sargent students to continue going through the data collected by the RANI Project researchers and delve more into how communication and social norms shifted behavior in Odisha.

“How we communicate with others is very important, especially in disenfranchised groups,” she says. “Sometimes how we interact with each other is all we have.”