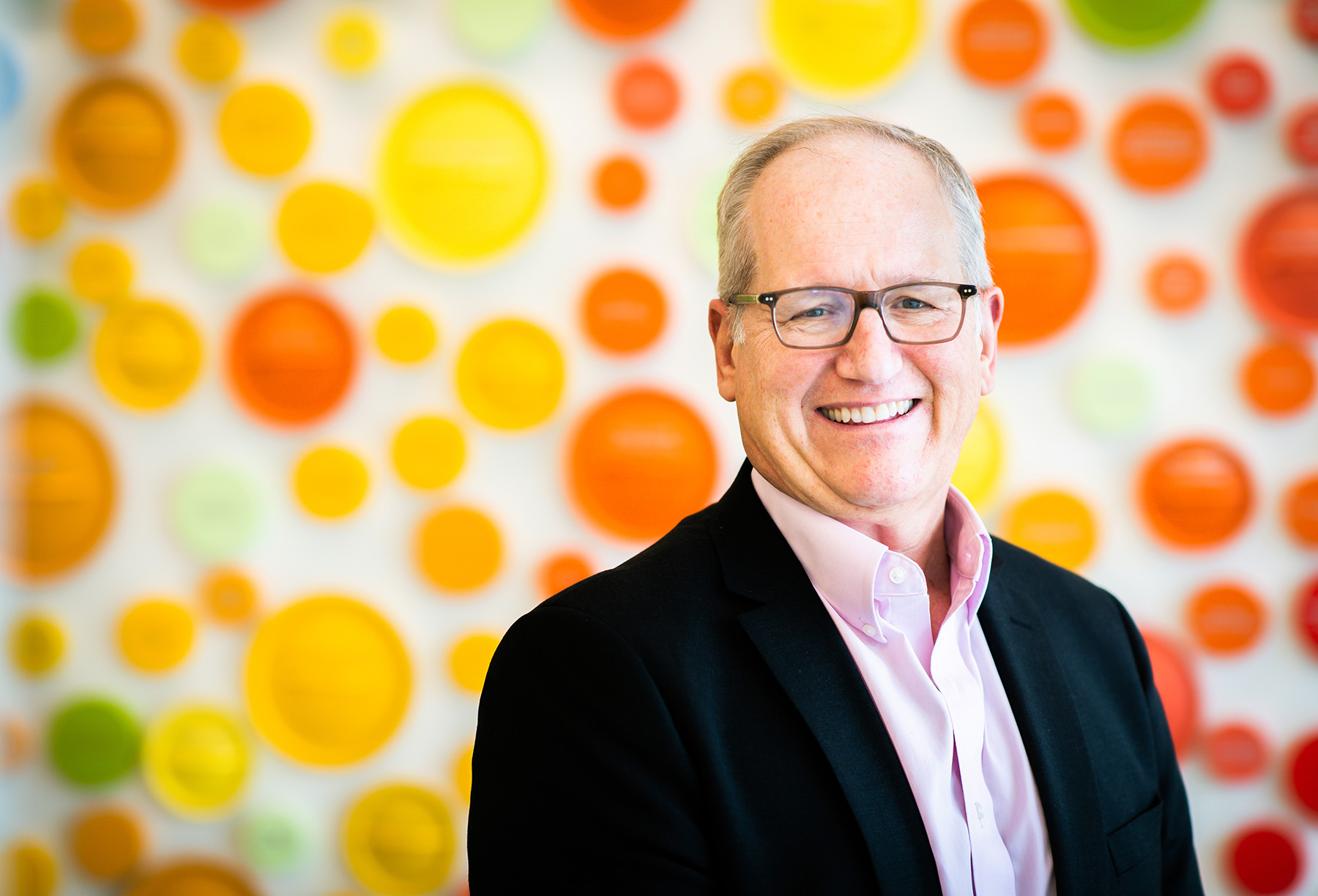 Community Servings CEO David Waters (GRS’89) was named a Barr Foundation Fellow in 2017 in recognition of his leadership and impact within the Greater Boston community.

The AIDS epidemic changed the trajectory of David Waters’ career.

Waters was a gay man in his 20s when the epidemic exploded in the 1980s. At the time he was earning a master’s degree in fiction writing from BU and working on the side managing restaurants. He recalls feeling anxious—“scared of the virus and what it represented in terms of my mortality,” he says. Looking for ways to help, in 1990 he joined the just-launched Boston nonprofit Community Servings as a volunteer. The group was founded by a diverse coalition of AIDS activists, faith groups, and community organizations to deliver hot meals to 30 people living with HIV/AIDS in Dorchester and Roxbury.

Waters used his background working in restaurants, event management, and fundraising to help the group, and at a certain point, he says, he realized the work was much more rewarding than his day job. In 1996 he officially joined Community Servings as its director of development. Since 1999, he has been the organization’s CEO.

Today Community Servings has grown into a statewide program that provides more than 875,000 scratch-made, medically tailored meals a year to more than 4,000 clients who are unable to shop or cook because of a critical illness. About 92 percent of its clients are experiencing poverty and 60 percent identify as Black or Latinx. Research has shown that participation in a medically tailored meals program leads to fewer hospital and nursing home admissions, and less overall medical spending, for those who are ill.

Waters spoke to Bostonia recently about his work and what companies can do to foster inclusivity.

Bostonia: Who opened doors for you in your career?

Waters: Sometimes it was my alumni networks [he also has a bachelor’s in English and a master’s in dramatic literature, both from Middlebury College], but it was often peers in the food industry. There’s a unique relationship between HIV and the restaurant community, in that many of the people who were sick and dying were restaurant employees, and so there was a personal connection for most chefs and restaurateurs in the city to fight HIV. In some ways, it was similar to what we’re living through now with COVID.

Bostonia: As a gay man, did you experience discrimination in the workplace?

Waters: Not in the workplace; I was certainly luckier than most. But I certainly experienced stigma and bullying in schools as a child. Civil rights for the LGBT community are wildly different now than it was when I was coming out in 1982.

But on top of that, you had what appeared to be a death sentence around HIV tied to intimacy. So my generation had a lot of trauma around that, and I think that only makes me more aware and respectful of other communities that have experienced even more stigma or more trauma than I did, as a white middle-class man who has some privilege.

Bostonia: Can you talk about Community Servings’ decision to pivot from serving just those with HIV/AIDS to including those living with other critical or chronic illnesses?

Waters: When we first started feeding people, there were no drugs available, and people living with AIDS were faced with a condition called AIDS wasting syndrome, which is essentially malnutrition. Your body is attacking its lean body mass trying to kill off the virus. And if you loved somebody with HIV or AIDS, and you were desperately waiting for a cure, your only solution was to feed them.

So programs like ours grew around the country with the dawn of new HIV medicines. The landscape changed in the mid-90s, such that some people didn’t need our services or needed them for a shorter term. And so it opened up the opportunity to offer our services to a wider audience because we naively thought we were feeding people with HIV, and someone else fed people with breast cancer, and somebody else fed people with diabetes.

And then we realized that in America, we’ve made a commitment to feed children through child nutrition programs and feed the elderly through senior nutrition programs, but feeding the sick has never been a priority. And yet, if you’re too sick to shop and cook for yourself or your children, or you have a very complicated diet and you don’t understand how to control potassium, glucose, and phosphorus, as most of us don’t, we discovered how scared, isolated, and hungry you could be. So we expanded our mission to feed people with any illness, and developed, in partnership with others, this concept of what we call “medically tailored meals,” where we can customize your diet, much like a prescription, to feed and provide you with the daily nutrition you need that fits with multiple illnesses, medications, side effects, and cultural issues.

And then we went on to do the research to prove the cost savings, such that we are now oftentimes paid by healthcare [organizations] to feed their sickest patients.

“My generation had a lot of trauma around [AIDS], and I think that only makes me more aware and respectful of other communities that have experienced even more stigma or more trauma than I did, as a white middle-class man who has some privilege,” Waters says.

Bostonia: You’ve said that when you became CEO of Community Cares, you needed to get up to speed on equity and working in diverse communities. Can you talk about this?

I came into Community Servings as the HIV epidemic was moving into communities of color and IV drug users, and quickly realized it didn’t matter. It was an equally tragic occurrence whatever your life situation. And having now worked in the field for a long time, I’m very conscious of the history of race in America and in Boston, and also how the food industry is traditionally a low-wage industry. Community Servings is in the business of feeding the sick, who are often living in poverty. And so it’s important to us that we not keep our own employees in poverty while they’re caring for people in poverty. Wage income equity is something that is really important to me.

Bostonia: Why is doing diversity/inclusion work so important to you?

Well, it starts on a very selfish level. I probably could have gone into a field where everyone had the same life experience that I did and had walked the same path, as a middle-class white man. But how boring would that be?

To me, some of the most fun work I do is when I get to work with people who have different life experiences than I do. And you know, there are obvious ones, based on gender, education, race, but also more nuanced ones. I work with a number of people who were previously incarcerated or who have struggled and overcome addiction issues, grew up speaking a different language, or have had to overcome illiteracy issues.

It probably goes back to trying to be a writer—learning people’s life stories, the challenges they have overcome, and the traumas they have experienced. [These people] are very inspiring to me and are generally the kind of people that I respect and want to be with.

Bostonia: What can people do in their own workplace to make them more inclusive, diverse, and welcoming?

Well, I think it may sound a little trite, but I think it starts with kindness and respect. Unfortunately, in America at this particular period, there is a division—us versus them. Whatever “them” looks like, whether it’s political beliefs, race, education, or whatever.

We’re all just human beings, and we all have different life experiences. It’s exciting to understand the world from someone else’s perspective, and so I think celebrating that diversity and being open to having your own assumptions or unconscious bias challenged is a great learning journey. I think it’s exciting to do the work and also understand that there are people who have experienced significant stigma and trauma, for whatever reason: race, class, education.

I learned that when I started talking to coworkers, particularly African American men. One man said to me, ‘I walk three blocks to work, and never a day goes by that I don’t confront racism.’ There was probably a time in my life when I would have been too optimistic to believe that was true. But now I realize, not only is that true, but the level of trauma and anxiety that puts on a human being. People carry a tremendous burden, and a lot of pain, and the best thing we can do is to welcome them into our community, rather than try and shut them out.