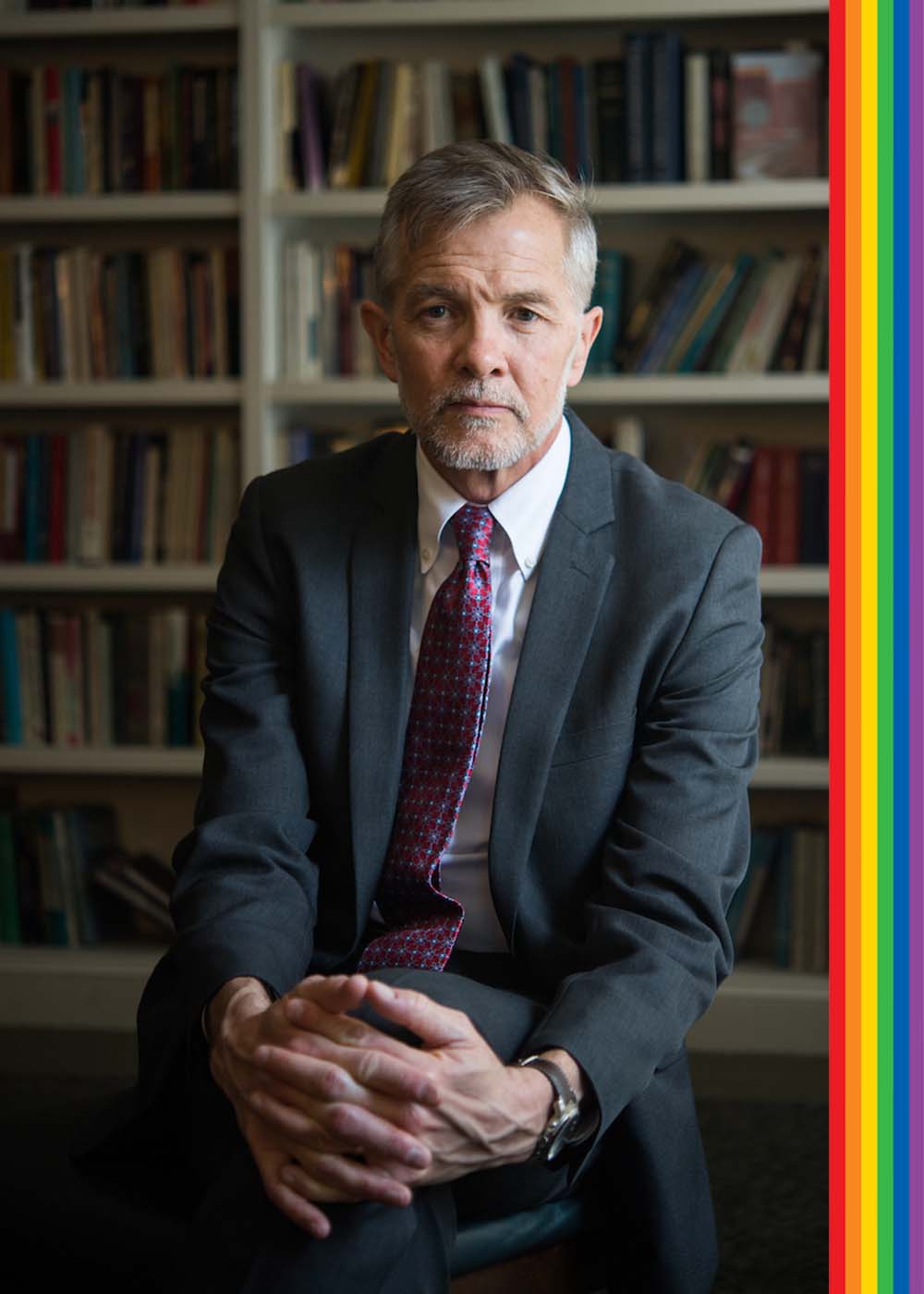 June is Pride Month. To celebrate, BU Today is reprising our My Coming Out Story series, where members of the Boston University community share their stories about coming out and self-acceptance.

We’ll bring you a new narrative each week throughout the month.

This week: David Chard, Wheelock College of Education & Human Development dean, a longtime educator, learning disability researcher, author, and father of three, who came out as gay later in life.

“You never stop coming out”

You know, the interesting thing about coming out stories is that when LGBTQ+ folks spend time together, that’s partly what we talk about. They’re a part of who we are. But the truth is, there is no single coming out story; you come out over and over and over again, which is both cathartic, but also traumatizing. Imagine constantly having to tell the same story to different people who are important to you. It resurfaces the challenges of having a sexual identity that’s different from the heteronormative narrative. I mean, why is it important for people to know that I have a husband? And why is it that I have to do that, but if I were married to a woman as a man of my age and position, it would never even be a discussion? It’s fascinating, intellectually, and emotionally, very challenging.

Many people choose not to come out at all—particularly those of my generation who lived quote, “in the closet,” unquote, for some or all of their lives. For others, we came out in such a way where we at least tried to do the things that society wanted us to do. I think that’s less of a challenge today in some regards. People don’t necessarily feel quite the same pressure to conform that I think those of us born in the ’50s, ’60s, and ’70s did. Then, you know, this big sexual revolution was going on. But those of us who weren’t able to be ourselves felt like we had to be somebody else. And so we tried really hard to go through those motions.

I have three adult children. When you come out [as a parent], you create a wake, if you will, of challenges that people have to deal with their entire lives. My kids have had to learn to adjust to having a gay dad and all that comes with that. They’ve had to create their own coming out narratives for their friends.

So I came out around 1999, 2000. That was an interesting time in our history, with Y2K. There were all kinds of predictions of chaos and collapse that never happened. But at the same time, I think, people were beginning to explore what was going on in their lives. Ellen DeGeneres had a show on television, and she had come out publicly. Rosie O’Donnell had just come out, too. At that point, I had three young kids and had been married to my now ex-wife for 11 years. I knew going into it that there was something off; I’d had a few relationships with men before, but refused to believe I was gay. But after 11 years of marriage, I was deeply unhappy, both professionally and personally. Even though I had these three beautiful children—there was just everything wrong with that, right? That shouldn’t have been the case.

So I told my wife that I thought I was gay. The two of us went through, I don’t know, six months of private reflection, like, what do we do? How do we help our kids and manage the challenges of divorce? At one point we even thought, well, maybe we shouldn’t get divorced; maybe I should just have my gay identity on the side. That’s something some men who have my vintage have done—sometimes successfully, you know; some marriages are companionships that can survive that kind of thing. I’ve never been very good at maintaining relationships like that.

Then I came out to my parents. That was traumatic for them. They were farm and factory workers from the Midwest who were young when they had me. Therapy and those kinds of things didn’t exist in our lives. But I’m one of those of that age who were having children, so that was a consolation prize at least, because they had grandchildren. I sent them a couple of book chapters to read. I think they spent a few months mourning.

I think one of the more interesting things is the coming out that I did over and over. When I came out, we had to tell my children. We had gay and lesbian friends, so it wasn’t extraordinary to them. But my leaving home certainly was. We were living in Austin at the time, and I moved back to Oregon to be a faculty member at the University of Oregon. And that was hard. That was harder than my being gay; that was just, “Dad isn’t going to be around as much.”

Eugene, Oreg., is a very liberal place. Coming out and moving there was relatively easy. But then, after about seven or eight years, I moved back to Texas to become the dean of a new college at Southern Methodist University. I didn’t know much about SMU. I didn’t know how I might be treated there, or whether or not being openly gay [would be dangerous]. I wasn’t going back in the closet for a job.

The president there was a very religious, conservative person. But I also learned a lot of interesting things about Dallas: so, Dallas has about 50,000 LGBTQ+ people who live in it. It has an enormous gay community and the University had a very large gay staff and faculty population. They had drag shows and they had been hosting the gay prom in Dallas for 35 years. So I was actually able to live pretty authentically. And in a kind of heteronormative way; my partner at the time was invited to all of the major dinners and we dressed in suits and ties and did the thing. It was a pretty purple place in a sea of red that Texas can be. Football is also king in Texas. The football coach had heard that I was a gay man and he wanted to meet me; he needed to verify it in a weird sort of way. Then he told all of the big-dollar alumni who supported the football team that I was okay. Like, I was terrified, and suddenly it was all fine. It was remarkable.

Then I came back to Boston to be the president at Wheelock College in 2016 [the school merged with Boston University in 2018], where it seemed like every other person identified as in the LGBTQ+ community. I think BU has its own coming out story, you know. When I was a faculty member at BU here in the ’90s, there was an active effort to try to create a gay-straight alliance, and there was resistance on the part of the administration. And back to that theme of “you never stop coming out”: special education is a small field. Everyone knows everybody, no matter where you’re from. I was straight and married—or at least I thought I was—the first time I was at BU. I have four or five colleagues that were here then who are still here now, and they didn’t know me with this identity. You just start doing it all over again.

So that’s been my life. My kids are happy, and we’ve got great relationships. I’m remarried; my husband is a BC Law alum who works in international tax. He’s an immigrant from Hong Kong and he’s got his own interesting coming out story. We live here in Boston and we have a place in Provincetown. We live a very privileged life; we have a dog who’s probably the luckiest dog in the world. My mom and dad are both gone; they both passed away. My mom didn’t know my husband, but my dad, I think, liked my husband more than he liked me. So that’s good, you know. Those are the kinds of things you hope for in life. That things get better.

I’m almost 60. You try to reach a stage in your life where you have a healthy relationship with your own identity, which is not always easy. We talked earlier about self-acceptance; I’m not sure that’s very easy, either. That might be partially generational. But you know, the queer community, generally, is taught to hate ourselves every day, right? We’re not thought to be “normal.” I don’t know that that ever completely goes away. The marketing culture around the gay community is also very hard—when you’re 30 years old, you’re no longer in the mainstream of the community.

One of the things we love about Provincetown, where we have our second home, is that we took some friends there from Texas last weekend, and their comment to us was that they’d never been somewhere where people seemed so happy. When you identify as an LGBTQ+ person and you go to a place like Provincetown, you become aware that you had no idea what you were missing. You can wear any damn thing you want and nobody stares at you when you hold your partner’s hand. It’s just super refreshing. And people often ask me, “Aren’t we past the need for someplace like Provincetown?” I don’t think we are. Because we come out over and over and over again, right? Maybe there’s a great sci-fi book about a world where you don’t have to do that. But in the biological world we live in, I don’t think we will ever get past having to explain it to people, at some level.

My Coming Out Story: Chantel James

There are 2 comments on My Coming Out Story: David Chard