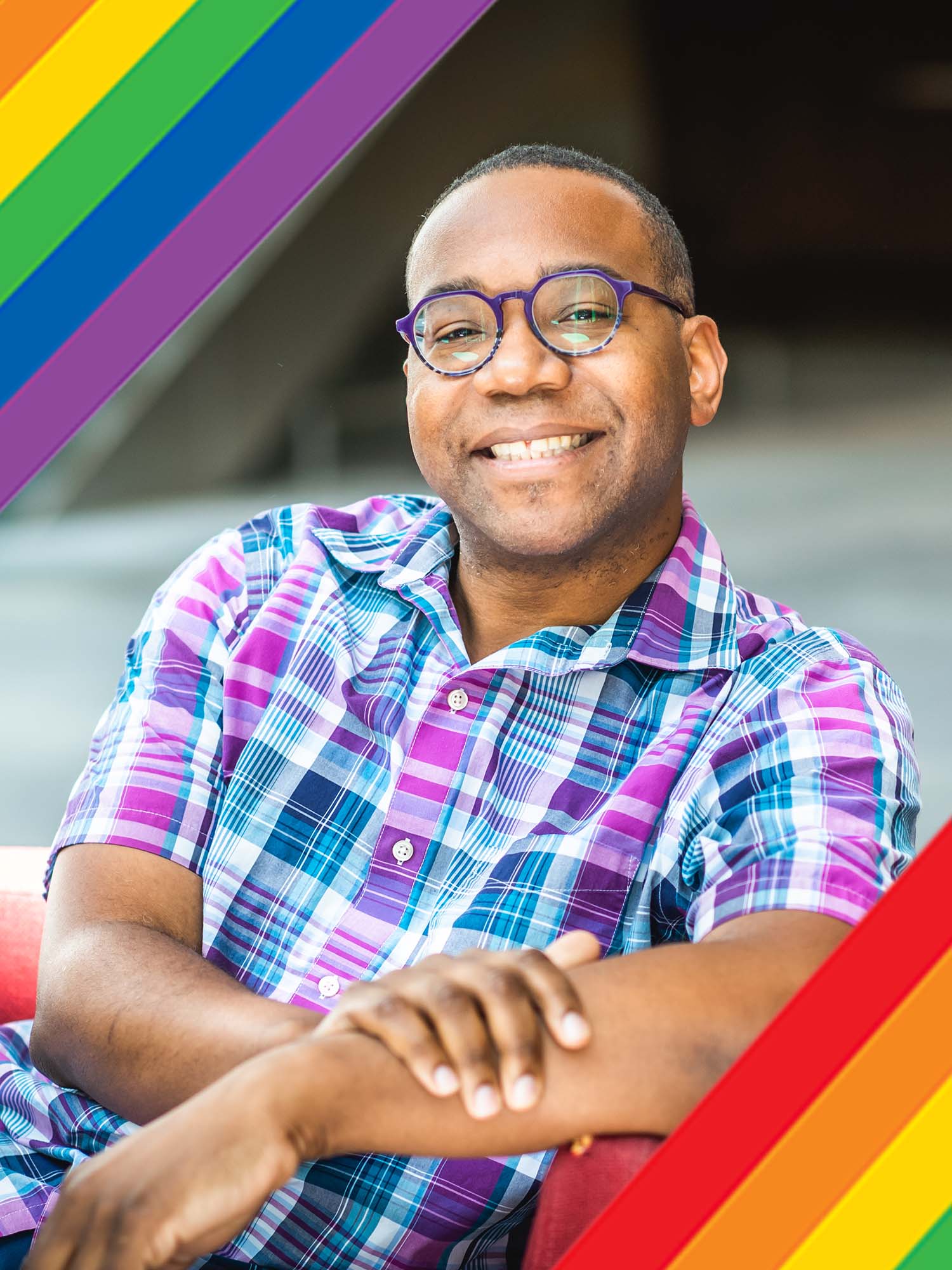 Vincent Stephens, College of Arts & Sciences associate dean for diversity and inclusion, says the emotional component of coming out is very important: “What you’re really doing is saying, ‘I’m going to move through this world with as much honesty and authenticity as is possible.’” Photo by Jackie Ricciardi

My Coming Out Story: Vincent Stephens

June is Pride Month. To celebrate, BU Today is reprising our My Coming Out Story series, where members of the Boston University community share their stories about coming out and self-acceptance.

We’ll bring you a new narrative each week throughout the month.

The final installment: Vincent Stephens, College of Arts & Sciences associate dean for diversity and inclusion, a historian, author, and longtime DEI professional who identifies as gay.

“It’s not your role to make other people comfortable”

I’m 45. I’ll be 46 later this year. I tend to think about things from that lens, of where I am today. I guess the most straightforward thing to say is coming out is very much about these two layers: there’s the coming out to yourself, and understanding who you are. And then there’s the more public-facing part that you share with other people. But I think that the self-acceptance part is important. The reality is, oftentimes when people come out—whether it’s earlier in life or later in life—I don’t necessarily think people are always that surprised. If anything, they’ll often say something to the effect of, “Well, I was waiting for you to own whatever identities you inhabit.” So I think that what I would say, in terms of my own experience, is that I think a lot of it is about emotional clarity.

When you’re in the closet, the power that people have over you is revealing your secret. But when you destigmatize your secret, so to speak, and when you own who you are—whether it’s your desire, your gender presentation, what have you—then that power changes. You know, when I was growing up, there were different words that people used if they thought someone was [queer]. Because of that, when you’re actually gay or lesbian, you’re so afraid that someone’s going to call you that. When you say, “Oh, actually, I am gay, or I am lesbian, or I am bisexual,” or [words to that effect], then you take the sting out, right? I’m not talking about epithets, but you take the sting out of that fear when you own, “Yes, I am gay and that’s an important part of who I am. My emotional orientation and my sexual orientation are important to me just as they are to many people. So, what’s the problem?” Then people don’t know what to say.

So I think that emotional coming out is important, because what you’re really doing is saying, “I’m going to move through this world with as much honesty and authenticity as is possible.” And I think that’s very powerful. And very revelatory, because it allows you to just own the fullness of your human experience; you’re not compartmentalizing and suppressing, you’re not coding things, you’re not using euphemisms and all of that stuff. You’re just owning your place in the world. That’s something that I try to remind people of more broadly [in my work and life]. I think sometimes people are very earnest and apologetic and quick to put their tail between their legs. And so I say to folks, “You know what, the Earth belongs to all of us. So why should you shrink yourself? Why should you diminish your truth to try and make other people ‘comfortable?’” It’s not your role to make other people comfortable. You need to be fully present, and you need to be able to own your own experience. So I think that’s the second layer [of coming out], in terms of public disclosure or whatever we want to call it.

For me, that layer isn’t about, “I need this person to accept me or to like me.” When I show up to a space and make people aware that I identify as a member of the LGBTQ+ community, I expect that people are going to be thoughtful about how they interact with me and how they think about my community or the communities I’m a member of. You’re establishing boundaries. There have been times when I’ve been in spaces where someone was maybe about to say something that I thought was homophobic, and I’ve intervened and said, “I need you to think about what you’re about to say” or “I need you to think about your logic, because you’re assuming that everyone in this space is heterosexual and you can just say whatever.” I’m like, “Mmmm, no.” And even thinking about my own family or friends, there are people who might hesitate to say certain things now. Because they have that moment of clarity, where they say, “Oh, wait a minute, I used to have this generic idea about folks, but I know people in my life that are gay, lesbian, bisexual, transgender, queer, et cetera, so I need to be a little bit more mindful.” I think that that’s also very powerful. And it’s not about censoring someone. It’s about accountability.

I would say I knew pretty young that I was attracted to the same gender. Growing up primarily in the 1980s and early ’90s, I was very observant of what was happening in society. I remember when the HIV and AIDS crisis emerged, and I definitely was mindful of the fact that gay men were the primary victims. And I was aware of the ways that people stigmatized gay men and of all of the prejudicial attitudes. So I stored that in my memory bank. And then I remember when [LGBTQ+ activist organization] Queer Nation organized in the late ’80s and early ’90s, 20/20 or one of those news magazine shows did a whole segment on Queer Nation and it helped me understand the politics of gayness. There’s the social aspect, or cultural aspect, of desire, but there’s also the political and social element of it. Queer Nation was advocating for acceptance, but not in an assimilationist sort of way. (My humanity being affirmed should not depend on me saying, “I just want the same things that a heterosexual person wants.” That’s not really fair.)

I’d also say feminism was important as well. Again, growing up, I definitely observed the double standards in our society, and the way women were often placed below men. This sounds weird, but there was a country singer named K. T. Oslin who was very popular in the late ’80s, early ’90s. I remember seeing a profile of her on TV when I was 15 or 16. She was a single woman, a songwriter, the leader of her band, and I just remember thinking that she was so self-possessed and just brilliant. That was the first moment where I saw these feminist principles in action in a public figure. I thought that was really inspiring, because her songs were also about the female experience. It was really powerful. So all of those things helped inform my sensibilities in terms of gender, sexuality, et cetera.

Then in college—I was an undergraduate at Emerson College in the mid ’90s. That was the first place in my life where people who were openly queer were are accepted, affirmed, celebrated, and included. They weren’t stigmatized. They weren’t treated differently. People weren’t, you know, making comments behind their back. And that was important. I grew up in North Florida, which is very conservative. From both a political and a cultural perspective, it can be very homophobic. And so being in Boston was really, really eye-opening for me, because I was able to say to myself, “You know, you can be who you are.” And who we are is always evolving. It’s not just about, you’re gay and that’s it, it’s finite. At Emerson, I competed on the speech and debate society, and my coach, who was definitely a mentor to me, was gay and lived with his partner. And so I felt like I was in a supportive environment where I felt very much that I could come out and acknowledge my identity and my reality in my own time, in my own way. I think that all of those moments were really helpful. And along the way—through grad school [at Bowling Green State University] and through my professional life and whatever—I’ve been fortunate to work in environments where people are affirming and accepting and loving. It’s great. Being at BU is great.

It’s so easy to talk about “those people.” But when you really have to get specific and think about actual people and their actual identities and experiences, I think it’s much harder to cast a net and group people together. So I think that being able to own your own truth frees you emotionally to live a more authentic life. And I think being able to establish who you are in the various settings you occupy helps people understand what you need, as well as what’s expected. I also think it can spur rich conversations and reflections about why we see the world the way we see it, and where we develop our attitudes and perspectives from.

Oftentimes, I think that there’s a lot of defensiveness [from cis or hetero people]. I think a lot of the folks who are trying to pass, or are successfully passing, [anti-LGBTQ+] bills around the country are afraid. What they’re afraid of is that when they were growing up, there was a certain status that came with being in majority culture. The younger generation is much more open and has pivoted away from some of those bigoted attitudes. And I think you’ve got people who are holding on to that bigotry and trying to reinforce it because they’re afraid and they’re uncomfortable. We should be embarrassed and ashamed that there are adults who are uncomfortable having conversations about human sexuality and desire and different kinds of relationships and families. I think a lot of it is about malice. But some of it’s also about the discomfort of adults who can’t handle the idea that their children might be more open than they are. I think that’s really sad.

But, what that tells me is that in many ways, a lot of the organizing politically and culturally that’s happened over the last 50, 60 years has actually changed society. And I think that there are folks who are afraid of it. I delivered some remarks for this year’s [BU] Lavender Ceremony. In them, I said that people who hold progressive attitudes about things like sexuality and gender identity are actually in the majority. They’re not in the minority; despite the rhetoric, they’re in the majority. And I think that people who have what I call an antisocial, fundamentalist perspective are very threatened by that. Because for them, their way of life is fading away, and things are opening up for other folks.

And so I think we need to really be clear that our culture, the American culture, has changed. It’s become more open, but we’re always going to have to navigate backlash from folks who are afraid of that progress. So we have to just be steadfast and clear about what we’re aiming to achieve as a society. It’s not just about legislation, it’s about really being thoughtful about the spectrum of human experience.

My Coming Out Story: Vincent Stephens

There is 1 comment on My Coming Out Story: Vincent Stephens