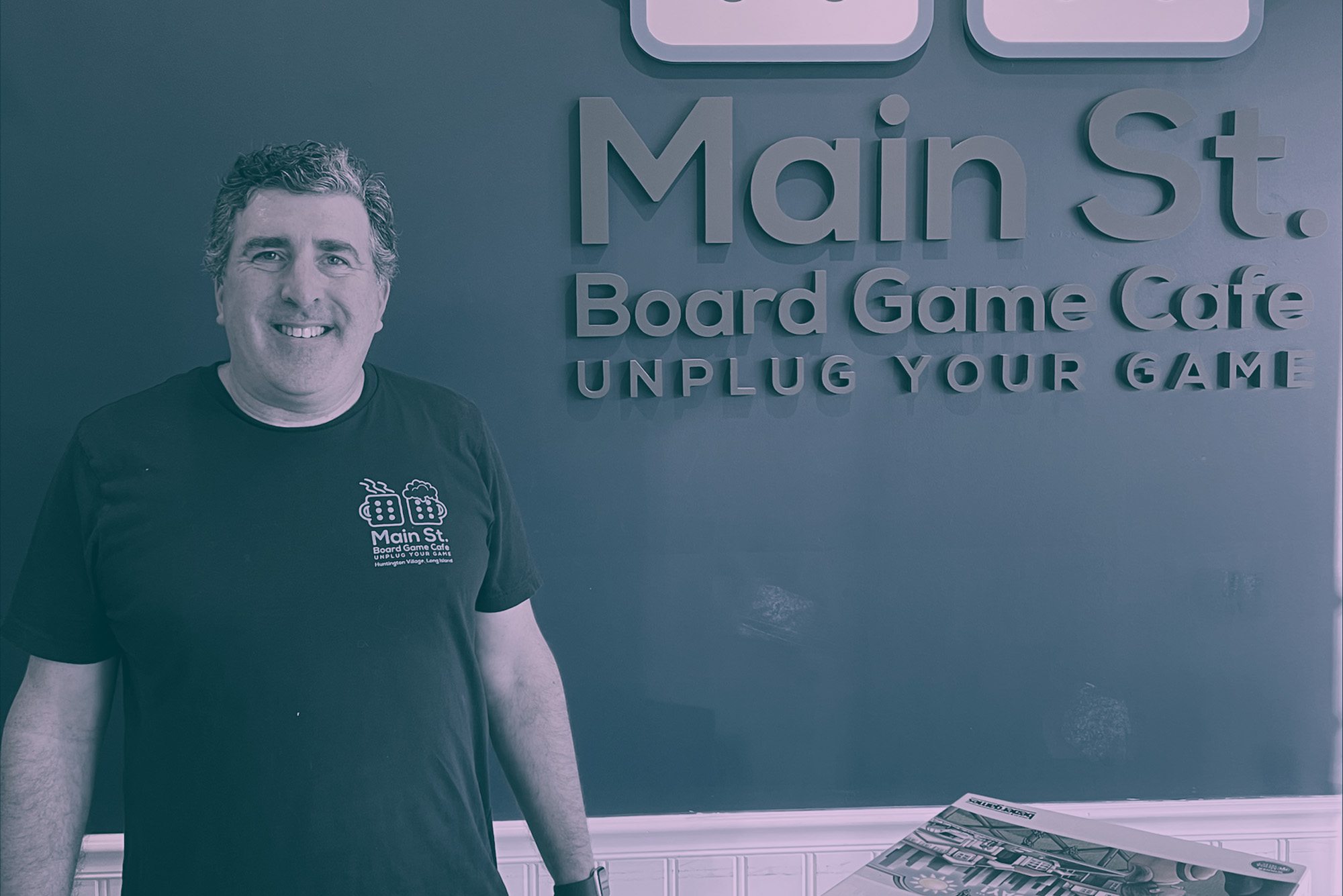 If Neil Goldberg’s life were a board game, it might look like this: he’d have a strong start, with a few great rolls of the dice in a row. He’d encounter a few crossroads, but choose wisely, and pick up valuable assets along the way. At some point, however, he’d draw an unlucky card, and his path would take a sharp left turn. But never one to give up before the game’s over, Goldberg would roll the dice again, bet big, and notch a huge win.

Opening the Main St. Board Game Cafe in 2019 was one of those left turns: “a complete career change” for its founder, Goldberg says. You wouldn’t know that walking into the cozy cafe with its tables and chairs and some 300 board games stacked against the walls.

Goldberg (COM’95) spent most of his life as a sports producer for NY1, a cable TV news program in New York state. “I got there solely from being at Boston University and writing for The Daily Free Press,” the independent student newspaper at BU, he says.

Goldberg spent 20 years at NY1, covering the Super Bowl and the World Series before he was laid off in 2017. He mourned the loss of this part of his life, but saw an opportunity in the misfortune. “It was a chance to do something bold,” he says.

He thought about the dozens of board games he’d collected over the years—games that he and his family played and loved. Goldberg had stumbled upon a board game cafe in the past and thought that the concept could work in his hometown on the north shore of Long Island, N.Y.

Since it opened, hundreds of game enthusiasts have discovered the Main St. Board Game Cafe, spending memorable afternoons slaying dragons, building settlements, and (ironically) battling imaginary pandemics. Customers can sit and play while they drink coffee and eat a brownie, a scoop of ice cream, or a slice of cake (there’s a menu of snacks and desserts), or they can buy a game to take home with them. The cafe even has an after-school Dungeons & Dragons club that draws around 30 kids each week.

Goldberg spoke with Bostonia about the road to Main Street, how he overcame some of the detours along the way, and what’s next for the board game cafe.

Bostonia: Where did you get the idea for the Main St. Board Game Cafe?

Goldberg: I’d always had a little hobby of collecting and playing board games. I’ve always loved them. I played board games with my family a huge amount—it’s sometimes hard to get kids to sit still without a phone and do that. But I collected these games and I had a lot of them, and my family really bonded through playing them. It was always a special time.

So when I was laid off I had to ask myself, do I go back into a control room and potentially get laid off again in another six months? You know, here I am in my 40s, and I’m feeling like this is a time when you can make bold choices. If you don’t make a bold move now, you’re probably not going to have an opportunity to do it again in 10 or 15 years.

I had seen this type of business be very successful and had been to a couple of them. The business was sound, and there wasn’t anything like it where I live on Long Island. So I taught myself how to do it. At first it was a lot of Googling and a lot of calling people and asking them for advice. But what I also found was that a lot of the skills that I had as a sports television producer carried over. It took about a year and a half to get it open, and of course I made some mistakes along the way, but now we’re up and running.

Bostonia: Do any of those mistakes stand out as good learning moments for you?

Goldberg: You know, there’s an expression that everything takes twice as long and costs twice as much—that really was my experience starting a small business. One of the biggest things I learned is that you really have to look at your financials—you can’t guess. You have to go through each step, from construction to employees to stock—everything—nail down exactly how much everything will cost, and budget for it. Because something will inevitably come up that you didn’t expect and that can get you right out of the gate.

Bostonia: What other tips do you have for people interested in opening their own small business?

Anything that you can hire an expert to do for you, do it rather than trying to do it yourself—especially when it comes to the legal side of opening up a business. Getting a business legally open to the public is not for laypeople at all. You have to hire attorneys you trust and who are comfortable navigating the policies in the city or town where you’re opening your business. That’s really important. This isn’t the most scintillating tip, but it’s one that cost me a lot of time and money when I didn’t do it.

When I was first starting out, we had a different location in mind. I hired architects who said they could handle the permits for the town we were building in. But then we lost the space and had to move to a different location—which ultimately was a good thing. I asked the same architects to pull permits in the new town, and it just didn’t work out. You really need an attorney who’s on a first-name basis with the permit inspector in the town your business is in to keep checking in and making sure everything is on track.

Bostonia: You opened right as the COVID-19 pandemic was closing in on the United States. What was that like?

It was stressful. We were completely closed for a period of time. But here’s a story I really love: one of our customers has a son who had made a lot of friends in our “Magic: The Gathering” events. Because of that, our cafe became a really important place for him, and he was worried that we were going to go out of business. So, he called me up one day and said, “Can I give you $5,000? I’ll take $5,000 worth of board games off your retail shelves and drive it over to the hospital and give it away.” And I almost fainted, you know? It was so generous.

I posted on Facebook, explaining what had just happened and thanking the anonymous donor. When I checked my phone again a little while later, I had a message from someone else saying that they wanted to match the $5,000. There were other messages from people who told us how much the cafe meant to them and who were asking to help. So, we set up a donation page, and made several trips to the local hospital with games for kids, nurses, doctors, patients, everyone who was on the front lines.

And in our worst moment, where I think I’m going to lose the business because of this after everything we went through to open, it kept me going. And it kept the business going. It was a beautiful thing. And it kept us afloat until we could get a PPP [Paycheck Protection Program] loan and get our feet back under us.

Bostonia: What’s been your favorite part of this business?

I love teaching people a new game, and I love that moment when you can see that they get it. And then you’ll see four members of a family—who, on a normal day, are all staring at their phones—put their phones down and play a game with each other. They’re talking about the game and maybe trash-talking each other a little bit and having a really good time. Whether it’s a family, or a couple on a date, or a group of friends coming out, they have that great moment in our game community.

My Big Idea: Modest Fashion Gets a Refresh