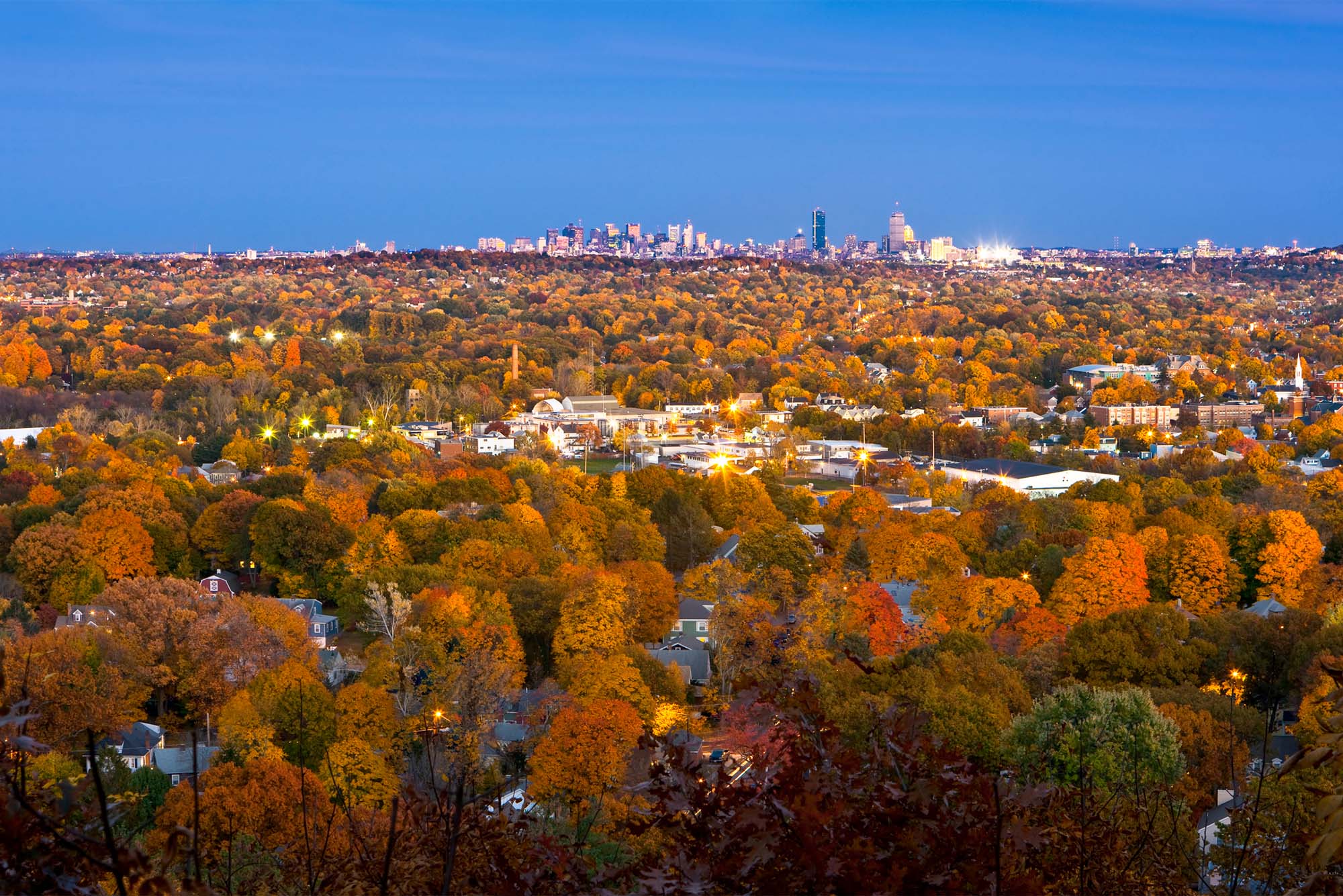 Trees and forests in cities like Boston are absorbing a significant amount of carbon dioxide released from burning fossil fuels, providing “an incredible service to our planet,” says BU ecologist Lucy Hutyra. Photo by iStock/CraigStocks

They may not have lungs like we do, but the soil and trees are breathing in and out all of the time. Trees take in carbon dioxide (CO2), release oxygen by way of photosynthesis, and store carbon in their trunks. And when the leaves land on the ground, soil microbes work to decompose the leaves and other organic matter, which releases carbon dioxide.

Forests actually store more carbon dioxide than they release, which is great news for us: about 30 percent of carbon emissions from burning fossil fuels are taken in by forests, an effect called the terrestrial carbon sink.

“That’s CO2 that’s not in the atmosphere,” says Boston University biogeochemist and ecologist Lucy Hutyra. “We’re not feeling the full effects of climate change because of the terrestrial climate sink. These forests are doing an incredible service to our planet.”

For more than a decade, Hutyra has been investigating what happens to the planet’s “lungs” when large forests are cut down into smaller patches, a process researchers call forest fragmentation.

“We think about forests as big landscapes, but really they are chopped up into all these little segments because of the human world,” says Hutyra, a BU College of Arts & Sciences professor of earth and environment. Forests get cut into smaller parcels, as chunks are taken down to make space for roads, buildings, agriculture, and solar farms—one of the biggest drivers of forest loss in Massachusetts. These alterations to forests create more areas called forest edges—literally, the trees at the outermost edge of a forest.

It has long been assumed that these forest edges release and store carbon at similar rates as forest interiors, but Hutyra and researchers in her lab at BU have discovered this isn’t true. Soils and trees in temperate forest edges in the Northeast United States are acting differently than those farther away from people. In two recent research papers, Hutyra’s team found edge trees grow faster than their country cousins deep in the forest, and that soil in urban areas can hoard more carbon dioxide than previously thought. Their results can challenge current ideas about conservation and the value of urban forests as more than places for recreation.

In one of the most detailed looks at temperate forest edges to date, Hutyra and her research team, including collaborators at the Harvard Forest, examined the growth rates of edge trees compared to the rest of the forest.

Using data from the US Department of Agriculture’s Forest Inventory and Analysis program—which monitors tree size, growth, and land use across the country—Hutyra’s team looked at more than 48,000 forest plots in the Northeast United States. They found trees on the edges grow nearly twice as fast as interior trees—those roughly 100 feet away from the edge.

“This is likely because the trees on the edge don’t have competition with interior forest, so they get more light,” says Luca Morreale, a PhD candidate in Hutyra’s lab and lead author on the paper, published in Nature Communications, outlining the findings. And the more a tree grows, the more carbon it is taking in.

This is good news, considering over 25 percent of the landscape in the Northeast United States is covered by an edge. But this doesn’t mean that more forest fragmentation is a solution for sucking more carbon out of the atmosphere; carbon storage along the edges of fragmented areas does not come close to offsetting the negative side effects of losing forests—like releasing carbon long stored underground back into the atmosphere.

According to Morreale and Hutyra, their study instead points to the need to better understand and conserve existing forest edges, which are typically seen as more disposable. “We are underestimating how much carbon is being taken up by temperate forest edges,” Hutyra says. “We also need to think about how susceptible they might be in the future to climate change,” because previous studies have shown that even though these trees are growing faster from more sunlight, hotter temperatures cause growth rates of edge trees to plummet.

In a second related study, Hutyra teamed up with BU biologist Pamela Templer to find that soils at the forest edge felt the effects of forest fragmentation, just like the trees.

“Soils contain wild amounts of bacteria, fungi, roots, and microorganisms, and just the way we breathe out CO2 when working and being active, they respire CO2, as well,” says Sarah Garvey, a PhD candidate in Hutyra’s lab and lead author of a paper on forest edge soils published in Global Change Biology. “With soil, there is more there than meets the eye.”

Garvey found that not only does forest edge soil release more carbon than interior forest soil, but that the soil is acting dramatically differently in rural and urban forests.

She visited eight field sites in developed and undeveloped areas of Massachusetts every two weeks for a year and a half (skipping the winter, when the ground is covered in ice) to measure the levels of carbon being released from the soils. She and her team would take a snapshot of the temperature and moisture levels of the soil at the forest edge, and then walk about 300 feet into the forest to take measurements again.

They saw that in rural areas with fewer people and buildings, warmer temperatures at the edge of the forest caused leaves and organic matter to decompose faster, forcing the soil microorganisms to work harder and release more carbon dioxide than their cooler, more shaded peers in the forest interior. But, in urban forests, where the ground was significantly hotter and drier, those soils stopped releasing as much carbon.

“It’s so hot and dry that the microbes are not happy and they’re not doing their thing,” Hutyra says. The long-term effect of unhappy soil is uncertain, but the findings also mean that urban soils, like those in Franklin Park, the largest public park in Boston, could have a greater capacity to store carbon than previously expected, says Garvey. Her next project will look deeper into the possible mechanisms behind the different carbon release and storage rates.

Critical for Our Future

Although discovering that urban trees and soils store more carbon might seem like “a double whammy of a good thing,” Hutyra says, it’s unclear if this boost in carbon uptake will last as the planet continues to warm.

Climate change could exacerbate carbon losses from soil, and the trees at the edge of forests in rural or urban areas could be more vulnerable to extreme heat and drought.

With cities and countries making commitments to plant more trees in an effort to curb the impacts of climate change, the researchers in Hutyra’s lab all agree that thinking about the greater context of the trees and soils, and where new trees are planted, is extremely important. Factoring in the elevated amounts of carbon stored by forest edges should be taken into account when looking at long-term projections of climate change, as well.

“We need to think about that as we [decide] what areas to conserve, what to develop, and how to tackle climate change solutions,” Hutyra says. “Is a place like Franklin Park where there’s tons of foot traffic just as valuable to save as a remote forest in Maine where three people visit? There’s no easy answer.”

This work was funded by the National Science Foundation and the United States Department of Agriculture.