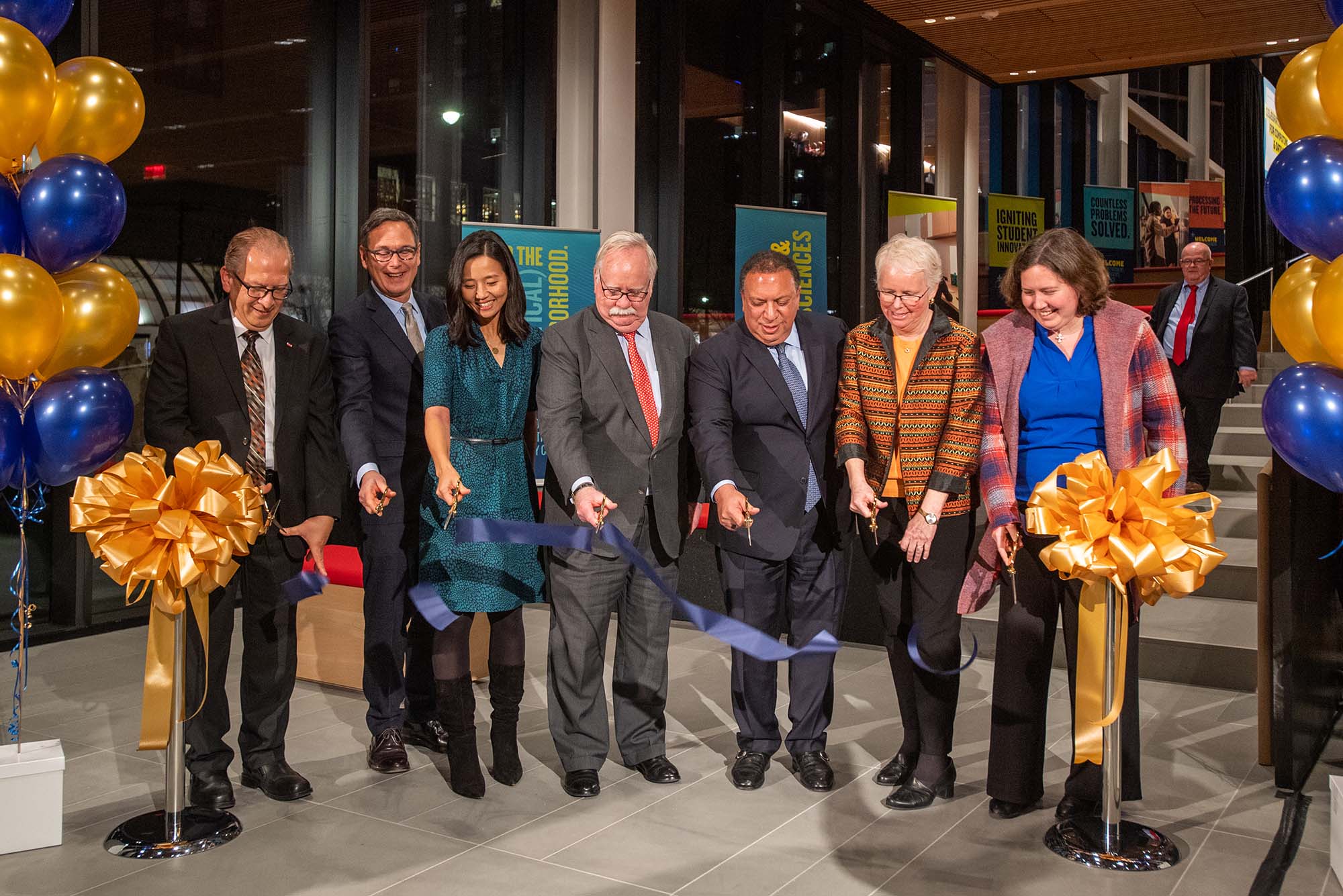 Mayor Wu hails collaborative relationship with BU at ribbon cutting, says new building should be a model for other cities across the country

The coolest building in Boston is almost ready to get to work.

City and University leaders cut a ribbon Thursday afternoon for the ceremonial opening of Boston University’s Center for Computing & Data Sciences, an architectural showpiece and a shining example of sustainable design that will be the home of cutting-edge research and learning when it opens in late January after more than a decade of planning and three years of construction.

“We are in a data-driven revolution, and Boston University is committed to leading in this revolution,” BU President Robert A. Brown said from the building’s centerpiece grand staircase, “and to bringing computing and data science into all of our academic disciplines, not only to build applications, but to shape its ethical use in those applications.”

They will do it in what Jean Morrison, University provost and chief academic officer, called “a truly remarkable building.” The center, at 665 Commonwealth Ave., is 100 percent fossil fuel–free, the most environmentally sustainable, energy-efficient structure BU has ever built, and one of the greenest buildings in all of New England. It is heated and cooled using 31 geothermal wells drilled 1,500 feet underground.

Boston Mayor Michelle Wu seemed moved by the center’s carbon-neutral status. “I hope this building is an example of how each one of us, each institution, each community, each individual—can have an impact on what feels often like a pretty big and daunting set of challenges ahead of us,” she said.

“To have one of our very large buildings very plainly saying that not only can we make it work, not only is the technology there, but we are going to prove it and live it and have a place where you can feel it and experience it—that is so powerful,” Wu said, “and we hope to take this example and replicate it” across the city.

I hope this building is an example of how each one of us, each institution, each community, each individual—can have an impact on what feels often like a pretty big and daunting set of challenges ahead of us.

The opening of the center, which happened on a clear late afternoon that allowed the building’s reflective exterior to shine, “is a critical milestone for the University and indeed for our lives,” added Ahmass Fakahany (Questrom’79), chair of the BU Board of Trustees.

Designed by KPMB Architects in Toronto to serve BU’s sustainability goals, and built by Suffolk Construction, the $305 million center is 19 stories (or 305 feet) tall and has nearly 350,000 square feet of floor space. What most people talk about is its unusual and controversial profile of cantilevered sections rising above the campus and the Charles River like a giant stack of books (BU leadership’s preference) or a precarious game of Jenga (everyone else’s).

“It’s just not a Boston building. It’s out there. It calls attention to itself,” Luigi LaRocca, KPMB founding principal and project manager, told BU Today.

Wu said she’s delighted with the design, though she joked that after passing the building on Storrow Drive recently while driving with her family, her children “are quite disappointed with the architecture of our house.”

The most meaningful activity around the building, of course, will be the research and learning happening inside. As Azer Bestavros, associate provost for computing and data sciences, detailed in an essay for BU Today, the Faculty of Computing & Data Sciences will work to use cutting-edge technology to build a better, more equitable world through learning and collaboration that crosses boundaries between disciplines.

The building is designed to enable that interdisciplinary approach, with plenty of open space for collaboration: public spaces on the lowest floors, including the striking grand staircase where the ceremony was held; classrooms and labs for the College of Arts & Sciences mathematics and statistics and computer science departments in the middle floors; and modern, flexible spaces for the Rafik B. Hariri Institute for Computing and Computational Science & Engineering and the Faculty of Computing & Data Sciences on the upper floors. It will also house associated programs, such as the BU SPARK! entrepreneur incubator.

Brown, Wu, Fakahany, Morrison, and Bestavros cut the ceremonial ribbon along with Kenzie Bok, a Boston city councilor, and Stan Sclaroff, dean of Arts & Sciences. They were joined for the ceremony and a reception by several hundred guests, including many BU trustees, faculty and students, city officials, and representatives of area businesses.

The center was built (watch a slideshow) on a BU-owned parcel at the corner of Granby Street and Comm Ave that was formerly a parking lot, and before that, a Burger King. It is sure to take a prominent place among the city’s architectural greatest hits, such as the Custom House Tower and old and new John Hancock buildings—although, in terms of style, it stands with more recent landmarks like the Leonard P. Zakim Bunker Hill Memorial Bridge and the Institute of Contemporary Art/Boston.

Its outer surfaces of glass and steel are carefully designed to provide a startling-at-times show, whether in sunlight or lit up from within at night, but are also designed to limit direct sunlight entering the building and support sustainability goals.

The ribbon-cutting ceremony also included a touch of cross–Charles River rivalry. “You can’t miss it on the skyline,” Fakahany said, drawing laughter and applause when he added, “Harvard and MIT get to enjoy it every morning with their coffee.”

For These BU Students, Data Science Is Their Present and Their Future