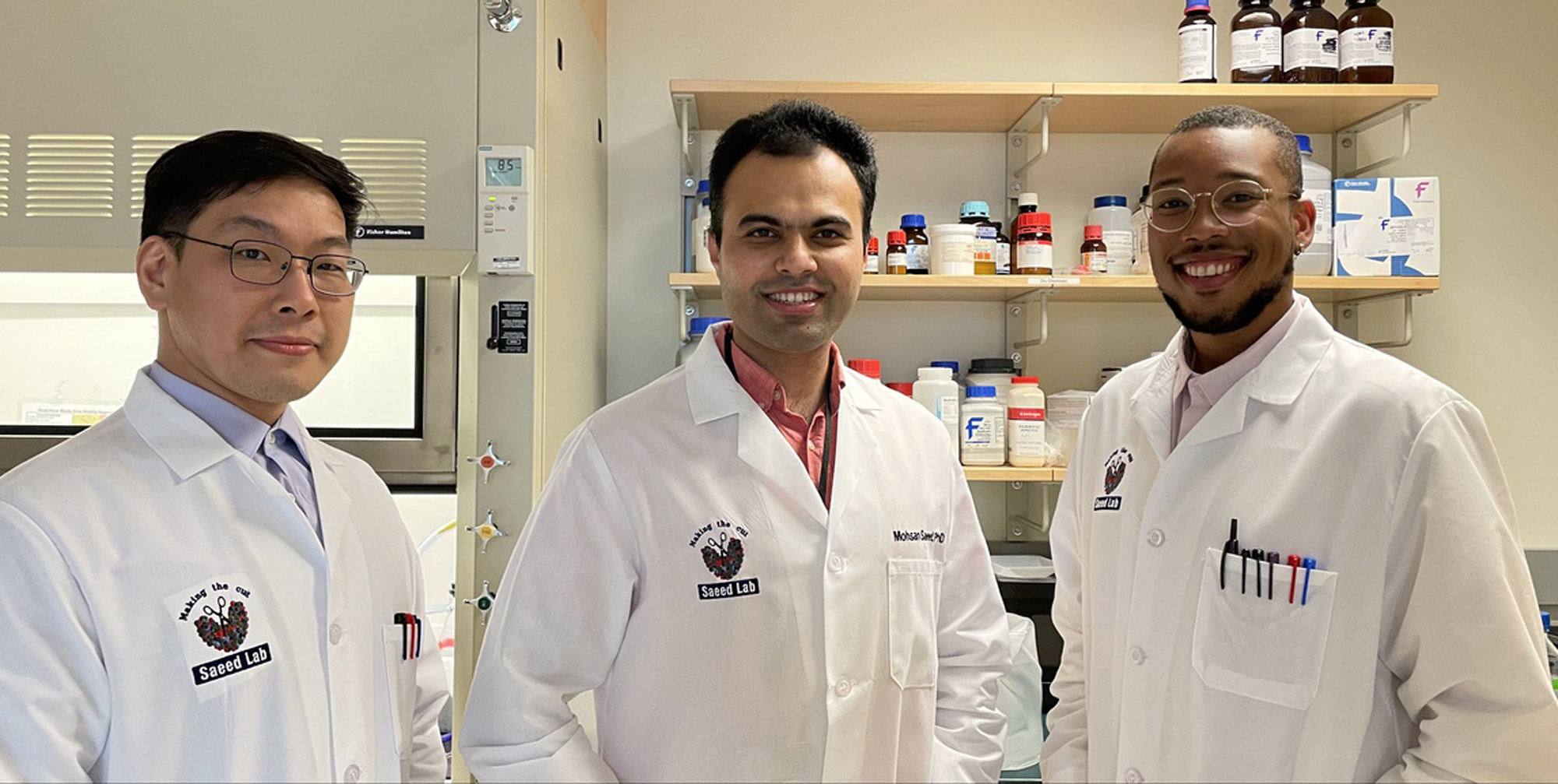 When Broad Institute researchers reached out for help exploring the molecular effects of coronavirus infection, Mohsan Saeed (center) and members of his NEIDL lab, Da-Yuan Chen (left) and Hasahn Conway (right), were ready to leap into action: they had already created human cell lines that could be readily infected with SARS-CoV-2. Photo courtesy of Saeed lab

A new study looking at the way human cells activate the immune system in response to SARS-CoV-2 infection could open the door to even more effective and powerful vaccines against the coronavirus and its rapidly emerging variants keeping the global pandemic smoldering.

Researchers from Boston University’s National Emerging Infectious Diseases Laboratories (NEIDL) and the Broad Institute of MIT and Harvard say it’s the first real look at exactly what types of “red flags” the human body uses to enlist the help of T cells—killers sent out by the immune system to destroy infected cells. Until now, COVID vaccines have been focused on activating a different type of immune cell, B cells, which are responsible for creating antibodies. Developing vaccines to activate the other arm of the immune system—the T cells—could dramatically increase immunity against coronavirus, and importantly, its variants.

In their findings, published in Cell, the researchers say current vaccines might lack some important bits of viral material capable of triggering a holistic immune response in the human body. Based on the new information, “companies should reevaluate their vaccine designs,” says Mohsan Saeed, a NEIDL virologist and the co–corresponding author of the paper.

Saeed, a BU School of Medicine assistant professor of biochemistry, performed experiments on human cells infected with coronavirus. He isolated and identified those missing pieces of SARS-CoV-2 proteins inside one of the NEIDL’s Biosafety Level 3 (BSL-3) labs. “This was a big undertaking because many research techniques are difficult to adapt for high containment levels [such as BSL-3],” Saeed says. “The overall coronavirus research pipeline we’ve created at the NEIDL, and the support of our entire NEIDL team, has helped us along the way.”

Saeed got involved after he was contacted by genetic sequencing experts at the Broad Institute, computational geneticists Pardis Sabeti and Shira Weingarten-Gabbay. They hoped to identify fragments of SARS-CoV-2 that activate the immune system’s T cells.

“The emergence of viral variants, an active area of research in my lab, is a major concern for vaccine development,” says Sabeti, a leader in the Broad Institute’s Infectious Disease and Microbiome Program. She is also a Harvard University professor of systems biology, organismic and evolutionary biology, and immunology and infectious disease, as well as a Howard Hughes Medical Institute investigator.

“We swung into full action right away because my laboratory had [already] generated human cell lines that could be readily infected with SARS-CoV-2,” Saeed says. The group’s efforts were spearheaded by two members of the Saeed lab: Da-Yuan Chen, a postdoctoral associate, and Hasahn Conway, a lab technician.

From the outset of the COVID pandemic in early 2020, scientists around the world knew the identity of 29 proteins produced by SARS-CoV-2 virus in infected cells—viral fragments that now make up the spike protein in some coronavirus vaccines, such as the Moderna, Pfizer-BioNTech, and Johnson & Johnson vaccines. Later, scientists discovered another 23 proteins hidden inside the virus’ genetic sequence; however, the function of these additional proteins was a mystery until now. The new findings of Saeed and his collaborators reveal—unexpectedly and critically—that 25 percent of the viral protein fragments that trigger the human immune system to attack a virus come from these hidden viral proteins.

How exactly does the immune system detect these fragments? Human cells contain molecular “scissors”—called proteases—that, when the cells are invaded, hack off bits of viral proteins produced during infection. Those bits, containing internal proteins exposed by the chopping-up process—like the way the core of an apple is exposed when the fruit is segmented—are then transported to the cell membrane and pushed through special doorways. There, they stick outside the cell, acting almost like a hitchhiker, waving down the help of passing T cells. Once T cells notice these viral flags poking through infected cells, they launch an attack and try to eliminate those cells from the body. And this T cell response isn’t insignificant—Saeed says there are links between the strength of this response and whether or not people infected with coronavirus go on to develop serious disease.

“It’s quite remarkable that such a strong immune signature of the virus is coming from regions [of the virus’ genetic sequence] that we were blind to,” says Weingarten-Gabbay, the paper’s lead author and a postdoctoral fellow in the Sabeti lab. “This is a striking reminder that curiosity-driven research stands at the basis of discoveries that can transform the development of vaccines and therapies.”

“Our discovery…can assist in the development of new vaccines that will mimic more accurately the response of our immune system to the virus,” Sabeti says.

T cells not only destroy infected cells, but also memorize the virus’ flags so that they can launch an attack, stronger and faster, the next time the same or a different variant of the virus appears. That’s a crucial advantage, because Saeed and his collaborators say the coronavirus appears to delay the cell’s ability to call in immune help.

Based on their findings, Saeed says, a new vaccine recipe, incorporating some of the newly discovered internal proteins making up the SARS-CoV-2 virus, would be effective in stimulating an immune response capable of tackling a wide swath of newly emerging coronavirus variants. And given the speed with which these variants continue to appear around the world, a vaccine that can provide protection against all of them would be a game changer.