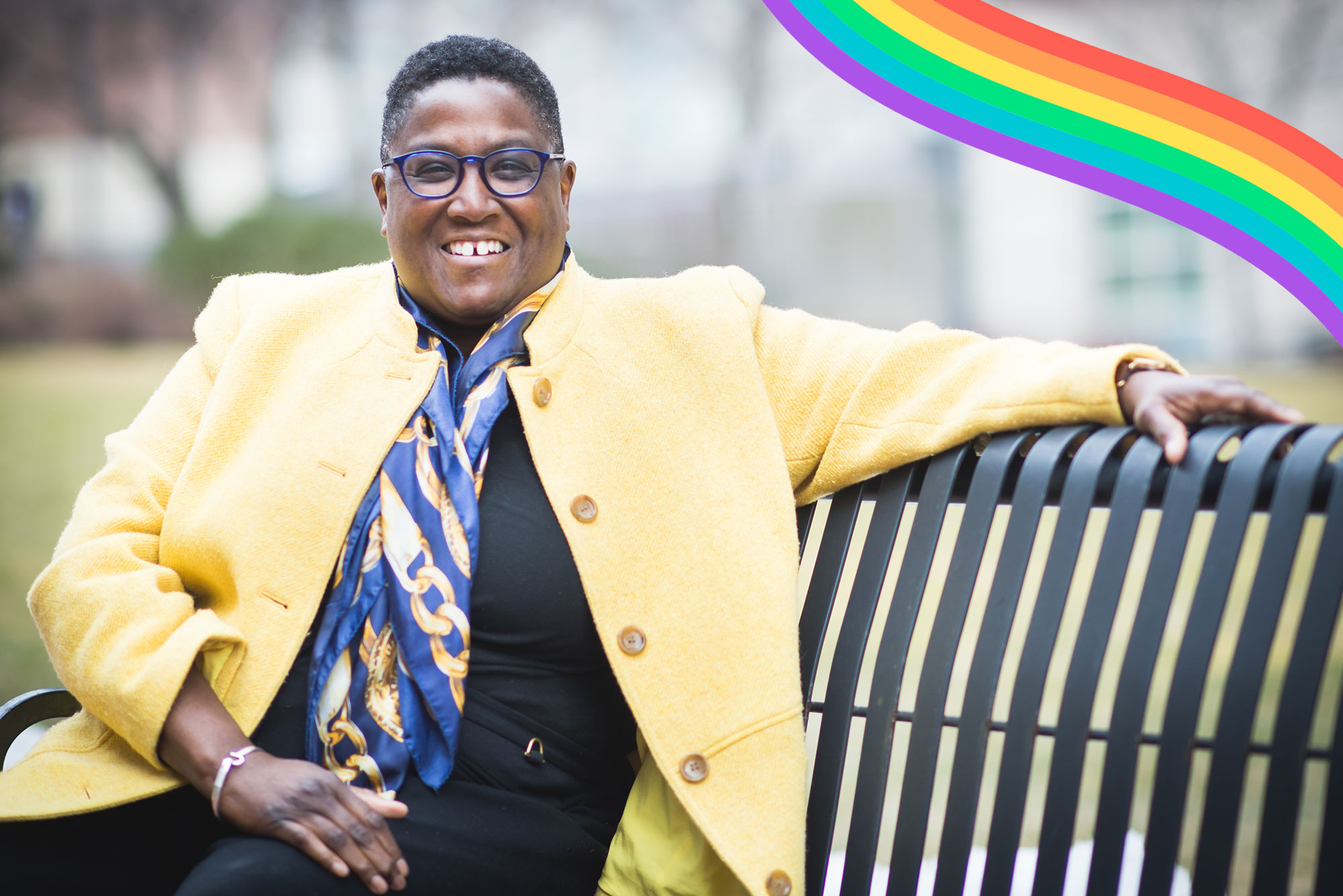 “It’s amazing how much you continue to ripen in life,” says Judi Burgess, BU’s director of labor relations. Photo by Jackie Ricciardi

To mark the Out List’s release, BU Today is featuring a series of coming-out stories from list members, bringing you a different personal story each week during Pride Month. Up this week: Judi Burgess, BU director of labor relations and a member of the University’s LGBTQIA Task Force.

“I’m still coming into my own”

For me, it’s almost more of a question of: when was I ever in? I didn’t say it out loud, but I came out to myself pretty early. I mean, I didn’t wear dresses when I was little—it got to a point where I refused to wear dresses to church anymore. I said to my parents, “Why would God care what I look like? Why can’t I wear pants?” because that was what I was most comfortable in. When it got to be too much for my parents to tussle with me about it, they would just let me not go. So I didn’t have to go to church anymore, which was awesome.

I grew up in a very religious household. My dad was a minister and an English teacher and my mom was a high school librarian and very religious; they were both African-Americans who grew up in a segregated South. So I didn’t know any gay people. When I first heard the term “lezzie” back in the ’70s—when my sister’s friend called me a lezzie and said I was a lesbian—I didn’t even know what it meant. I just remember being referred to as a tomboy quite a bit, which I was proud of! I thought that was cool. And as I got older, I realized I was attracted to women.

Even though I came out to myself at a young age, I don’t think I felt comfortable saying I was a lesbian until I did my undergrad at Howard University in Washington, D.C. Growing up, I didn’t have a lot of gay role models other than through literature and through art. So I read everything I could about LGBTQ-identifying folks—I would go to this bookstore in Dupont Circle that was an LGBTQ bookstore, and I would spend the whole day there reading everything related to being gay and everything by anyone gay. And I found community through the books and through the reading.

I would also go to queer events like “gay night” at this club called Tracks. I’d see the fine arts people from Howard there, or other faces that I’d recognize, but I didn’t really know anyone personally. I’ve always been a very outgoing person, but it was a very lonely position in those days, being in the Black community and not really knowing other lesbians.

When I was home during the summers, between working and being with my parents, I would go to gay bookstores like Giovanni’s Room in Philadelphia, or to a women’s club called Hepburn’s. I was living an out lifestyle, and I would tell my parents about where I was going, but they didn’t really ask questions. So it’s not like I was closeted; I just hadn’t put my stake in the sand with them and said, “I’m a lesbian,” yet.

I decided to officially tell my parents when I was in law school. I had broken up with my girlfriend, and as I was talking to my dad over dinner one night, I decided to tell him that I was gay. He absolutely did not bat an eye. My dad said, “Juditra, we know you better than you know yourself. You’re not telling me anything I don’t know, and I love you very much.” He was just who I needed, and he was so amazing. And then I said, “I want to tell Mom; how do you think she’s going to respond?” And he said, “We’ve talked about it; she knows you’re gay. You were always playing with trucks when you were little; you were always outside working in the garden with me; you knew where all my tools were. Even if she says she doesn’t know, she does.”

So I decided to tell my mom. Her reaction was quite different; she was not accepting. She said that I had become “too educated for my own good”—those were her words. She just wasn’t accepting that she had a daughter who was gay. Once that happened, I sort of went my own way and continued my life for a while.

Over the years, my mom became more loving and more understanding. Especially when I met my current partner—she not only accepted me, but she came to my wedding, and she loved my spouse. For her, it was more of a process of making peace with it. Once she got beyond it, she was more in my life. Things really changed when my wife and I had our first child in 2007; she just loved our daughter and thought we were good parents. Whereas my dad would probably have been in a Pride parade, I don’t think my mom ever would have been. But I knew that she was very proud of me.

It’s amazing how much you continue to ripen in life with your experiences. As all of my identities intersect around me—a Black woman, lesbian, parent, former professional lawyer—I’m still coming into my own, even at this point in my life. One of the best experiences has been being a parent with my wife to our amazing kids, talking to them about differences, and making sure they grow up in a really supportive environment. I’m very grateful that I’ve been able to have the experiences I have, especially here in the commonwealth. We’ve been embraced by so many friends and family. So it’s been good. It’s been good.

There are 16 comments on My Coming Out Story: Judi Burgess