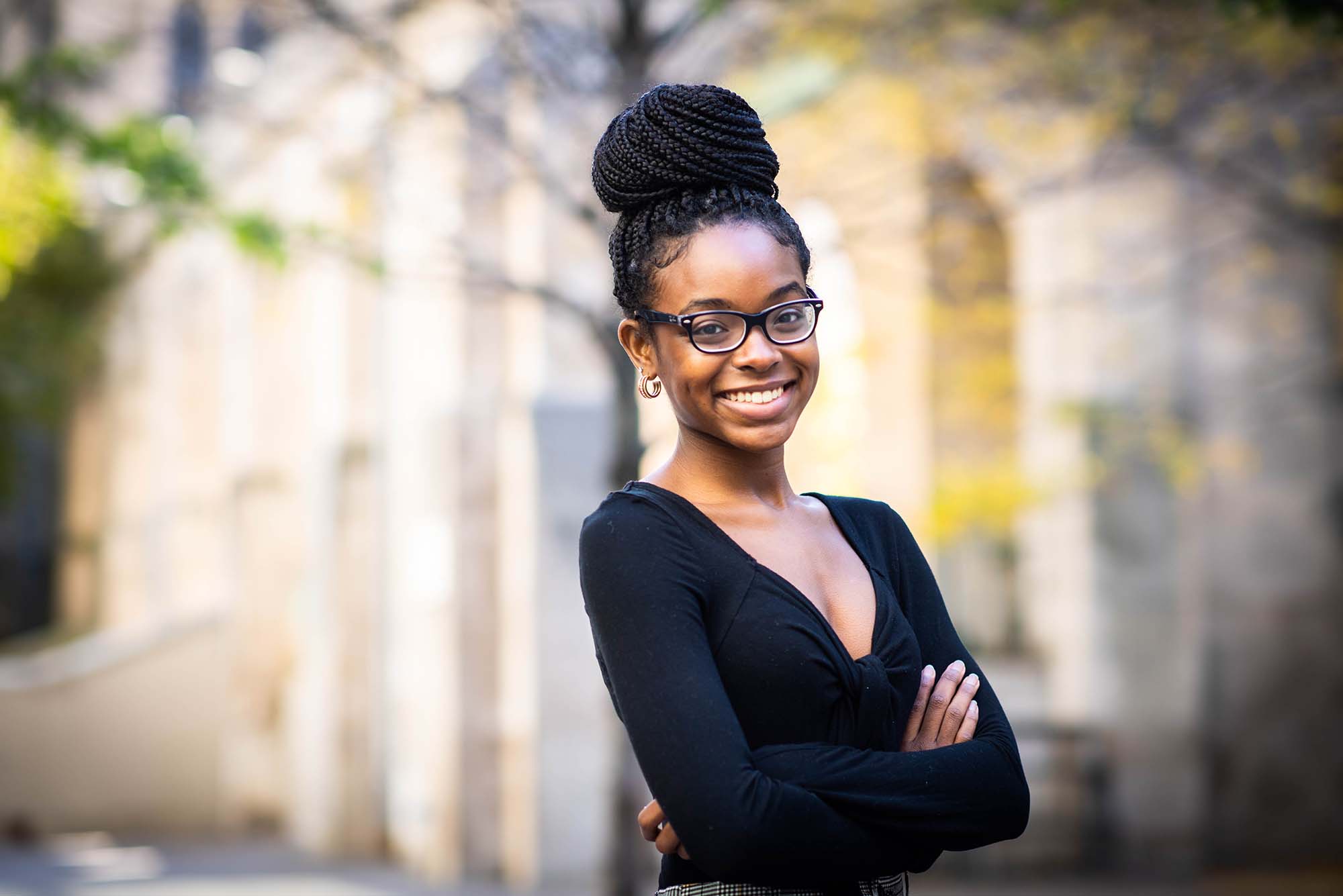 Alicia Dennery (CAS’25), one of this year’s 27 Boston Public Schools graduates receiving a Thomas M. Menino Scholarship to BU, says it “has taken a burden away so I can solely focus on my academics.” Photo by Jackie Ricciardi

“I am incredibly, incredibly blessed to be in an environment where I am meeting so many great people who inspire me,” says Alicia Dennery (CAS’25), a Boston Public Schools graduate and one of this year’s BU Thomas M. Menino Scholars. “Especially being a Black woman and trying to go into STEM. I want to be a doctor, and this scholarship has taken a burden away so I can solely focus on my academics.”

A graduate of Boston Latin Academy, Dennery, whose parents both arrived here as teenaged immigrants from Haiti, is a first-generation American. Her father passed away years ago, and her mother works as a nurse. Her twin brother attends UMass Amherst.

“It’s been difficult growing up, because she has to take care of two kids on her own,” Dennery says from her room in The Towers on Bay State Road. “I applied for this scholarship because it would be very hard for my mom to pay for me out of pocket, and I got it. I was very, very excited and grateful. To be awarded this scholarship is like a huge burden taken off her.”

The psychology major is one of 27 Boston Public Schools (BPS) 2021  graduates receiving full-tuition merit scholarships to BU through the Menino Scholarship program, based on their academic record. Menino Scholars are also eligible for need-based aid for the cost of room and board.

Both scholarship programs support students for all four years of their undergraduate education, as long as they maintain at least a 2.0 GPA while earning a minimum of 12 credits per semester. Starting with their BU second semester, the Community Service scholars must also complete 25 hours of volunteer work each semester. If they meet this requirement through the fall of their senior year, their final semester work is waived.

Add it up: that’s 84 Boston Public Schools graduates starting classes at BU this year on scholarships totaling more than $18.6 million over four years. And those are just this year’s arrivals. Some 352 BPS graduates are attending Boston University through the Menino and Community Service programs during the 2021-2022 academic year. All told, more than 2,500 students have received one of the two scholarships since the programs began.

“When I applied to the scholarship, I felt like I was extending the part of myself that went to school in Boston,” says Community Service scholar Theresa Piard (Sargent’25), a resident of Boston’s Mattapan neighborhood and a graduate of John D. O’Bryant School of Mathematics and Science.

“Coming here knowing that there’s other kids from the city like me, I can find a community to be a part of, where we have a common thing—we’re all from Boston, we went to school here,” says Piard, whose Warren Towers roommate is also from Boston—and a Menino scholar. “A community in this big school where there’s so many different colleges—‘I’m from Dorchester,’ ‘I’m from Mattapan’—having that common ground, where they know, like, the weather, and how the train works, it’s really nice.”

Piard is studying health sciences, with plans to earn a doctorate in physical therapy.

“I used to run track in high school, and one time I got injured, and I had to go to PT to fix my ankle. And the environment was really welcoming, not judgy,” she says. “The PT was pretty chill—it felt like I was just having a conversation with another friend of mine. I’d be so excited, like, ‘I’m going to go to PT!’”

Brenda Cassellius, Boston’s superintendent of schools, spoke at the annual ceremony honoring the incoming students, held at the Questrom School of Business at the end of August. The scholarship programs have “awarded close to $190 million in scholarships to over 2,000 students,” Cassellius noted. “That’s absolutely incredible, and I can speak for everyone at the Boston Public Schools when I say, thank you to Boston University.”

“Your admission to Boston University reflects your years of hard work, ambition, and drive under some very challenging situations,” Robert A. Brown, BU president, told the students during the welcome ceremony, “and I would add to that your adaptability and your perseverance. We’re proud to have you here, and I know your parents are just as proud to be here with you.”

The $18.6 million in aid over the students’ four years, Brown said, demonstrates “the history and scale of Boston University’s commitment to providing educational opportunities to graduates of the Boston Public Schools.”

“The Menino and BPS Community Scholarships are the capstone of BU’s deep commitment to the Boston Public Schools,” says Michael Dennehy (CAS’92), executive director of College Access and Student Success at BU’s Wheelock College of Education & Human Development and a former Menino scholar himself.

The Brighton native says the program changed his life. “The Menino Scholarship provided me with a world-class education and helped me discover my career path through my undergraduate work as a tutor with Upward Bound. I was introduced to Upward Bound by my Menino Scholar advisor, Ruth Shane. When Ruth retired in 2014, I was honored by the opportunity to serve as advisor to the Menino Scholars.”

The Menino Scholars program has existed under various names since 1974, but in 2013 was named for the late Boston Mayor Thomas M. Menino (Hon.’01), a founding director of BU’s Initiative on Cities. The Community Service program welcomed its first scholars to campus in 2009. They are each assigned a faculty or staff mentor they meet with at least a couple of times each semester throughout their BU career.

Menino Scholar Nick Pham (ENG’25), who hopes to do research in biomechanical engineering, lives in Dorchester and also graduated from John D. O’Bryant School of Mathematics and Science. His parents both immigrated from Vietnam as kids. He went to an Upward Bound program at BU as a high school freshman and had a good experience (despite sweltering in summer heat in Warren Towers, he says). Pham followed up the next year with a program on the Medical Campus.

“I really liked it here,” he says. “I guess the ultimate decider was when I heard about the Menino program from one of my mother’s customers [at the bank where she worked]. He was a police officer. He mentioned he was a BU graduate and how he learned from a friend about the Menino program, and he wanted to tell my mom about this opportunity. I wouldn’t say it was easy to grasp, but it was a chance to not have to worry about money. The [application] essay for the Menino really helped me to reflect back on who I was.”

Alicia Dennery first heard about the scholarships from her cousin Jamesy Jean-Michel (ENG’12,’16), who attended BU on a Menino scholarship. By September of Dennery’s high school senior year, none of her counselors had mentioned it. So she emailed them and said she would like to be considered. “They were like, ‘Oh, you’re a little ambitious,’” she says with a laugh. The application process wasn’t open until December.

STEM classes offer a welcome challenge for Dennery. “I have to work at it constantly. I do go to office hours, I do go to tutoring,” she says. “But for what I want to do, it’s necessary.” She credits her nurse mother for guiding her ambitions.

“When I was younger, she would take me to Boston Children’s Hospital, which was my primary care provider,” Dennery says. “And my doctor was Dr. Webster, and she was the sweetest doctor in the whole entire world. She’s retired now, but just that little glimpse was amazing, and the nurses were awesome people. My mom was always like, you can be a nurse, but strive for the stars. Why don’t you go a little further?”