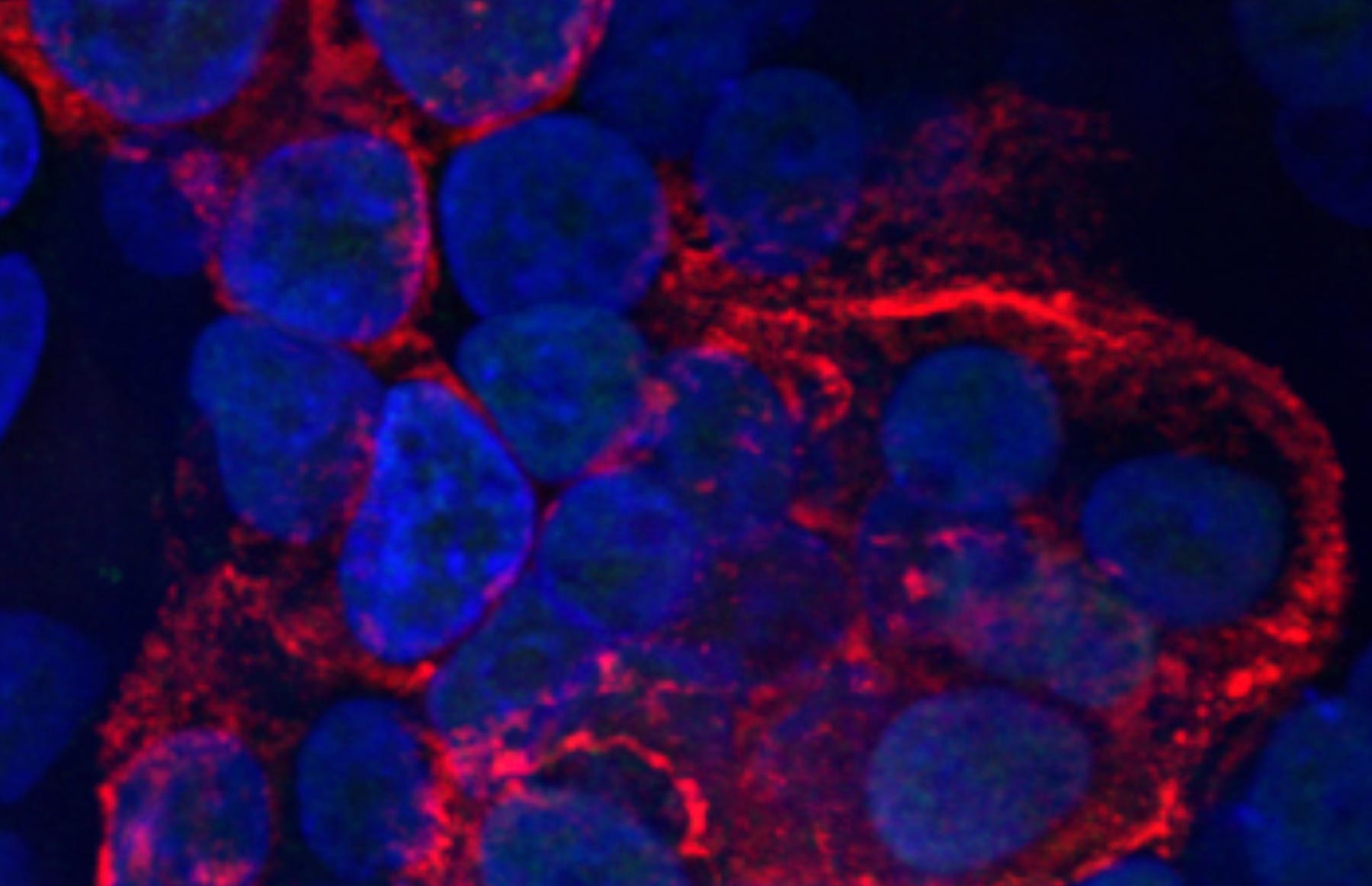 What if scientists knew exactly what impact the SARS-CoV-2 virus had inside our lung cells, within the first few hours of being infected? Could they use that information to find drugs that would disrupt the virus’ replication process before it ever gets fully underway? The discovery that several existing FDA-approved drugs—including some originally designed to fight cancer—can stop coronavirus in its tracks indicates the answer is a resounding yes.

A team of Boston University researchers—hailing from BU’s National Emerging Infectious Diseases Laboratories (NEIDL), the Center for Regenerative Medicine (CReM) at BU’s Medical Campus, and BU’s Center for Network Systems Biology (CNSB)—embarked on a months-long, collaborative and interdisciplinary quest, combining multiple areas of expertise in virology, stem cell–derived lung tissue engineering, and deep molecular sequencing to begin answering those questions. They simultaneously infected tens of thousands of human lung cells with the SARS-CoV-2 virus, and then tracked precisely what happens in all of those cells during the first few moments after infection. As if that was not complicated enough, the team had to cool their entire high-containment research facility inside the NEIDL to a brisk 61 degrees Fahrenheit.

The result of that challenging and massive undertaking? The BU team has revealed the most comprehensive map to date of all the molecular activities that are triggered inside lung cells at the onset of coronavirus infection. They also discovered there are at least 18 existing, FDA-approved drugs that could potentially be repurposed to combat COVID-19 infections shortly after a person becomes infected. Experimentally, five of those drugs reduced coronavirus spread in human lung cells by more than 90 percent. Their findings were recently published in Molecular Cell.

Now, academic and industry collaborators from around the world are in contact with the team about next steps to move their findings from bench to bedside, the researchers say. (Although COVID-19 vaccines are starting to be rolled out, it’s expected to take the better part of a year for enough people to be vaccinated to create herd immunity. And there are no guarantees that the current vaccine formulations will be as effective against future SARS-CoV-2 strains that could emerge over time.) More effective and well-timed therapeutic interventions could help reduce the overall number of deaths related to COVID-19 infections.

“What makes this research unusual is that we looked at very early time points [of infection], at just one hour after the virus infects lung cells. It was scary to see that the virus already starts to damage the cells so early during infection,” says Elke Mühlberger, one of the study’s senior investigators and a virologist at BU’s NEIDL. She typically works with some of the world’s most lethal viruses like Ebola and Marburg.

“The most striking aspect is how many molecular pathways are impacted by the virus,” says Andrew Emili, another of the study’s senior investigators, and the director of BU’s CNSB, which specializes in proteomics and deep sequencing of molecular interactions. “The virus does wholesale remodeling of the lung cells—it’s amazing the degree to which the virus commandeers the cells it infects.”

Viruses can’t replicate themselves because they lack the molecular machinery for manufacturing proteins—that’s why they rely on infecting cells to hijack the cells’ internal machinery and use it to spread their own genetic material. When SARS-CoV-2 takes over, it completely changes the cells’ metabolic processes, Emili says, and even damages the cells’ nuclear membranes within three to six hours after infection, which the team found surprising. In contrast, “cells infected with the deadly Ebola virus don’t show any obvious structural changes at these early time points of infection, and even at late stages of infection, the nuclear membrane is still intact,” Mühlberger says.

The nuclear membrane surrounds the nucleus, which holds the majority of a cell’s genetic information and controls and regulates normal cellular functions. With the cell nucleus compromised by SARS-CoV-2, things rapidly take a bad turn for the entire cell. Under siege, the cells—which normally play a role in maintaining the essential gas exchange of oxygen and carbon dioxide that occurs when we breathe—die. As the cells die, they also emit distress signals that boost inflammation, triggering a cascade of biological activity that speeds up cell death and can eventually lead to pneumonia, acute respiratory distress, and lung failure.

“I couldn’t have predicted a lot of these pathways, most of them were news to me,” says Andrew Wilson, one of the study’s senior authors, a CReM scientist, and a pulmonologist at Boston Medical Center (BMC), BU’s teaching hospital. At BMC, Boston’s safety net hospital, Wilson has been on the front lines of the COVID-19 pandemic since March 2020, trying to treat and save the sickest patients in the hospital’s ICU. “That’s why our [experimental] model is so valuable.”

“Science is the answer—if we use science to ask the lung cells what goes wrong when they are infected with coronavirus, the cells will tell us.”

The team leveraged the CReM’s organoid expertise to grow human lung air sac cells, the type of cell that lines the inside of lungs. Air sac cells are usually difficult to grow and maintain in traditional culture and difficult to extract directly from patients for research purposes. That’s why much coronavirus research to date by other labs has relied on the use of more readily available cell types, like kidney cells from monkeys. The problem with that is kidney cells from monkeys don’t react the same way to coronavirus infection as lung cells from humans do, making them a poor model for studying the virus—whatever is learned from them doesn’t easily translate into clinically relevant findings for treating human patients.

“Our organoids, developed by our CReM faculty, are engineered from stem cells—they’re not identical to the living, breathing cells inside our bodies, but they are the closest thing to it,” says Darrell Kotton, one of the study’s senior authors. He is a director of the CReM and a pulmonologist at BMC, where he has worked alongside Wilson in the ICU treating COVID-19 patients. The two of them often collaborated with Mühlberger, Emili, and other members of their research team via Zoom calls that they managed to join during brief moments of calm in the ICU.

In another recent study using the CReM’s engineered human lung cells, the research team confirmed that existing drugs remdesivir and camostat are effective in combating the virus, though neither is a perfect fix for controlling the inflammation that COVID-19 causes. Remdesivir, a broad-use antiviral, has already been used clinically in coronavirus patients. But based on the new study’s findings that the virus does serious damage to cells within hours, setting off inflammation, the researchers say there’s likely not much that antiviral drugs like remdesivir can do once an infection has advanced to the point where someone would need to be put on a ventilator in the ICU. “[Giving remdesivir] can’t save lives if the disease has already progressed,” Emili says.

Seeing how masterfully SARS-CoV-2 commandeers human cells and subverts them to do the manufacturing work of replicating the viral genome, it reminded the researchers of another deadly invader.

“I was surprised that there are so many similarities between cancer cells and SARS-CoV-2-infected cells,” Mühlberger says. The team screened a number of cancer drugs as part of their study and found that several of them are able to block SARS-CoV-2 from multiplying. Like viruses, cancer cells want to replicate their own genomes, dividing over and over again. To do that, they need to produce a lot of pyrimidine, a basic building block for genetic material. Interrupting the production of pyrimidine—using a cancer drug designed for that purpose—also blocks the SARS-CoV-2 genome from being built. But Mühlberger cautions that cancer drugs typically have a lot of side effects. “Do we really want to use that heavy stuff against a virus?” she says. More studies will be needed to weigh the pros and cons of such an approach.

The findings of their latest study took the four senior investigators and scientists, postdoctoral fellows, and graduate students from their laboratories almost four months, working nearly around the clock, to complete the research. Of critical importance to the team’s leaders was making sure that the experimental setup had rock-solid foundations in mimicking what’s actually happening when the SARS-CoV-2 virus infects people.

“Science is the answer—if we use science to ask the lung cells what goes wrong when they are infected with coronavirus, the cells will tell us,” Kotton says. “Objective scientific data gives us hints at what to do and has lessons to teach us. It can reveal a path out of this pandemic.”

He’s particularly excited about the outreach the team has received from collaborators around the world. “People with expertise in supercomputers and machine learning are excited about using those tools and the datasets from our publication to identify the most promising drug targets [for treating COVID-19],” he says.

Kotton says the theme that’s become obvious among COVID-19 clinicians and scientists is understanding that timing is key. “Once a patient is on a ventilator in the ICU, we feel limited in what we can do for their body,” he says. “Timing is everything, it’s crucial to identify early windows of opportunity for intervention. You can keep guessing and hope we get lucky—or you [do the research] to actually understand the infection from its inception, and take the guesswork out of drug development.”

This research was funded by the National Institutes of Health, the Australian National Health and Medical Research Council, the Pulmonary Fibrosis Foundation, the Massachusetts Consortium on Pathogen Readiness, the C3.ai Digital Transformation Institute, the Canadian Institutes of Health Research, and Fast Grants.

How Coronavirus Damages Lung Cells within Mere Hours
3
share this