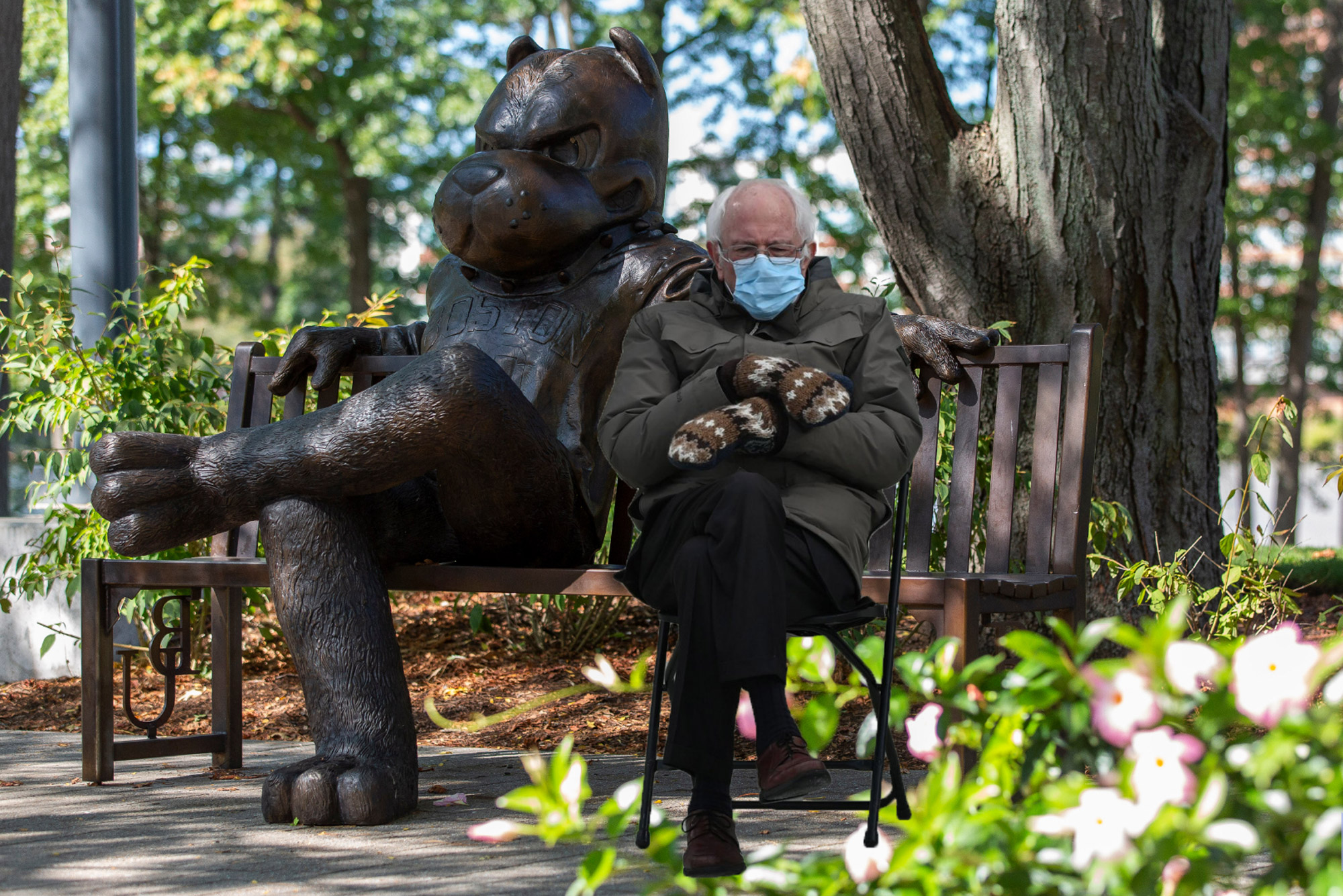 Senator Bernie Sanders (D-Vt.) cozies up next to BU’s mascot on the University’s Rhett bench. Photo by Katherine Taylor/kapwing

By now, we’ve all seen the image. And the memes! Vermont Senator Bernie Sanders, clad in a puffy winter coat and huge knit mittens, arms and legs crossed, sitting outside in a folding chair at the inauguration of President Joe Biden and Vice President Kamala Harris January 20. Since that shot appeared, Sanders and his folding chair have been propped up next to Forrest Gump on that iconic Alabama bus stop bench, placed on the Star Trek USS Enterprise, seen on a New York City subway car, have landed on the moon, and even been perched upon the Iron Throne made famous by the bloodthirsty royalty of HBO’s Game of Thrones series.

So, why was the internet so delighted (and creatively inspired) by the sight of the slouchy senator sitting in the cold? The Brink reached out to Gianluca Stringhini, a meme expert, cybercrime researcher, and Boston University College of Engineering assistant professor of electrical and computer engineering, to explain what research can tell us about the making of a mega-meme.

Stringhini and other collaborators recently published the findings of a study that used artificial intelligence to dissect what makes some memes go viral and reach millions, while others are total flops, never to be seen by more than a few viewers. (The research team will present their findings more broadly later this year at the ACM Conference on Computer-Supported Cooperative Work and Social Computing.)

Here’s what Stringhini’s new research can tell us about the success of the Bernie Sanders inauguration meme.

The Brink: You recently published a study on what sets viral memes apart from those that never gain attention and traction. What are the three main dimensions you looked at as you analyzed viral vs. nonviral memes?

Stringhini: Broadly speaking, we wanted to understand if memes obey the same rules as other visual artworks in how they capture their viewer’s attention. To this end, we looked at three dimensions. The first one is the composition of the meme, for example whether it is composed of multiple panels or if it uses a small scale. The second one relates to the main subject in the image, for example whether the focus is on a character, and if that character shows a peculiar facial expression or pose. The third one relates to the audience of the meme: we hypothesized that image memes that require specific knowledge to be understood might be less likely to get shared than those that are easily accessible to everyone.

Across those three dimensions, are there common characteristics that viral memes share?

We found a number of indicators that are typical of viral memes. Images that use a close-up scale on a character are more likely to go viral, as are those where the character shows a strong positive or negative emotion, or assumes a particular posture. We also find that images that contain a lot of text are less likely to go viral, while those with no text at all or with succinct messages do tend to go viral.

Given your findings on what makes a meme go viral, why do you think the inauguration day image of Bernie Sanders made the internet go wild? What about that image was so irresistible to meme artists who then photoshopped the cold but comfortable Senator Sanders into nearly every setting imaginable?

This meme of Bernie Sanders has many of the typical traits that we identified. We have a character showing a funny pose, as well as some relatable emotion (being cold but comfortable as you say). This makes the image relatable, and makes it suitable to be copy-pasted in all sorts of contexts.

What advice do you have for wannabe viral meme artists? How can they look for opportunities to create a meme that catches the internet’s attention?

I think that funny pictures where people show a very pronounced reaction are great candidates for good memes, especially if the subject of the image is a well-known or beloved character.

There is 1 comment on The Bernie Sanders Sitting Meme’s Instant Popularity, Explained by Science