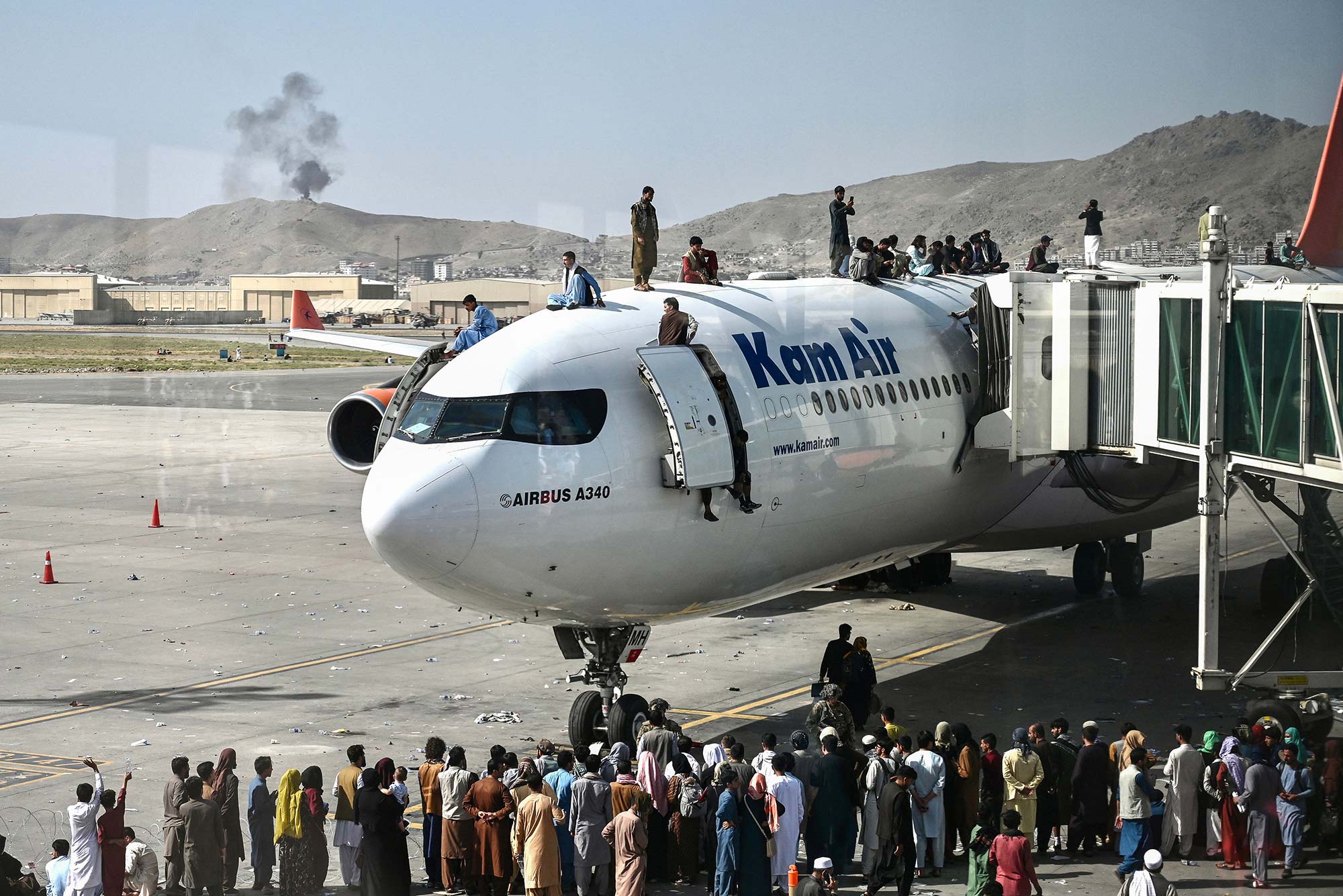 After the Taliban overtook Kabul, Afghanistan’s capital, Afghan people climbed atop a plane on August 16, 2021, as thousands of people mobbed the city’s airport in an attempt to flee the country. Photo by Wakil Kohsar/AFP via Getty Images

Despite withdrawal of troops, they argue United States must hold Taliban accountable and protect the human rights of Afghans

On Sunday, the world was stunned when Afghanistan’s government ceded control of the country’s capital city of Kabul to the control of the Taliban, whose power had been kept at bay during the 20-year-long presence of US troops, which is now coming to a rapid end.

“After a 20-year engagement, you have the same people the US has tried to push out of power taking over again,” says Shamiran Mako, a Boston University Frederick S. Pardee School of Global Studies assistant professor of international relations. The Taliban have a poor track record when it comes to human rights, she says, especially the rights of minorities, women, and girls. “The expedient withdrawal has produced a humanitarian catastrophe, with people desperately chasing down US Air Force planes” in an attempt to flee.

What does the Taliban takeover feel like for the people of Afghanistan? To try and make sense of that question, Mako—who studies politics and international relations of the Middle East with a focus on foreign intervention, ethnic conflict, political violence in divided societies, and post-conflict state-building and peacebuilding—suggested The Brink also speak to Sher Jan Ahmadzai, an Afghanistan expert with intimate ties to the country and its past governance.

“My first knee-jerk reaction was total shock,” says Ahmadzai, who served in the Office of the President, Islamic Republic of Afghanistan, before moving to the United States in 2007. He is now the director of the University of Nebraska Omaha Center for Afghanistan Studies. Over the last several days, he has kept in close touch with colleagues and personal contacts in Afghanistan, and he says the overall sentiments he is hearing from people are “betrayal, disappointment, and dismay—a feeling of abandonment.”

Strategic blunders by the Biden administration, Ahmadzai and Mako say, are a large part of the equation.

“It was unbelievable to see the government crumble in a few hours,” Ahmadzai says. “The more we look into it, the more we can understand why [that happened]—and a good chunk of the blame goes to the US. There’s no doubt the Afghan government was dealing with corruptness and inefficiencies, no doubt that the Taliban—supported by Pakistan—were gaining ground, but in the midst of all this, [US] presence was guaranteeing security and stability. US troops provided morale to the Afghan forces and government, and as soon as the US suddenly withdrew, the morale was gone.”

“The question has never been about whether the US should leave Afghanistan,” Mako says. “It is about the nature of the withdrawal, particularly given that the humanitarian catastrophe should not have come as a shock to the Biden administration.” She adds that the pullout of the US military presence and the subsequent takeover by the Taliban has left Afghan men and women who served alongside US troops, as well as Afghan journalists, human rights workers, translators, scholars, and others who resisted Taliban rule at risk for retaliation.

In contrast, Mako says, the United States did consider the implications its military withdrawal would pose for US embassy and military members—and it made effective plans to evacuate American personnel from the country. That same level of consideration should have been made for Afghan people, she says, by engaging with the United Nations, UNICEF, and allies in Europe and Canada to open up humanitarian corridors to allow for the most vulnerable Afghans to safely flee the country.

“The US and its allied partners are losing leverage to provide humanitarian assistance inside the country, given the Taliban’s catastrophic takeover,” Mako says.

Although the United States has quickly lost much of its grip, Ahmadzai says, it still needs to take responsibility for its role in the developing crisis.

“We have to provide humanitarian corridors to people that we think are vulnerable to revenge killings” by the Taliban, he says. “People who [during the US engagement] worked with the US and other international communities and organizations, they are potentially feeling unsafe. Because of their associations with the US and other countries, some of them are not even [comfortable] leaving their homes right now.”

Ahmadzai says the United States holds a lot of leverage with countries like Pakistan that support the Taliban. “We should force Pakistan and the Taliban to create a government representative of all Afghans,” he says. The kind of government that would preserve the hard-won rights of women and minorities, safeguard the infrastructure that’s been developed, and uphold the values that Afghans aspire to—achieved through democratic elections.

What levers does the United States still have sway over? Ahmadzai says there are many. “The US has a lot of influence with international aid. Afghanistan is a poor country and it can’t generate enough revenue to support its own government; Afghanistan’s budget is already dependent on international help,” he says. And the Taliban will need that budget.

The United States can also focus pressure on Pakistan. “We have to have talks with Pakistan to support peace in Afghanistan, because [Pakistan] holds the strongest cards,” he says. That’s because Pakistan has provided safe haven for Taliban people throughout the 20-year US campaign.

But Pakistan’s national budget receives funding from the International Monetary Fund, according to Admadzai, and aid from the United Nations and other global organizations. “These are all tools available to the US,” he says, adding that the most severe could involve the United States placing sanctions on individuals who support terrorists or Taliban extremists.

“The international community needs to hold the Taliban accountable and responsible for keeping the values that Afghans have achieved [in the last 20 years], and not just for urban Afghans,” Ahmadzai says. Those values include the “right to elect leaders, freedom of speech, freedom of education for women, girls, and men equally, freedom to pursue work, and for gathering and movement, especially for women and minorities.”

Thomas Barfield, a BU College of Arts & Sciences professor of anthropology and president of the American Institute of Afghanistan Studies, is worried about what the Taliban are going to do with their newly seized power.

“They’re saying they aren’t going to act like they did in the 1990s. But they have a kill list. Are they going to kill people? Are they going to refuse to allow women to work or receive education?” Barfield says. “My concern is that the Taliban have promised a lot of things, but now that they occupy the capital, what are they actually going to do?”

While Canada has already offered 20,000 additional spots for refugees to accommodate Afghans fleeing the country, Barfield says the United States has remained conspicuously quiet. “Biden said he would leave no one behind, referring to Afghans that work with the US, and now many of them are at risk. The US owes an obligation…to keep up their end of what they promised.”

Barfield wants to know what the US policy and action plan is beyond committing to getting all Americans out of Afghanistan. During the Vietnam War, he says, the United States offered asylum to hundreds of thousands of people. So far, toward Afghans terrified by the Taliban takeover, the United States has offered only silence, he says.

“We’ve spent 20 years building up an entirely different society in many ways, and now we just let the [Afghan people] go?” he says.

There are 14 comments on As Taliban Retakes Afghanistan, Experts Say Biden Administration Made Strategic Blunders