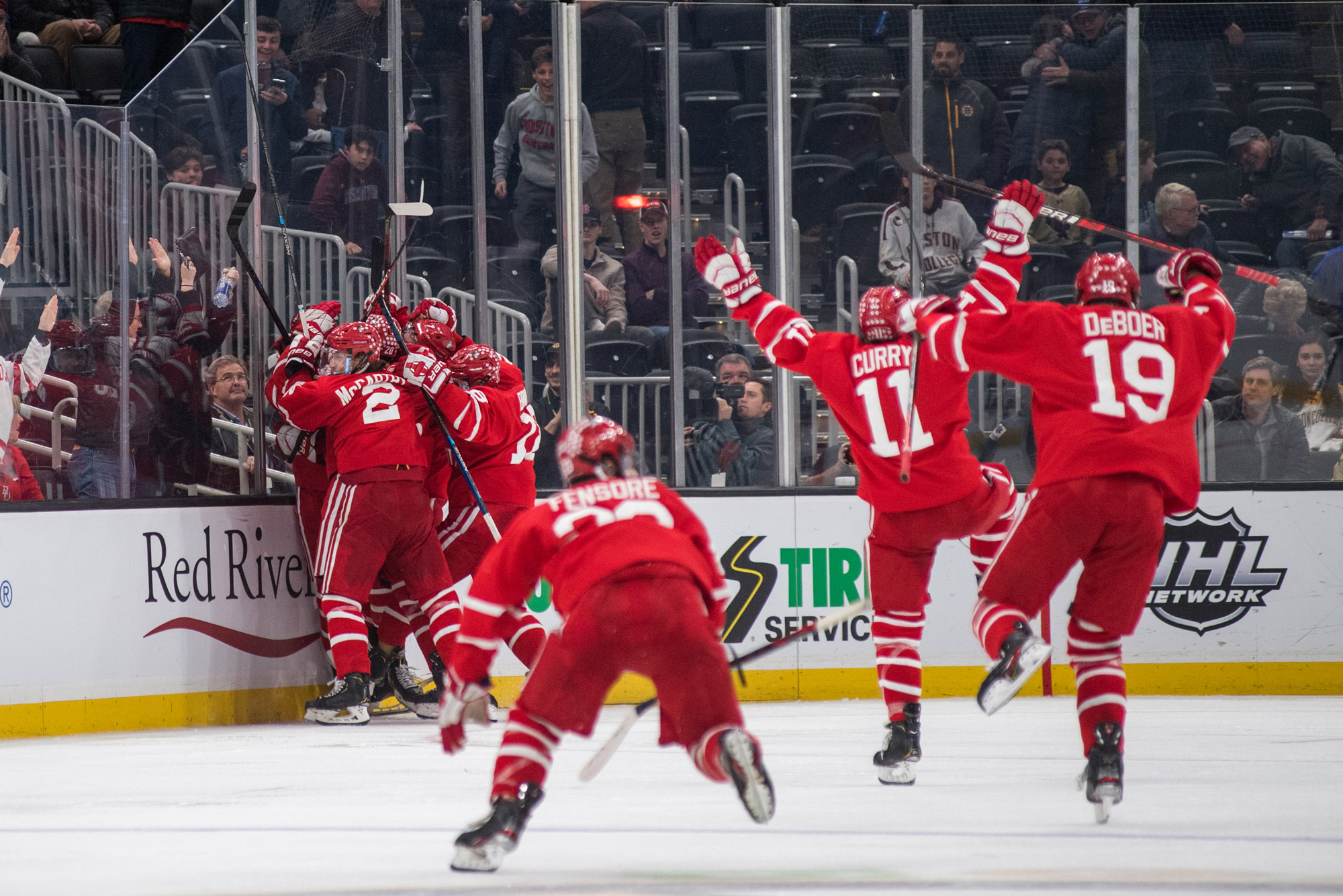 After a thrilling 5-4 double-overtime victory over BC in the Beanpot semifinal February 3, the BU men’s hockey Terriers play two-time defending champion Northeastern in Monday’s final at TD Garden. Photo by Cydney Scott

No one may be more qualified than Brian Durocher to speak on what a Beanpot sweep would mean to the Boston University athletic program.

For the 5th time in 42 years, both BU hockey teams (men’s and women’s) will skate in their Beanpot Tournament championship game in the same year—the men Monday night, the women Tuesday night. A victory for both, and both against Northeastern, would be a first. (The BU women and the Northeastern men are the defending Beanpot champions.)

Durocher (Wheelock’78), a four-year goalie as a BU undergrad, won two Beanpot titles as a player and seven as an assistant coach with the men’s program. Last year, as Terrier women’s head coach, he guided them to their first Beanpot title since they became a varsity program. This year marked his 300th win as coach of the BU team.

“It obviously would be a wonderful statement for the student-athletes that are a part of both teams,” says Durocher, who is in his 15th season as the women’s head coach. “If they could come up with that double, it would be something to be proud of now and for a long time to come.”

It certainly would mean something to the players.

“I think it would be pretty crazy,” says men’s team alternate captain Cam Crotty (Questrom’21). “A bunch of the women came to our game on Monday and supported us, and we went to their game on Tuesday. They were really great games; both teams played pretty well. I think if we each got that opportunity to bring it home, it would be something pretty special for this school and both teams.”

“We’re super supportive of each other and want us both to succeed,” says women’s team cocaptain Sammy Davis (CGS’17, Sargent’19, Wheelock 20). “I mean, it would be so much fun if we were both able to bring home a Beanpot.”

BU is in the title game for the fifth time in six years, but looking for its first trophy since 2015.

Patrick Curry (SHA’20): The Terrier captain leads the team with 15 goals and has 10 assists. He had one of each in the semifinal.

Trevor Zegras (CAS’23): Arguably the most highly touted pro prospect in the  tournament and a gifted playmaker, Zegras (8 goals, 19 assists) had an assist in the semifinal.

Tyler Madden: The team’s leading scorer, sophomore Madden (17 goals, 19 assists) has oodles of talent. He had an assist in the semifinal.

Zach Solow: Junior Solow scored the tying goal in the semifinal and is second on the team in scoring (12 goals, 15 assists). He scored against BU earlier this year.

“We’ve had great games against them in previous years—I think it just comes down to us being disciplined,” Crotty says. “It’s 100 percent about us. The coaches have said it before: it’s all about us. We don’t really care what team we’re playing, if we come and play our A game and our players are going the way they should, it’s really tough for us to lose games.”

The Huskies lead in this season’s series 3-0, yet two games were decided by just one score. Northeastern got past 10th-ranked Harvard 3-1 in the semifinal round.

Aerin Frankel: The junior netminder leads the country with a .959 save percentage and is tied for the nation’s lead in shutouts, with eight.

Alina Mueller: Sophomore Mueller (10 goals, 33 assists) is running away with the Hockey East scoring title. She’s had two goals and an assist against BU this season.

“They’re a fast hockey team,” Davis says. “They have a really good transition game. We need to be able to focus on that, working hard with the puck and without the puck. I think we’ll be good if we do that, stay on them, don’t let them get any oxygen. We’ll be good.”

The 68th Men’s Beanpot Tournament: The Terriers play in the championship game on Monday, February 10, at 7:30 pm, against defending champ Northeastern. Purchase tickets on Ticketmaster. All men’s Beanpot games are played at TD Garden, 100 Legends Way, Boston, and will be broadcast live on NESN or NESN+ and WTBU Radio.

The 42nd Women’s Beanpot Tournament: The defending champion Terriers play in the championship game on Tuesday, February 11, at 8 pm, against Northeastern. Purchase tickets on Ticketmaster. All women’s 2020 Beanpot games are played at Walter Brown Arena, 285 Babcock St., Boston, and will be broadcast live on NESN or NESN+ and WTBU Radio.

There are 2 comments on Will the Terriers Sweep the Beanpot for the First Time?

Will the Terriers Sweep the Beanpot for the First Time?
2
share this