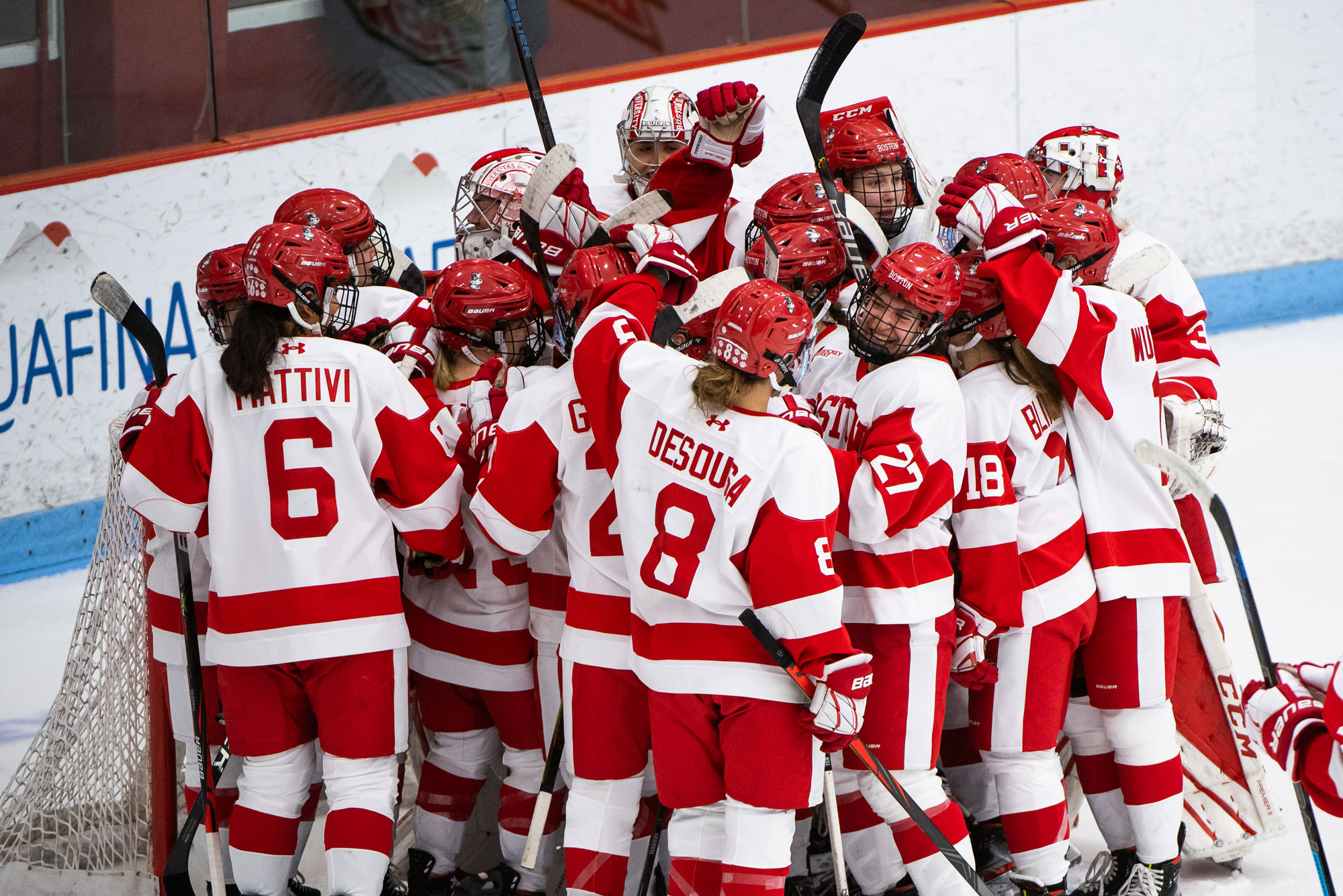 Abby Cook (CGS’18, Sargent’20) has a penchant for memorable Beanpot moments. One of her closest friends on the team, Jesse Compher (SHA’21), does too.

Cook’s first period goal in the semifinal game of the 42nd edition of the Women’s Beanpot Tournament went down as the winner, and Compher added a pair of third period goals as eighth-ranked Boston University cruised to a 4-0 Beanpot semifinal victory over Boston College on Tuesday night at Walter Brown Arena.

“We knew that we had to come out strong and they were going to be all over us, so we just had to stick to our game,” Cook says. “I think this shows that we’re good, and we just have to keep it up.”

Last year, Cook’s heroics, including two assists in the tournament’s championship game, helped propel BU to its first Beanpot title since 1981. Last night, Cook performed her due diligence early, and Compher followed as the Terriers (19-6-3, 13-6-3 Hockey East) now look for a title repeat in the 2020 Beanpot. BU will play third-ranked Northeastern, which took Harvard 2-1 in Tuesday’s earlier game, in the tournament championship next Tuesday, February 11, at Walter Brown Arena, starting at 8 pm.

“All in all, the kids stayed on the mark,” says Brian Durocher (Wheelock’78), BU head coach. “I’m excited about the four goals, but excited also that we defended well.”

BU got on the board first when Cook unleashed a one-timer rocket from the point. The blueliner’s eighth goal of the season came from a crisp passing sequence from Natasza Tarnowski (Sargent’20, CAS’20) to Sammy Davis (Sargent’19, Wheelock’20) to Cook at 6:19 of the first period.

BU added two third period insurance goals to silence the Eagles (14-11-3, 13-8-2 HE). The first came just 53 seconds into the third quarter when Compher found the back of the net. Assists went to Nara Elia (CAS’21) and Courtney Correia (CGS’20). Soon after, Compher added an unassisted tally at 3:18 of the third period, all but icing the Terriers’ spot in the tournament final.

“I’m going to be honest—I blacked out through them,” Compher says. “The first one, Nara Elia just put it on my tape. I didn’t have to do much work. The second one, I kinda just got a big rush of speed and saw some open net, so I thought, why not shoot it?”

Deziray De Sousa (Sargent’20, CAS’20) potted her eighth goal of the season, an empty netter from Kristina Schuler (Questrom’21) at 18:07 of the third period.

Compher is the team’s active career Beanpot scoring leader, with six points. Cook and Davis have five points apiece in their Beanpot careers.

The win came a day after the men’s ice hockey team beat BC 5-4 in double overtime to advance to the men’s Beanpot Tournament championship game, against Northeastern, at TD Garden on Monday, February 10, at 7:30 pm. BU is looking for a Beanpot sweep.

Terrier netminder Corinne Schroeder (Sargent’21) stopped 33 shots for her third shutout of the season to help the Terriers advance to the tournament final.

“They had good net front presence there,” Schroeder says. “My defense did a good job to clear them out of the way, or at least give me a sightline so that I could see the puck. They just did a great job in front of me.”

The 42nd Annual Women’s Beanpot Tournament: The Terriers play in the championship game on Tuesday, February 11, at 8 pm, against Northeastern. Harvard lost to the Huskies in the February 4 first game and will take on Boston College in next Tuesday’s consolation game at 5 pm. Purchase tickets on Ticketmaster. All women’s Beanpot games are played at Walter Brown Arena, 285 Babcock St., Boston, and will be broadcast live on NESN or NESN+ and WTBU Radio.