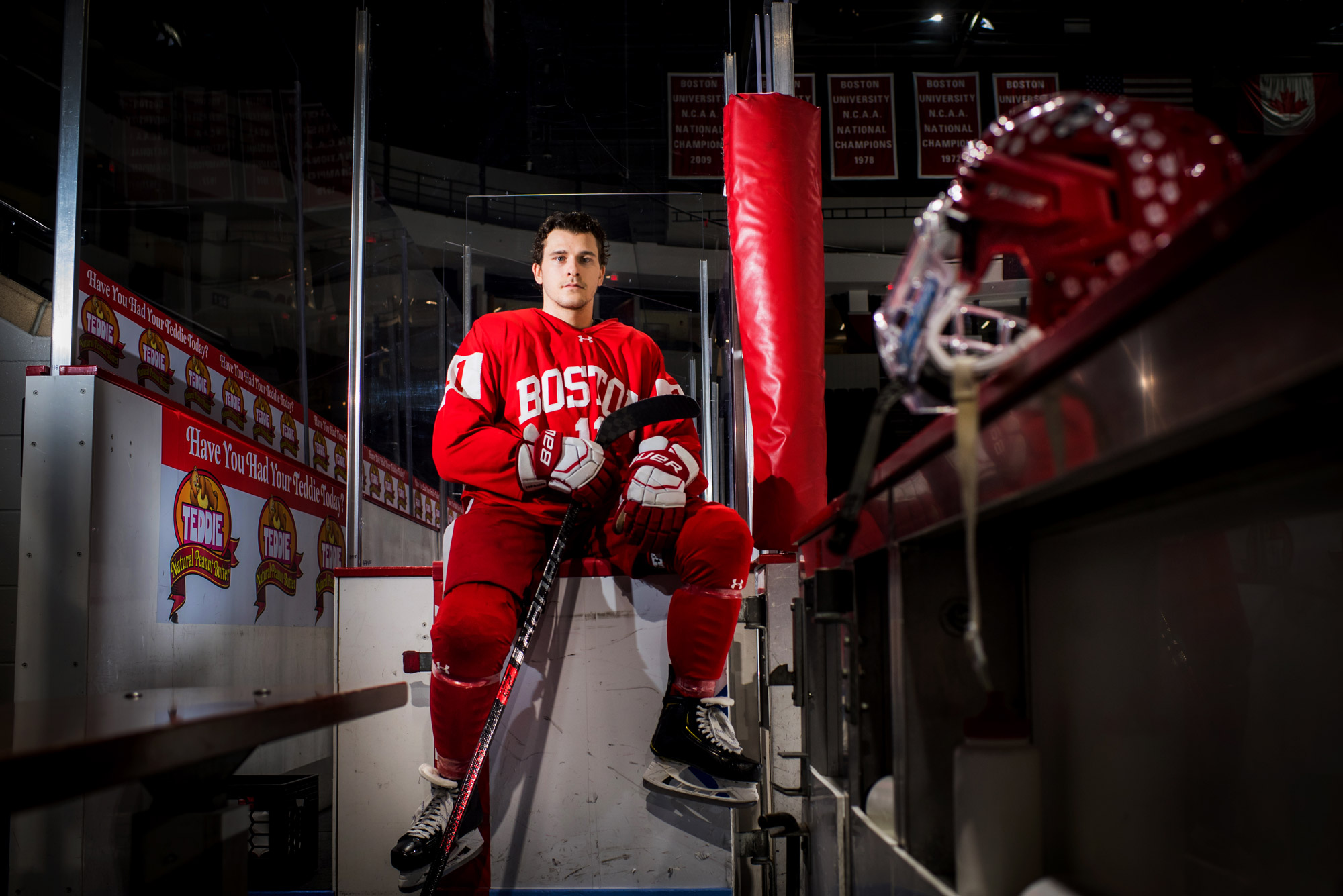 In the world of collegiate hockey, it’s not uncommon for the brightest stars to leave before graduation in pursuit of professional hockey careers. But Terrier men’s ice hockey captain Patrick Curry is an example of an alternate path.

Curry (SHA’20) has always wanted to be a pro hockey player, but it wasn’t looking so likely after his first two years. Now, in his final season, he’s sure it won’t be his last winter playing competitive hockey.

From a little-known forward freshman year to captain of one of the most respected teams in college hockey, Curry has built a résumé that’s surprised his coaches, and he expects to move on to the professional ranks after graduating this spring. His college career—from reserve to captain—is a case study in diligence, drive, and dedication.

“When I came on campus, I didn’t really expect I’d be in this situation now,” Curry says. “Just seeing all the great players who came before me and wore the ‘C,’ as well as some of the teammates that I’ve had in the past who were great captains, it’s something really special.

“You take a lot of pride in it, and I hold it really close to me.”

Over the last three-plus seasons, as 10 BU players ended their college hockey careers early to go to the pros, Curry remained, becoming a leader and developing on the ice.

The recently turned 24-year-old has a team-high 13 goals to go with 9 assists through this season’s first 23 games, on pace to smash last year’s career-high totals. While he didn’t get the same attention as many of his teammates when he entered BU, he’s carved out his own unique legacy, earning the respect of coaches and players alike.

“He’s gone way beyond what we thought,” head coach Albie O’Connell  (CAS’99) says. “We thought he’d be a very good, competitive, high-energy kid. We didn’t really know about leadership qualities. He was a good kid and liked by his teammates, but he’s grown into being a leader.”

Curry grew up in Schaumburg, Ill., and played youth hockey in the Chicago area and juniors for a year with the Tri-City Storm (Nebraska) and two seasons with the Bloomington Thunder (Illinois) of the United States Hockey League.

At BU, he had just 21 points in his first two seasons, mostly as a fourth or third liner. His class, ranked the top recruiting class in Hockey East in 2016, began with 10 players. Only Curry, Nico Lynch (COM’20), Gabriel Chabot (Questrom’19, MET’20), and Patrick Harper (COM’20) remain. From that original group, four are currently playing professionally, among them Arizona Coyotes forward Clayton Keller, who was a finalist for the Calder Memorial Trophy as an NHL rookie.

While Curry wasn’t a top-line player at the outset of his college career, at times he did show scoring potential. Harper, who is Curry’s roommate, remembers their first game on the road, at Boston College, when Curry scored his first goal. Harper watched from the bench, impressed.

“He came across the top of the circle, caught a pass, and made a sick catch and shoot,” Harper says. “It went far side in, and the boys were going nuts. It was a sick shot.”

But over those first two seasons, those moments didn’t come as often as Curry would have liked. He focused on doing the things necessary for victory, even when they don’t count statistically.

That career trajectory changed after former head coach David Quinn (CAS’89) left BU at the end of the 2017-2018 season to coach the NHL’s New York Rangers. Curry knew it was go-time, and also a chance for some redemptive play.

Over his first two seasons, he’d had just 7 goals and 14 assists. But working with O’Connell, promoted from assistant coach to lead the team, Curry flourished. With patience and poise, the Terrier forward had 13 goals and 13 assists last year, and this season has been his best yet.

I came in with the mindset that I was going to work hard and earn all of the ice time that I got because nothing was going to be given to me. To see how far I’ve come over the last four years has been pretty insane.

“It’s nice to see guys develop, keep getting better,” O’Connell says. “He’s gotten better every year productivity-wise, and with his maturity. The longer guys can stay, the better they’ll be, and the better the program is down the road.”

Harper says Curry has done all the right things to put himself in a position to succeed. “He works really hard and wants to get better every day, and that really resonates with the group,” Harper says. “When you have someone like that who does the right things day in and day out, the group really takes notice, and that’s just sort of the identity that’s formed within all of the guys in the room.”

Curry wants to play professional hockey when he graduates, a possibility that didn’t always seem likely.

“I always thought I’d be able to play professional hockey, but after my first couple of seasons, it didn’t look like I’d be starting at the higher end,” he says. “Now, it looks like I’ll probably be in the minors right underneath the NHL.”

Curry could well follow in the footsteps of last year’s captain, Bobo Carpenter (CGS’17, COM’19), who signed a professional deal with the New York Islanders organization after graduating last spring.

But before that, his goals are to help his class to its first Beanpot title (the 2020 Beanpot Tournament starts Monday, February 3—the Terriers last won the trophy in 2015), then to an at-large bid to the NCAA Tournament.

But he’s also taking the time to enjoy how far he’s come. “I came in with the mindset that I was going to work hard and earn all of the ice time I got because nothing was going to be given to me,” Curry says. “To see how far I’ve come over the four years has been pretty insane.”

The 68th Annual Men’s Beanpot Tournament begins Monday, February 3: BU plays BC in the second game of the semifinals at 8 pm, preceded by the Northeastern vs. Harvard game at 5 pm. The Beanpot second round is Monday, February 10: the consolation game is at 4:30 pm, followed by the championship game, between the winners of the two February 3 games, at 7:30 pm. Purchase tickets on Ticketmaster. All men’s Beanpot games are played at TD Garden, 100 Legends Way, Boston, and will be broadcast live on NESN or NESN+ and WTBU Radio (640 AM and 89.3 FM).