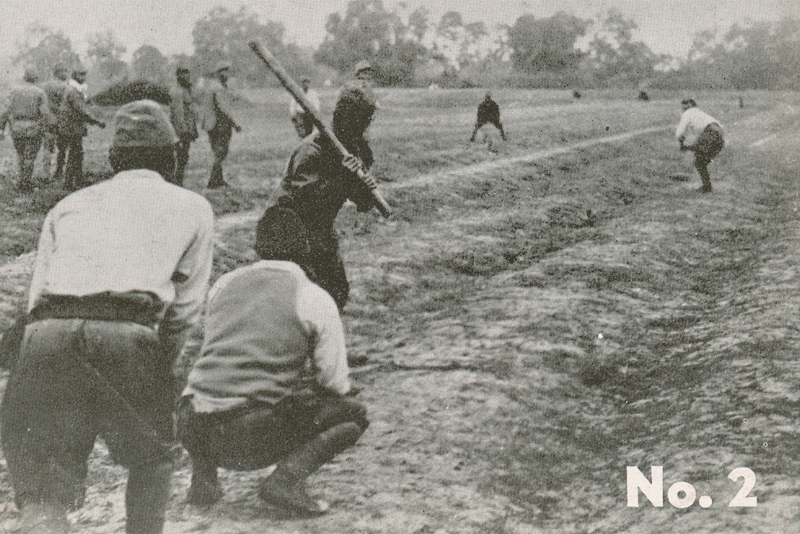 Japanese soldiers playing the American game of baseball supposedly in China during the war. The Japan Pacific Association, like several Japanese propaganda outlets, used baseball and other Western sports to show the similarities in American and Japanese cultures. Courtesy of CGS

In her new book, Japan’s “New Deal” for China: Propaganda Aimed at Americans before Pearl Harbor (Routledge, 2019), June Grasso, Boston University associate professor of social science, examines how Japan tried to influence American opinion in the years leading up to World War II. In the decade before Pearl Harbor, Japan was expanding its influence in Asia and sought to sway Americans’ opinion through propaganda that used distinctly American terms such as “New Deal,” “Manifest Destiny,” and “Open Door.” Grasso’s book explores original Japanese English-language propaganda from the 1920s and 1930s.

BU Research: Before World War II, Japan and the United States were in conflict regarding China. Japan invaded China in 1931 and was beginning to act on expansionist ambitions. The United States was concerned about continuing to trade with China and protect its access. Your book looks at the way Japanese institutions tried to influence American opinions and get America on its side. Why was this so important to Tokyo?

June Grasso: As Tokyo expanded its influence onto the Asian mainland during the early 20th century, it not only encroached on Chinese territory, but also challenged the economic and territorial interests of Western nations with spheres of influence in China. Japanese leaders understood the threat posed by their ambitions, especially after the US government refused to recognize the independence of Japan’s colony in China’s northeast, Manzhouguo, established in 1932. To avoid damaging, if not inevitable, international repercussions, the Japanese attempted to portray their aims for China as beneficial for Western nations like the US. Tokyo sought to secure its hold over Chinese territory, as it had in Korea, before it faced formidable military responses.

What’s an example of one propaganda piece that these institutions promoted in the US?

A common theme promoted in Japanese propaganda was that only Japan had the resources, technology, and ambition to fix the problems facing a troubled China, which was suffering from internecine warfare, extreme poverty, widespread opium use, and weak governmental institutions. Japanese propaganda claimed that whenever Japanese troops moved into an area, they brought peace, harmony, prosperity, and civilization. Ideas familiar to Americans, such as new deal, manifest destiny, and open door, were used to appeal to US interests.

What were they trying to accomplish through this propaganda?

Japanese institutions published propaganda for many international audiences. Its purposes included gaining support for its goal of creating a “co-prosperity sphere” where Japan, Korea, and China would be linked under Japanese dominion. Such a project threatened other imperialist nations.

Who was their audience for it? Was it ordinary, average Americans or was it leaders and lawmakers?

Propaganda targeted an educated audience, particularly those with business, academic, and/or cultural ties to Asia, so that members of these groups could influence US lawmakers. Also, there was an intense propaganda war starting in the late 1920s between American pro-Chinese and pro-Japanese interest groups.

As we all know, a few years later the United States and Japan were at war. Did the propaganda fail?

Yes. The administration of Franklin Roosevelt consistently distrusted Tokyo’s goals for China, but made ineffective efforts to thwart Japan’s moves during the Great Depression. American businesses carried on a brisk trade with Japan and Manzhouguo, selling manufactured goods to an active market. A turning point for FDR came in 1937 when Japanese planes sank an American gunboat, the USS Panay, as it moored near Nanjing, China’s capital at the time. Despite numerous official and unofficial apologies by the Japanese and full payment of indemnity, Americans began to be more openly critical of Japan’s war in China. On the other hand, US business leaders with ties to Japan continued to back Tokyo’s goals and remained convinced that American interests were better served with Japan, not China, as an ally.

What’s the most surprising or interesting discovery you made in researching the book?

Students of Chinese history view China’s two major political parties, the Nationalist (Guomindang) and the Communist Parties, and their leaders, Chiang Kaishek and Mao Zedong, respectively, as bitter enemies. Japanese propaganda claimed that both parties’ leaders colluded with the Soviets to facilitate the spread of communism into China, Korea, and elsewhere in Asia. The Japanese pointed to various alliances between the two parties that had Soviet backing and were aimed at halting Japan’s advances onto the Asian mainland. By the mid-1920s, Tokyo maintained that Japan was the only country with the ability to stop future Soviet influence over East Asia and therefore it deserved the West’s support. The accuracy of Japanese descriptions of Chinese internal politics may be questioned, but the predictions of communist domination over post-war Asia, if Japan’s ambitions for China failed, were accurate.

Another surprise was the emphasis on popular culture, such as travel, films, and especially sports, for propaganda purposes. The Japanese claimed that they were culturally more like Americans than the Chinese were and they invited tourists to enjoy the improvements in recreational facilities in areas under their control. They produced “friendship films” that depicted a modern, urban Japan. One of their film stars was nicknamed the Judy Garland of Asia. They pointed out their role in the spread of baseball to the Asian mainland and encouraged sports exchanges.

Are there any insights from your research that might apply to today’s news?

Japan’s conduct in China during the Second Sino-Japanese War (1937–1945) is being used by the Chinese government to encourage patriotism. In 2014, the Chinese Communist Party created three new national holidays that vilify the Japanese while commemorating China’s contributions to the Allies during World War II. Today each government disputes the other’s versions of events that happened decades ago. For example, the incident called “The Rape of Nanjing,” when Japanese troops occupied China’s capital city in 1937, raping and killing thousands, has been cited by the Chinese as a crime against humanity for which the Japanese must apologize. The Japanese have denied it happened and propaganda from the 1930s blamed Chinese “rabble” for the atrocities. Historical memory continues to impact Sino-Japanese relations in ways not seen among Western allies and enemies from World War II.

Long before Pearl Harbor, Japan Tried to Get America on Its Side

There is 1 comment on Long before Pearl Harbor, Japan Tried to Get America on Its Side

Long before Pearl Harbor, Japan Tried to Get America on Its Side
1
share this