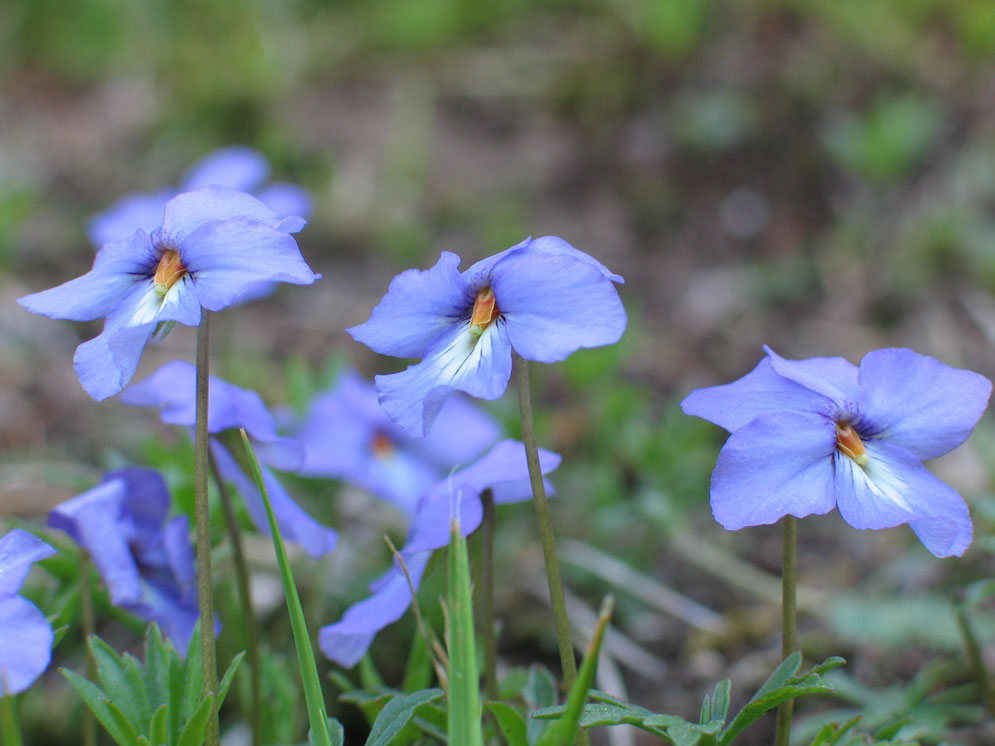 Many spring wildflowers, such as this bird’s-foot violet, are now leafing out and flowering one week earlier than they did 160 years ago. Photos by Richard B. Primack

Due to our warming climate, trees in North American forests are leafing out earlier and earlier each spring. For the wildflowers on the forest floor, searching for energy from the sun, all that extra shady foliage could end up causing a lot of harm.

How do we know? By glimpsing back into the 1850s with the help of a famous naturalist from the past. For 15 years, our research group at Boston University has been repeating Henry David Thoreau’s scientific observations of leafing and flowering times in his hometown of Concord, Massachusetts.

We’ve noticed that plants are leafing out earlier today than in Thoreau’s time, which is related to a warming climate caused by rising levels of atmospheric carbon dioxide. Due to human activities releasing carbon dioxide, temperatures have warmed by 4 degrees Fahrenheit over the past 150 years in Concord, which, like all of the southern New England region, has warmed up by twice as much as the global average.

Just how much earlier is foliage popping today than in the mid-1800s? Comparing our observations with Thoreau’s, we found that trees are now leafing out two weeks earlier than 160 years ago. In contrast, wildflowers are leafing out and flowering only about one week earlier.

We were very surprised by these results—we had assumed that events like flowering in wildflowers and leafing in trees would be triggered in the same way, at the same time, by the same spring temperatures. We hypothesize that trees respond faster to climate change because their branches are exposed to the warm spring air, whereas wildflowers lie dormant in the ground, which may take longer to thaw.

But as we realized that the rate of change in tree leaf out has been sprinting ahead of advancing wildflower flowering, we began to question how changes in tree leaf out might be affecting the wildflowers that grow beneath them on the forest floor.

Many New England woodland wildflowers—such as bluets, marsh marigolds, and bird’s-foot violets—have historically flowered several weeks before the trees leaf out. This period in the early spring, during which these wildflowers receive full sunlight unobstructed by tree foliage, is thought to be a critical time for them to photosynthesize and gain enough energy to flower, mature their fruits, grow, and produce flower buds for next year. However, as trees leaf out earlier, this crucial period of full sun is shrinking.

To find out how this would affect wildflowers’ energy reserves, which help them produce fruits in the summer and survive each winter, we brought our and Thoreau’s data to a research group that specializes in the energy budgets of forest plants; the group includes Mason Heberling, assistant curator of botany from the Carnegie Museum of Natural History in Pittsburgh, Susan Kalisz, professor of biology at the University of Tennessee, Knoxville, and Jason Fridley, associate professor of biology at Syracuse University. They develop models of wildflower energy budgets in an effort to understand how nonnative invasive plant species in the eastern United States outcompete native forest wildflowers.

Their analysis found that the energy reserves for most wildflowers have already declined from Thoreau’s time until now. Late-emerging spring wildflowers, such as jack-in-the-pulpit and wild ginger, are estimated to have experienced as much as a 26 percent decline in their annual energy reserves over the past 160 years, with as much as a 48 percent decline projected by the end of this century.

This loss of energy reserves means that many wildflower species may not have enough energy to mature their fruits and produce flower buds for the following year. They may also have trouble bouncing back from being nibbled at by insects, deer, or other herbivores. As a result, in the future we may see fewer wildflowers when we walk through our forests, fewer wild blueberries and raspberries for us to pick and eat in late summer, and less food for migratory birds to feed on before heading south for the winter.

“Combining our work with Thoreau’s data revealed an overlooked, yet critical, implication of how our changing climate is affecting native wildflowers beloved by so many people, right here at home,” says Mason.

Our work presents a novel look at what happens when plants change at different rates in response to our warming climate. Identifying these mismatches and tying them to climate change is challenging, and most research so far has focused on mismatches between predators and prey or between animals and plants, such as the relationship between insect pollinators and flowers. In contrast, our study is one of the first to investigate climate-related mismatches between two groups of plants—canopy trees and wildflowers on the forest floor. Our findings, published in Ecology Letters, reveal that we are only just scratching the surface in describing the many ecological relationships being disrupted by climate change.

This work was supported by the National Science Foundation. Richard B. Primack is a Boston University professor of biology. Caitlin McDonough MacKenzie earned a PhD in biology from BU in 2017, and is now a postdoctoral researcher at the University of Maine.