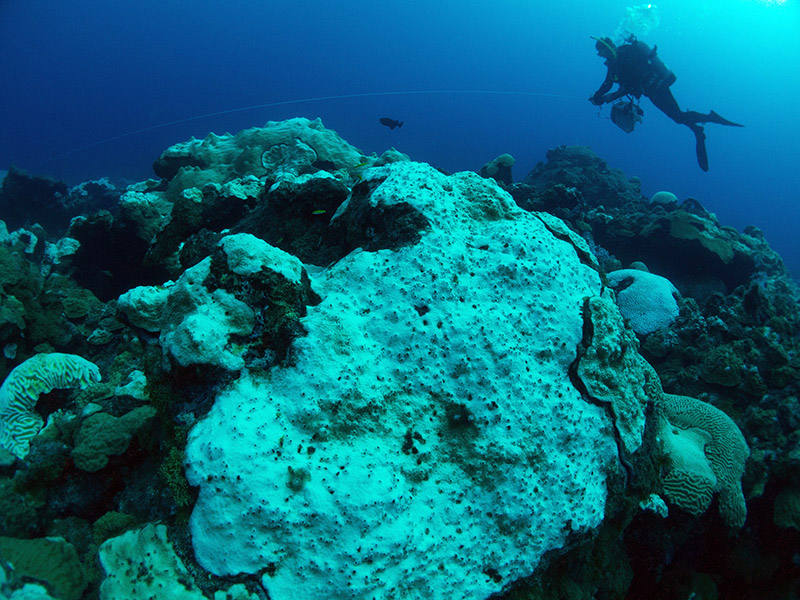 A diver reels in a line near a bleached colony of boulder star coral at East Flower Garden Bank. Photo courtesy of NOAA

On July 25, 2016, recreational divers at coral reefs near buoy 2 at the East Bank of Flower Garden Banks National Marine Sanctuary, 115 miles off the coast of Texas and Louisiana, noticed something strange. The coral, usually glowing with bright yellows and oranges, were pale. Colors were muted. Some were pure white. The water, normally clear at the reef’s depth of 70 feet, was cloudy. When the divers looked more closely, they saw that many of the reef’s urchins and mollusks had died. Other mobile animal species like lobsters and crabs were alive, but they had climbed to the very top of the coral colonies, as if they were trying to escape a toxic environment.

“There seemed to be a depth limit, where death stopped and everything above it was alive,” says Sarah Davies, a Boston University College of Arts & Sciences assistant professor of biology and coral expert, who later examined the scene. “Below that depth there was just this blanket of death. The coral appeared to be de-skinning; its tissue was falling off, and there was this gray mat of algae that we think was sulfur-oxidizing bacteria.”

The recreational divers reported the massive “die-off,” a large area of dying coral, to authorities at the marine sanctuary, whose researchers soon witnessed a dead zone unlike anything they had seen. The Flower Garden Banks National Marine Sanctuary is known to marine biologists for the extraordinary health of its coral, which stood in contrast to the ailing reefs throughout much of the world. As word spread, the sudden die-off in the East Bank alarmed coral researchers at universities and oceanographic institutes across the country. Less than a week after its discovery, Davies, along with several researchers from the Flower Garden Banks National Marine Sanctuary, boarded the R/V Manta in Galveston and headed to the reef.

What they found intrigued them. The dead zone covered six and a half acres, and in much of that area it damaged 70 percent of coral, yet the sanctuary’s West Bank, just 12 miles away, was unaffected. The usual culprits in mass coral mortality in the Gulf of Mexico—ship traffic and oil spills—were quickly ruled out. Davies and her colleagues collected coral samples from along the “lesion line” and above the lesion line (healthy part of the same colony) and took them back to the lab.

“We were investigating how all of the genes were responding at that moment,” she says. “It’s like blood draw or a temperature test to see how the coral feels.”

In fact, coral researchers like Davies can generally tell how a coral feels just by looking at it. If its coloration is bright, it’s thriving. If it’s white—“bleached,” as coral researchers say—it’s being starved of its primary food source and can die. That’s because coral gets its coloration from the same place it gets its nutrients: an alga called Symbiodinium, which literally lives inside the coral polyp’s body and feeds it nutrients produced through photosynthesis. It’s one of nature’s stranger symbiotic relationships. Algae is a plant. The coral polyp is an animal, one that turns calcium carbonate in seawater into hard skeletons, which pile up by the millions to form reefs on oceans around the world. So corals are a combination of plants, animals, and rocks, none of which would be there without the other two.

Coral reefs, which provide habitats for thousands of forms of marine life and protect shorelines from high seas, have endured centuries of battering from commercial fishing operations. Now, aided by a collaborative National Science Foundation RAPID grant and an Early-Career Research Fellowship from the Gulf Research Program of the National Academy of Sciences, Davies is trying to measure the risks to coral that are posed by climate change and specific weather-related events, like hurricanes.

In February 2017, seven months after the mysterious East Bank die-off, Davies and about 40 other researchers—chemists, biologists, microbiologists, and physical oceanographers—came together in Galveston to share their research of the event, and present their theories about its cause.

“We all came up with the same general hypothesis,” says Davies. “But the mechanisms were a little different.”

The general consensus pinned the deadly event on a “hypoxic episode,” a drastic drop in oxygen in the water that allowed sulfur-oxidizing bacteria to colonize. “It probably happened within hours,” says Davies. “It was very short. My personal opinion of how it happened is we will never know, but there had been a huge amount of flooding in Texas in the season prior to the die-off.”

Three months previous to the discovery of the die-off, to be precise, heavy rains dropped 16 inches of water on Houston in just 12 hours. The event, known as the Tax Day Floods, because it happened on April 17 and 18, swelled the rivers of southeast Texas. The rivers overflowed their banks and carried enormous amounts of sediment into the Gulf of Mexico. This flooding, coupled with unusually high rainfall, eventually caused stratification in the waters above the East Bank.

“When that happens in conjunction with a warm summer, you have a situation with warm freshwater on the surface,” says Davies. “We think that these warm waters, combined with nitrogen-rich freshwater runoff, could have caused a plankton bloom. Then when these plankton die they sink and this dead matter sits on top of the stratified water layer, eventually creating an anoxic (low DO, or dissolved oxygen) zone. There is evidence that there was low DO in the water near the East Bank at the time of the die-off.”

One researcher at the Galveston symposium suggested that a layer of hazy freshwater near the surface, caused by heavy rainfall, could have blocked sunlight and hindered the photosynthesis, ultimately killing the phytoplankton and reducing oxygen. Another thought the oxygen could have been depleted by the decomposition of organic matter swept into the sea by the floods. A third pointed out that water temperatures, both on the surface and at the bottom, were the highest ever recorded, possibly stressing the corals and leaving them susceptible to other threats. Ultimately, the researchers would conclude that they could find no smoking gun.

Six months later, while the coral scientists were still pondering possible causes of the East Flower Garden Bank die-off, another weather event provided an opportunity to put the storm runoff theory to a test. Over a four-day period in August 2017, Hurricane Harvey dumped 60 inches of rain over much of eastern Texas. For millions of people, Harvey was a life-threatening terror, but for a few dozen coral scientists, it was a chance to learn if tropical storms were one more thing that put coral reefs at risk. Several researchers even raced to the Flower Garden Banks as Harvey was approaching the Texas coast, to take samples that could establish a baseline for future data.

In October, two months post Harvey, researchers returned to the Flower Garden to search for bleaching and other signs of die-off similar to those that followed the Tax Day Floods. Davies had to miss that trip, but she was the lead benthic scientist on a second trip in July 2018. Davies says data are sufficient to answer the Harvey question. The hurricane, she says, did not damage the coral reefs, and she thinks she knows why.

“The storm in 2016 was the perfect storm,” she says. “What caused the August 2016 die-off was strong water column stratification, and stratification is exactly what doesn’t happen during a hurricane. A hurricane mixes everything up, which is the opposite of stratification. The Flower Garden Banks seem to have been buffered from the effects from Harvey. They are doing great.”

Elsewhere, however, Davies’ research findings are less encouraging. Another, longer-term project involving coral reefs in the Florida Keys is revealing widespread and ongoing die-off. That project, which she started to work on as a postdoc at the University of North Carolina and which is funded by the National Science Foundation, also examines the reefs’ response to rising sea temperatures, and compares the health of reefs close to shore to the health of those farther offshore. Over the past three years, Davies, working with UNC researchers, has taken hundreds of cores from two coral species off the coasts of Florida, Belize, and Panama, compared their microbiomes, and noted differences from across reef zones and between species.

Despite all of that data, drawing conclusions has been difficult. For example, in the wake of Hurricane Irma, the research group found nearly 100 percent mortality on offshore reefs in Florida, and much less death on the inshore reefs, even though inshore reefs faced massive inflows of heavily nitrated freshwater. Davies finds that strange, and she suspects that most of the offshore mortality resulted not from Irma, but from disease.

“Disease is a big problem in the Caribbean,” she says, and we know almost nothing about it. We are calling it the “white plague,” because the tissue just sloughs off, and we think it’s climate related. Scripps [Scripps Institute of Oceanography] has been documenting water temperatures for over 100 years, and just this week it documented the warmest temperature on record. Ever! We think that’s one of multiple stressors. We are observing the symbiosis between algae and coral is becoming more difficult to maintain, but we don’t know why.”

The good news, says Davies, is that some coral species, and individuals within a species as well as certain sites, appear to be fine. There are winners, and there are losers. Why? That’s another thing that Davies and her colleagues hope to find out.

Inside the Search for a Coral Killer

Inside the Search for a Coral Killer
6
share this