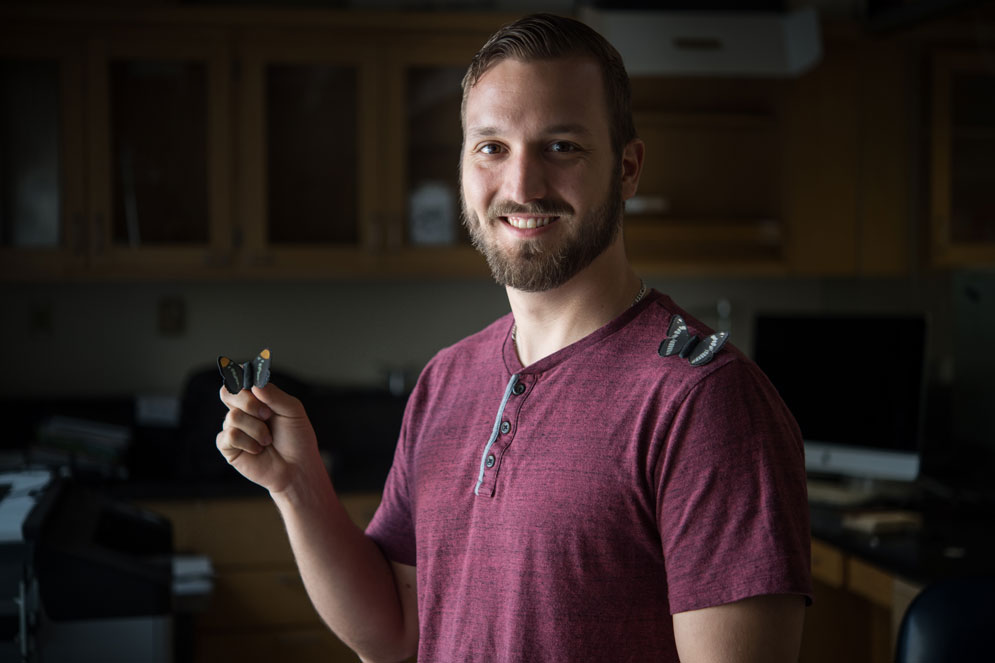 He spent over a decade tromping through jungle muck, and his close study of butterflies, in particular, led to an intriguing finding. He noted that distantly related species of butterfly often looked quite similar to one another, and that sometimes “palatable” butterflies—those that birds like to eat—bore the bright-colored spots of their bad-tasting cousins. The palatable butterflies had apparently evolved a disguise, intended to trick predators into thinking that they were toxic. This concept—animals imitating one another for an evolutionary advantage—became known as Batesian mimicry.

Today scientists know that Batesian mimicry exists in many animals, from frogs and snakes to birds and bees, and, of course, butterflies. And now a team of Boston University biologists (and butterfly experts), led by associate professor of biology Sean Mullen and PhD candidate Evan Kristiansen (GRS’20), are using their understanding of this fundamental evolutionary mechanism, along with modern genetics techniques, to answer one of the biggest, most basic questions in biology: How do new species form?

Their first step toward answering that question is a study published on May 31, 2018, in the journal Evolution, in which Kristiansen, Mullen, and postdoctoral fellow Susan Finkbeiner studied mimicry in a pair of butterflies—one toxic, one tasty—that look alike but are only distantly related. The toxic butterfly, or “model,” is Adelpha californica, commonly known as the California sister. The mimic, which tastes fine and is harmless to birds but sports bright red-orange spots that make it look like the toxic model, is Limenitis lorquini, or Lorquin’s admiral.

“Butterflies have really conspicuous traits that you can use for your research,” says Kristiansen, whose work is funded by the National Science Foundation. “Where some organisms’ traits are a little harder to see, with butterflies they’re really obvious, big color blotches, which makes our job a little bit easier.”

The scientists’ ultimate goal is to learn how Batesian mimicry works on a genetic level. They suspect that the mimic’s appearance protects it so well that it outcompetes its (nonmimetic) sister species everywhere that the toxic model occurs, resulting in distinct geographic ranges and ultimately speciation. The scientists think that selection for a particular trait—in this case, the red-orange spots—might limit the flow of genes between Lorquin’s admiral and its sister species, therefore driving evolution.

The first step in this research was to test Batesian mimicry in the field, to make sure that evolutionary mechanism was at play among these butterflies. “Batesian mimicry makes a couple of predictions that we can test directly,” says Mullen. The predictions are fairly logical: the model should be unpalatable or “defended”—basically, avoided by predators—wherever it occurs; the mimic should be protected from attack where the model occurs because the predators mistake it for the model; that protection should break down outside of the geographic range of the model, because the birds don’t know what the toxic model looks like, and therefore aren’t averse to the mimic; and the more common the model (defended) species is, the stronger the protection for the mimic.

To test these predictions, Kristiansen needed to place facsimiles of model, mimic, and control butterflies in the field—a wilderness area near Lake Tahoe called Yuba Pass—and record bird attacks. So he built 3,600 fake ones out of paper, plasticine, and twist ties. “Model studies are a tried-and-true method in animal attack research,” he says. “The problem is, we’re trying to trick birds; we’re not just trying to trick us. We look at something that comes off of a laser printer, and to our eyes it looks really real, but to birds’ eyes, with all of their UV-sensitive cones, it looks totally different.”

To build butterflies that could fool birds, and also serve his scientific purposes, Kristiansen printed wings on a special paper that reflects UV light in a way that mimics actual butterfly wings—a method pioneered by co–first author Finkbeiner—using a spectrometer to make sure he got it right. Depending on the butterfly, he colored some of the wings’ white patches with Crayola crayons, which don’t reflect UV light. Then he mounted the wings on card stock, dipped them in wax to hold them together, and attached them to a “body” made of black plasticine. The plasticine was the same type used for the animated Wallace and Gromit figures, which was designed to withstand the heat of studio lights and so wouldn’t melt in the California sun.

He made 900 California sisters and 900 Lorquin’s admirals, as well as 900 Weidemeyer’s admirals and 900 common buckeyes to use as controls. Eventually he was able to make a butterfly, start to finish, in five minutes. “At one point he was using a drill to add holes to hundreds of them in a single night,” says Mullen. “He was just up in the garage, drilling all these poor models and putting them all together.”

“What constantly surprises me about scientific research,” says Kristiansen, “is how many esoteric skills you can combine into one project.”

Kristiansen and his colleagues took their fake butterflies to the California sister’s home turf, and set them out in groups of 20, attaching them to bushes and branches with twist ties. The team checked them at regular intervals for evidence of bird attack—a triangular, beak-shaped bite in the body. Then they repeated the experiment at a site in Idaho, where the California sister doesn’t live.

In the California study area, where the model butterfly is very common, the scientists found that Batesian mimicry worked as predicted: birds attacked the model and the mimic less often than they attacked either control. And in the Idaho site, where the model is usually absent, birds attacked the mimics and controls at about the same rate, as expected. “Surprisingly, we found that the model was actually still attacked less often than we would have expected by chance,” says Mullen. He suspects that birds were deterred by the model butterfly’s markings, or migrating birds recognized it from elsewhere.

Having confirmed that Batesian mimicry is indeed at work with these butterflies, the scientists are now moving on to the genetic portion of work. Kristiansen is creating a genetic linkage map to identify the region of the genome that’s responsible for the presence or absence, and the extent, of the distinctive red spot. He’s also sequencing the entire genome of 10 of each species, as well as 20 individuals from a hybrid zone between the two species. “Once we know where in the genome to look, we’ll be able to look for the exact genetic variation that controls the presence or absence of the trait,” says Mullen. “And then the last step will be to demonstrate that in fact natural selection can reduce gene flow between populations, and promote speciation, by acting on this trait in the genome.”

Understanding the gene flow of these small traits in butterflies may deepen our understanding of the evolutionary diversity at large, and help answer some questions about how we came to be.

“As humans, we’re interested in how we got here,” says Kristiansen. “When you think about the speciation process with us and Neanderthals, or with us and Australopithecus, what was that process? What led to those events, I think, is a very interesting question. And answering these incremental questions about how evolution works at the small scale might give us the opportunity to answer some of these larger questions.”

Seeking Clues to Natural Selection in Butterfly Wings
0
share this