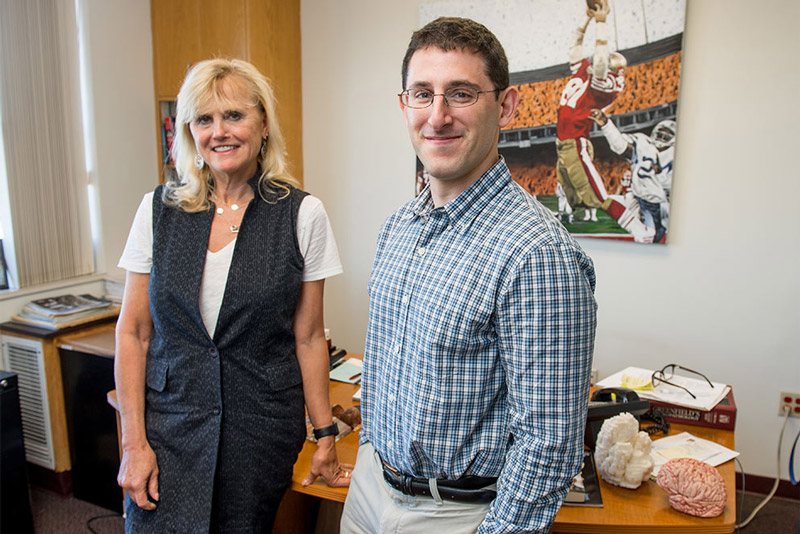 Ann McKee (left), director of BU’s CTE Center, and Jonathan Cherry, a BU School of Medicine postdoctoral fellow, have written a study, published September 26, 2017, reporting that a new chronic traumatic encephalopathy biomarker has been discovered that could potentially allow diagnosis of the disease during life. Photo by Cydney Scott

Chronic traumatic encephalopathy (CTE), a progressive degenerative brain disease found in people with a history of repeated head trauma, can currently be detected only after death, through an autopsy. Absent being able to diagnose the disease in living patients, researchers cannot develop treatments for CTE.

In the past several years, scientists have taken small steps forward in identifying possible biomarkers for the disease, and now researchers from the Boston University School of Medicine (MED) and the VA Boston Healthcare System (VABHS) have discovered a new biomarker that may potentially allow the disease to be diagnosed in the living.

In a study published on September 26, 2017, in the journal PLOS ONE, the researchers found that the biomarker, the protein CCL11, might also help distinguish CTE from Alzheimer’s disease, which often presents with symptoms similar to CTE and also can be definitively diagnosed only postmortem. The ability to diagnose CTE in the living would allow not only for the development of possible therapies to treat the disease but also for research into prevention.

“This is a step forward from our knowledge gained in understanding CTE from brain donations,” says study senior author Ann McKee, a MED professor of neurology and pathology, director of BU’s CTE Center, and chief of neuropathology at VABHS. “It’s a hopeful step. The whole point is to understand as much as we can from the individuals who’ve fallen, so we can apply it to our future veterans and athletes.”

The new research “offers a possible mechanism for distinguishing between CTE and other diseases,” says study first author Jonathan Cherry, a MED postdoctoral fellow in neurology. “By making it possible to distinguish between normal individuals and individuals with Alzheimer’s disease, CTE therapies can become more targeted and hopefully more effective.”

Cherry and the other researchers studied the brains of 23 former college and professional football players. They compared them to the brains of 50 nonathletes with Alzheimer’s disease and 18 nonathlete controls.

They found baseline levels of CCL11 in the brains of the nonathlete controls and the nonathletes with Alzheimer’s disease, but the CCL11 levels were significantly elevated in the brains of people with CTE. They then compared the degree of elevation of CCL11 to the number of years those people played football and found that there was a positive correlation between the CCL11 levels and the number of years played.

Additional studies are needed, the study authors say, to determine whether increased levels of CCL11 occur early or late in the CTE disease process, and whether CCL11 levels might be able to predict the severity of a person’s disease.

“What’s most likely going to happen is that we’ll end up with a panel of biomarkers—maybe three or four—that will let us diagnose CTE reliably,” Cherry says.