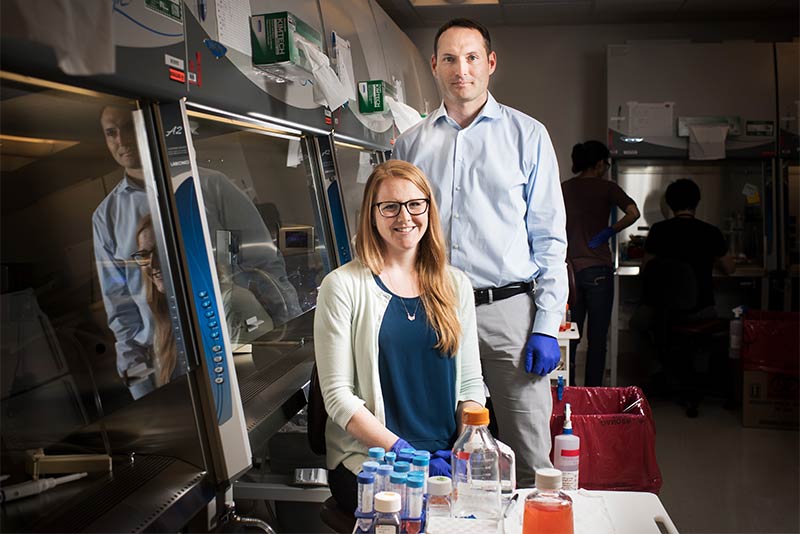 Human lungs, like all organs, begin their existence as clumps of undifferentiated stem cells. But in a matter of months, the cells get organized. They gather together, branch and bud, some forming airways and others alveoli, the delicate sacs where our bodies exchange oxygen for carbon dioxide. The end result, ideally: two healthy, breathing lungs.

For years, scientists who study lung diseases like cystic fibrosis have tried to track this process in detail, from start to finish, in the hope that understanding how lungs form normally may help explain how things go wrong. Now, scientists at Boston University’s Center for Regenerative Medicine (CReM) have announced two major findings that further our understanding of this process: the ability to grow and purify the earliest lung progenitors that emerge from human stem cells, and the ability to differentiate these cells into tiny “bronchospheres” that model cystic fibrosis. Researchers hope that the results, published separately in the Journal of Clinical Investigation and Cell Stem Cell, will lead to new, “personalized medicine” approaches to treating lung disease.

“Sorting these cells to purity is really difficult and important,” says Darrell Kotton, director of CReM and co-senior author of both papers, with Brian Davis of UTHealth at the University of Texas. “It’s the first step in trying to predict how an individual might respond to existing treatments or new drugs.”

“There’s a long list of lung diseases for which there are no treatments other than a lung transplant,” added Kotton, whose work is funded by the National Institutes of Health (NIH), the Cystic Fibrosis Foundation, and the Massachusetts Life Sciences Center. “It’s critically important to develop new tools for understanding these diseases.” 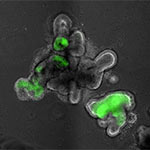 CReM scientists work with induced pluripotent stem cells, or iPSCs, which were discovered by Shinya Yamanaka in 2006. Yamanaka figured out how to take an adult cell in the human body—like a blood cell or skin cell—and “reprogram” it into a stem cell with the ability to grow into any organ. In recent years, several groups of scientists have grown lung cells from human iPSCs, but the recipes aren’t perfect—the resulting lung cells grow amidst a jumble of liver cells, intestinal cells, and other tissues.

“That’s a big issue,” says Finn Hawkins, a BU School of Medicine (MED) assistant professor of medicine and part of the CReM team. Hawkins is co-first author on the Journal of Clinical Investigation paper, along with Philipp Kramer, formerly of UTHealth. “If you want to use these cells to study the lung, you need to get rid of those others.”

First, Hawkins needed a way to identify the lung cells. Previous work by Kotton and other CReM scientists demonstrated that mouse stem cells express a gene called Nkx2-1 at the “fate decision”—the moment they turn into lung cells. “That’s the first gene that comes on that says, ‘I’m a lung cell,’” says Hawkins. Kotton built a reporter gene that glowed green when the stem cells first expressed Nkx2-1, and Hawkins engineered the same gene into human cells. Now, he could easily spot and purify the glowing green lung cells.

Using a flow cytometer, Hawkins and his colleagues separated the green cells out from the mix, then grew them in a matrix. The result: tiny green spheres about half a millimeter across, “a population of pure, early lung cells,” says Hawkins. The team calls the tiny spheres “organoids,” simplified and miniaturized versions of an organ, containing key types of lung cells. The organoids are tools, and they serve at least two important purposes. First, they allow scientists to study, in detail, a critical juncture in human lung development about which very little is known. “We discovered that many of the genes that control lung development in other species, such as mice, are also expressed in these human cells,” says Hawkins.

The organoids serve another purpose as well: scientists can grow them into more mature, specific cell types—like airway cells or alveolar cells—that are critical for lung function. “Now we can actually start looking at disease,” says Hawkins. That’s where Katherine McCauley (MED’17), a fifth-year PhD candidate at CReM, enters the picture. 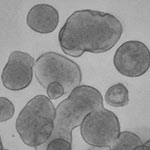 McCauley’s interest is cystic fibrosis, a disease caused by mutations in a single gene, CFTR. The mutation causes a person’s lungs to produce a thick, viscous mucus that leads to infection, inflammation, and, eventually, lung failure. For many patients, there is no cure.

McCauley, looking at the earliest stages of the disease, wanted to take Hawkins’ purified lung cells to the next step and figure out how they became airway cells. Through many painstaking experiments, she zeroed in on a signaling pathway called Wnt, known to be important in mouse lung development. By turning the pathway off, she guided the immature lung cells into becoming airway cells. Then, she grew them into tiny balls of cells, which she called “bronchospheres.”

Like Hawkins’ organoids, the bronchospheres don’t act like a bronchus; they are simply a collection of specific cells. But their specificity makes them exquisitely useful. “We wanted to see if we could use these to study airway diseases,” says McCauley. “That’s one of the big goals: to engineer these cells from patients and then use them to study those patients’ diseases.”

As a proof of concept, McCauley obtained two cell lines from a patient with cystic fibrosis, one in which the CFTR mutation that caused the disease had been corrected, and one in which it hadn’t, and grew them into bronchospheres. To see if her recipe worked, she ran a test, applying a drug that should cause spheres made of normal, functioning cells to fill with fluid. It worked: the “fixed” bronchospheres began to swell, while the cystic fibrosis spheres didn’t react. “The cool part is that we measured this using high-throughput microscopy, and then we calculated the change in area with time,” says McCauley, who published these results in Cell Stem Cell and is lead author on the study. “So now we can evaluate CFTR function in a quantitative way.”

The next step, says McCauley, is to improve the test, and scale it up, and create similar tests for other lung diseases. “The end goal is to take cells from a patient, and then screen different combinations of drugs,” she says. “The idea that we could take a patient’s cells and test not twenty, but hundreds or thousands of drugs, and actually understand how the patient was going to respond before we even give them the treatment, is just an incredible idea.”