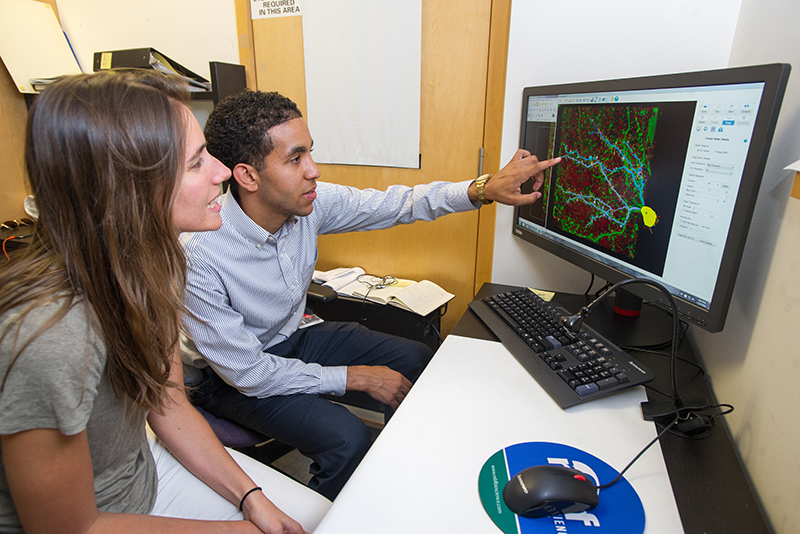 Denston Carey, Jr., an arts and sciences major at West Chester University of Pennsylvania, works with his grad student mentor, Teresa Guillamon-Vivancos (MED’17), in the neuroscience lab of Jennifer Luebke (MED’90), a MED associate professor, as part of the STaRS program.

Marissa Baccas says she is a shy person, not a fan of public speaking, but get her talking about the Boston University School of Medicine (MED) STaRS program, and she has plenty to say.

“When I first got to the lab, I felt out of place,” says Baccas, a rising senior majoring in chemistry at Fayetteville State University. “This is all new stuff to me here, it’s all DNA and PCR [polymerase chain reaction]. As time went by, I read papers, asked questions, watched when they were performing experiments. I learned a lot. Now I’m doing work on my own in the lab.”

STaRS (Summer Training as Research Scholars) is a 10-week summer program that brings together rising juniors and seniors from underrepresented minorities at colleges all over the United States to do biomedical research in BU Medical Campus labs. Most students plan to apply to PhD, MD, or, especially, MD/PhD programs. The program also supports first- or second-year MED students from underrepresented minorities seeking more lab experience—six of them in summer 2016.

Baccas wants to go to medical school to become a neonatologist and medical researcher. Her STaRS project explores the way certain proteins affect cardiac marker genes in mice, as part of the larger research program in the lab of Isabel Dominguez, a MED assistant professor of medicine. It’s the kind of project that Baccas would not get as an undergraduate at Fayetteville.

Which is the point of STaRS: it accepts people from different schools so they can experience better, higher, more advanced research.

The STaRS experience was ideal for Baccas, says Dominguez, given her career goals. It exposed her to embryonic development and taught her molecular biology techniques that she will need in her career toolbox.

It has also been good for her personally. “She has opened up so much,” Dominguez says. “She’s joking and interacting with people in the laboratory, and she’s asking questions and volunteering information. She’s gained confidence in herself.”

The program, which started in 2010, is currently funded by a $750,000 five-year grant from the National Heart, Lung, and Blood Institute of the National Institutes of Health. It is run through MED’s Division of Graduate Medical Sciences. The undergraduates in the program receive a $4,800 stipend, campus housing, and travel expenses. Medical students get $9,060, but no housing. Each of their labs receives $1,000 to cover supplies and other lab expenses.

“These are students that are not only doing well in college, but also have a drive to excel in whatever they are doing,” says STaRS director Maria Ramirez, a MED associate professor of medicine and assistant dean of diversity and multicultural affairs

This year, the program has 19 students: 10 undergraduates from schools ranging from Brown and Duke to lesser-known institutions such as West Chester University of Pennsylvania and Tougaloo College, 3 undergrads supported by their home institutions, and the 6 MED students.

Each student is assigned to a lab that aligns with his or her own interests and is mentored by a faculty member. They get a basic grounding in the lab environment from a grad student or a postdoc supervisor, then move on to their own research projects.

The students all take part in a journal club, where they discuss their lab experiences, and they present their final work at a symposium. They will also present their work at the national Annual Biomedical Research Conference for Minority Students in Tampa, Florida, in November 2016.

“I’m interested in being a physician and possibly a physician-scientist,” says Denston Carey, Jr., a rising senior at West Chester majoring in cell and molecular biology. Carey is studying neurons in the barrel cortex of mice, the part of the brain that plays a role in whisker sensation. It’s part of the research of PhD candidate Teresa Guillamon-Vivancos (MED’17), Carey’s lab mentor.

Both are supervised by Jennifer Luebke (MED’90), a MED associate professor and vice chair of anatomy and neurobiology. On a practical level, says Luebke, Carey is tackling a labor-intensive part of Guillamon-Vivancos’ project, which has to be done quickly. Because he’s a fast learner, he has made a substantial contribution, she says. And then, in part because he’s the youngest person in the lab, he brings intangible benefits: a certain energy and enthusiasm and his own individual perspective. “We all learn from each other, and that’s always a good thing,” Luebke says.

For many of the undergraduates, it is their first exposure to the cutting-edge technology and collaborative experience at a place like the Medical Campus.

“I think it gives them a different idea: ‘I can leave home, I can be successful, I can go to school here,’ versus staying in an area where they’re comfortable,” says program administrator Lynese Wallace (CGS’09, SAR’11, SPH’17). “It gives them confidence, to say, ‘I can do something new that might be a little scary at first, but overcome whatever challenges might come with that and be successful.’”

The MED students started and finished their STaRS time a little early to accommodate their fall semester class schedules. Joanna Ortega (MED’19) used antibody strains to test for correction of a gene in the liver, hoping to learn if gene-splicing efforts had worked. She decided to enter the program to get a research background that she did not get as an undergrad at the University of the Incarnate Word.

The students also improve in areas such as creating a presentation and public speaking, with the help of workshops run through StaRS. “I saw a lot of developmental workshops I felt would help me in my future. I really wanted a stronger sense of how to present well, which is going to be a useful skill,” Ortega says.

“I come from a state school, so I haven’t really had the opportunity to be involved with a research lab that’s really doing things that are going to make a difference,” Carey says.

“It’s like a whole new world that opened up to me.”

STaRS: Getting an Early Start on Life in the Lab

STaRS: Getting an Early Start on Life in the Lab
1
share this