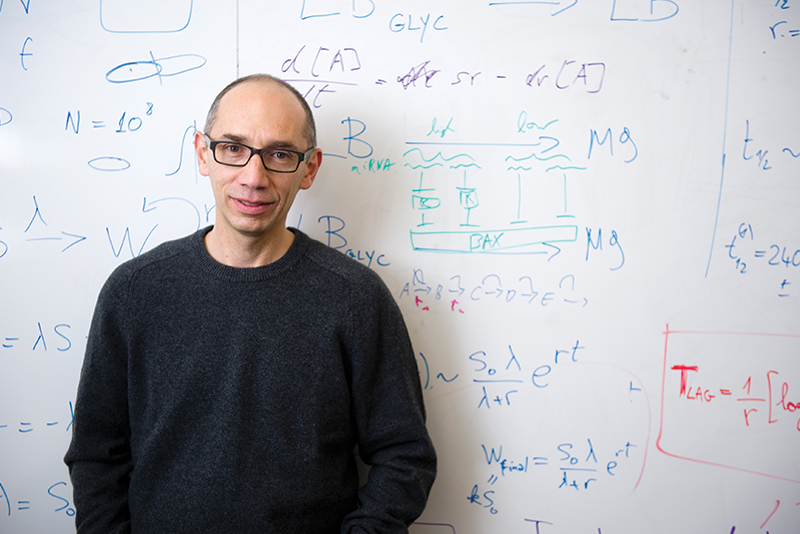 Daniel Segrè studies very unusual microbes. They don’t live in petri dishes, guts, or on dirty kitchen countertops. In fact, they don’t live in the real world at all. They live in a simulated world on Segrè’s computer.

Genetically identical to their living counterparts, these digital organisms look like a bunch of red, blue, and green blobs on a computer screen, and they feed on virtual nutrients, grow, excrete waste, and die just as they would in the real world. Segrè also works with living microbes, but the advantage of virtual organisms is that he can monitor how nutrients and energy flow among species—something that’s difficult to do in the real world.

Segrè, an associate professor of bioinformatics at Boston University, says that the ability to mathematically model the underlying behavior of these communities could ultimately help scientists understand not only existing microbial ecosystems but also engineer new ones to fight antibiotic-resistant pathogens or develop new drugs.

In summer 2014, Segrè received a $1.4 million grant from the Department of Energy to model the ways communities of microbes could transform plant matter into a kind of oily biodiesel fuel. Other scientists have been trying to do the same thing using single organisms, Segrè says, but they haven’t had much success. Making biofuel requires breaking down plant matter into simple sugars and then building fatty acids, a multistep process that might be better suited to a team of microbes that each metabolize different compounds, rather than just one all-purpose organism. Segrè is the principal investigator on the project. He shares the grant with researchers at the University of Idaho and Lawrence Berkeley National Laboratory.

Another major focus of Segrè’s research has to do with the trillions of microbes that live in and on the human body. Collectively, these ecosystems are known as the human microbiome.

Every one of us contains about ten microbial cells for every one human cell, and Segrè, like a growing number of researchers around the world, suspects that these microbes play a crucial role in our health. When these communities get out of whack due to poor nutrition, species imbalances, or pathogenic invaders, for example, they could make us sick. Problems with the microbial communities in our guts, for example, might contribute to the onset of intestinal diseases, and problems with our skin microbiomes might lead to acne. Now, with advances in genomics technology, scientists can use DNA sequencing to determine the compositions of these communities and begin studying such connections.

“Now everybody’s talking about the human microbiome,” says Segrè, who is also an associate professor of biology at BU’s College of Arts & Sciences and holds a joint appointment in biomedical engineering in the College of Engineering. “It’s very exciting. People are just starting to figure out what’s happening, how that interacts with our body and how that affects our health, and so on.”

But even with complete genetic information that reveals, for example, which nutrients these microbes feed on and which ones they excrete, it can be difficult to understand how these communities behave as ecosystems. After all, one swab of a Q-tip could contain ten or even hundreds of species that all rely on one another in different ways to survive.

That’s where Segrè’s computer simulations might come in handy.

“You can use these models and start asking, ‘What if organism A secretes something that organism B can use and vice versa? What happens? And can you understand these interdependencies in nature?’” Segrè says.

Together with his research team, Segrè has already begun to answer these questions. They’re especially interested in the oral microbiome and how individual microbes in that ecosystem contribute to the onset of periodontal disease. Many of the 700 microbes that live in our mouths are unculturable, meaning they won’t grow in a petri dish. Segrè suspects that some of these microbes are unculturable because they rely heavily on interactions with other species. In that case, a microbe might only grow if, for example, it gets a chemical nutrient produced nearby by another kind of microbe. With computer models, Segrè and his team can test these dependencies and perhaps help laboratory researchers figure out what molecules to put in a microbe’s environment to make it grow in isolation.

In a partnership with the Forsyth Institute, a research center in Cambridge, Mass., Segrè and his colleagues are trying to learn the roles that these individual microbes play in the larger microbiome, and in the onset of oral diseases. The work, which builds on other research Segrè has done on the oral microbiome, is part of a $7.3 million National Institutes of Health grant awarded in 2014 to BU, the Forsyth Institute, Massachusetts General Hospital, and the Massachusetts Institute of Technology. Segrè is a co-principal investigator on the project.

This and other microbiome research is still in the very early stages, Segrè says, so there are plenty of opportunities to use these computer simulations to demystify microbial communities, whether in our mouths or elsewhere.

Originally from Italy, Segrè earned his master’s degree in theoretical particle physics from the University of Trieste. It was only after a dinner conversation with a visiting professor from the Weizmann Institute of Science in Israel named Doron Lancet, who was studying the origins of life, that Segrè became fascinated with the idea of mathematically explaining the origins of life the way a physicist might mathematically explain the fundamental particles and forces in the universe.

After graduating from Trieste, Segrè joined Lancet’s research group at the Weizmann Institute and earned a PhD in life sciences there. He went on to do a postdoctoral fellowship at Harvard Medical School, where he studied the chemical reactions that make life possible. That’s where he began working on microbial metabolism. Segrè is now in his tenth year at Boston University and is focused on modeling microbes with the open source simulation software that was developed in his lab—COMETS (Computation of Microbial Ecosystems in Time and Space).

With COMETS, a user “uploads” organisms by feeding their genetic information into the software and then placing those organisms at particular points in the grid-like virtual world. After specifying what virtual nutrients are available to the microbes, they can sit back and watch how the community behaves over the course of a few hours or an entire day, depending on the simulation.

It’s kind of like playing with LEGO, Segrè says. But instead of building castles and battleships, he and his colleagues are building synthetic ecosystems. Segrè and his team published a paper on COMETS earlier this year in the journal Cell Reports. Researchers who are interested in experimenting with COMETS can download it for free from the Segrè lab website.

So far, the group has tested the software on simulations of only two and three species of microbes—Escherichia coli, Salmonella enterica, and Methylobacterium extorquens. In collaboration, researchers at other universities have experimented with living microbes to verify that, at least for simple communities with only a few species, the simulations correctly predict what happens in the real world. Scaling up to accommodate the hundreds of species in a complex ecosystem like the oral microbiome is years off, Segrè says, but there’s plenty to learn from these early, small-scale simulations.

Take, for example, what Segrè calls “shadowing,” or the eclipse effect: If colony A and colony B are alone in the virtual world, and the microbes in A excrete a molecule that the microbes in B feed on and vice versa, then the two colonies will coexist in a happy partnership. But suppose another B colony pops up between them. Segrè and his collaborators hypothesized that the microbes in the new B colony would eat up all the molecules coming from A and consequently eclipse or shadow the old B. But to their surprise, the original B thrived in the new arrangement because A was being fed so well that it produced enough food for both B colonies.

“In nature, there are a lot of structured communities with these relative positions that could affect how species interact,” Segrè says. “We’re barely scratching the surface in terms of understanding all of this, but I find it extremely exciting.”

It’s been about 20 years since Segrè left physics, but he says he doesn’t miss it.

“I don’t see them as two separate things,” he says. “I think one of the interesting aspects (of biology) is to understand living systems as a physical and chemical system, and I think that’s one of the biggest open questions in science.”