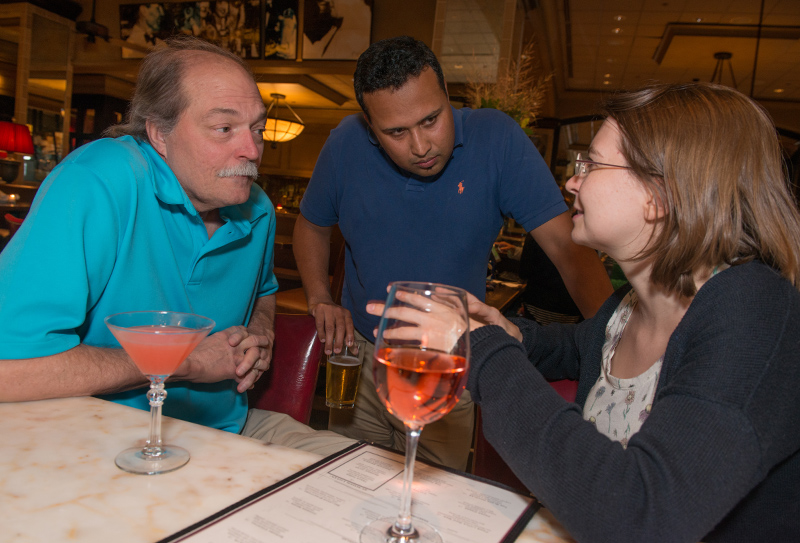 Gerald Kidd (from left), Jayaganesh Swaminathan, and Elin Roverud study the cocktail party problem: why it’s so hard to distinguish one voice in a crowd. Can musical training help? (Other members of the research team, not pictured here, are Christine Mason, Timothy Streeter GRS’04, ’04, and Virginia Best.) Photo by Melissa Ostrow

Alan Wong (COM’02) first noticed the problem a few years ago. In a crowded bar or restaurant, he could barely understand his companion’s conversation. Wong, 35, blames the problem on a well-spent youth: “I went to a lot of loud concerts in my 20s, and now my hearing sucks,” says Wong, executive producer at Boston University Productions. “It’s a bummer,” he adds, “especially when I have a hard time hearing the lady friends.”

Scientists call it the “cocktail party problem,” and it’s familiar to many people, even those who pass standard hearing tests with flying colors: they can easily hear one-on-one conversation in a quiet room, but a crowded restaurant becomes an overwhelming auditory jungle. For people with even slight hearing problems, the situation can be stressful and frustrating. For those with significant hearing loss, hearing aids, or cochlear implants, cocktail parties become an unnavigable sea of babble.

“It can really affect communication,” says Gerald Kidd, a BU professor of speech, language & hearing sciences. “It causes people to avoid those kinds of places, either because they don’t want to work that hard or it’s just unpleasant to be in a situation where they’re not following things. So it’s a big problem.”

Kidd and his colleague Jayaganesh Swaminathan, a BU research assistant professor of speech, language & hearing sciences, study the cocktail party problem, trying to understand exactly why this particular situation is difficult for so many people. Their research, funded by the National Institutes of Health (NIH) and the Air Force Office of Scientific Research (AFOSR), and published in Scientific Reports in June 2015, asked an intriguing question: can musicians—trained to listen selectively to instruments in an ensemble and shift their attention from one instrument to another—better understand speech in a crowded social setting?

“Music places huge demands on certain mechanisms in the brain, and at some levels, these overlap with language mechanisms” says Aniruddh Patel, a professor of psychology at Tufts University and co-author on the paper, who studies the cognitive neuroscience of music and language. “The question is: would a high level of musical training advance speech and language as well?” In other words, can musical training help fix the cocktail party problem?

At first, the answer seems obvious: of course musicians, either through training or talent, would be more skilled at focusing on one specific human voice amid competing voices. How could they not be? But it’s a difficult skill to test. A 2009 Northwestern University study found that trained musicians were slightly better at identifying speech amid “masker” signals such as white noise. But the results had limitations. After all, white noise is just loud and boring; but competing voices may sound similar to your companion, and may even be saying something more interesting.

“Everybody realizes that the coffee grinder in a coffee shop creates all this noise and racket that you want to avoid,” says Kidd. But the cocktail party problem is more subtle and complicated, he explains: “When you communicate in a room full of people, the noise is not just loud, it’s also interesting, and competes with the information that you’re trying to process.”

The scientists hypothesized that a musician, trained to listen selectively to one particular source, in competition with other interesting and informative sources, ought to be able to translate that training into a multiple-talker cocktail-party situation. Swaminathan designed an experiment to test it.

He found 12 musicians (the criteria: at least ten years of musical training, and actively practicing three to five times a week) and 12 non-musicians. Each subject sat in front of a computer wearing headphones, listened to multiple masking voices coming from different directions, and had to pick out the “target voice” coming from straight ahead. “It was like walking into a crowded room, with people all around you,” says Swaminathan. As expected, the musicians performed better than non-musicians, able to pick out the target voice from the maskers even when the target signal was five to six decibels softer.

But then Swaminathan tried something different: playing the masking voices backward so they were unintelligible. “It sounded like a foreign language,” he says. “A rough analog I use is an American walking into an American bar, versus a bar in Germany.” In this case, musicians and non-musicians performed about the same. “It was a really beautiful manipulation,” says Patel. To the scientists, this finding was key, indicating that the musicians’ enhanced ability lay not in the signal their ears picked up, but rather in how their brains process that signal. It isn’t that musicians have better hearing, says Patel, “but they have the ability to laser-beam focus on one stream of sound among others.”

The scientists don’t know if musicians are born with this enhanced ability or gain it through training. “That’s the million-dollar question,” says Kidd. “The whole issue of causality and correlation—is it innate or is it learned?—is an open question.” There’s also the question of whether the cognitive gains musicians experience may be outweighed by the hearing loss many of them suffer. All these bear further research, say the scientists, because what we learn from musicians may benefit society as a whole.

“What is the particular mix of cognitive and sensory abilities that make musicians so much better at this?” asks Patel. “Hopefully, understanding this will help us design training or devices than can directly help people with hearing loss.”

There are 3 comments on The Cocktail Party Problem