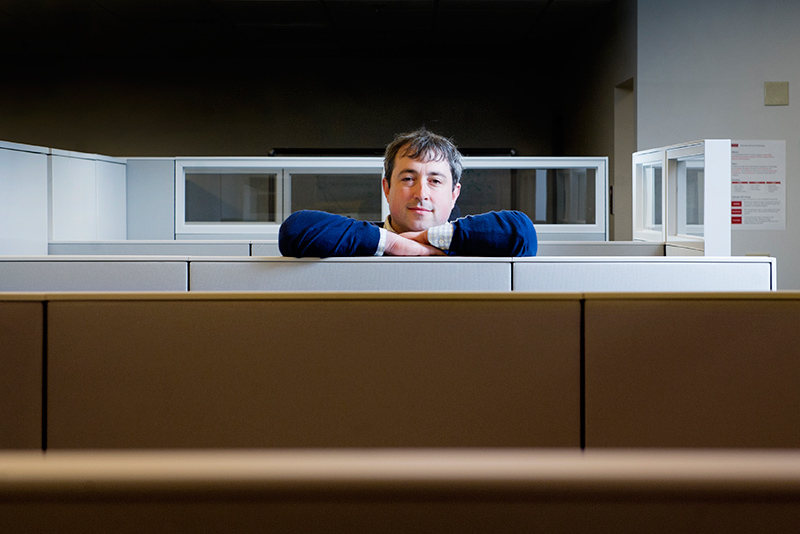 Jesse Shore found that a high degree of collaboration helps in the information-gathering part of problem solving, but that it hinders the ability of the group to come up with diverse solutions. Photo by Jackie Ricciardi

Cubicles and closed doors are out. With collaboration the organizational mantra of our time, managers have transformed the modern office into a sea of open space, where groups of people solve problems together. Online, it’s all about maximizing connectivity and sharing within the social network. “Team communication for the 21st century—everyone has a transparent view of what’s going on,” promises Slack, one of an array of popular software programs designed to boost collaboration among groups in the workplace.

It turns out, though, that for creative problem solving, it still pays off to have some people in an organization who don’t directly work together. That is what Jesse Shore, an assistant professor of information systems at Boston University’s Questrom School of Business and an expert on communications, information, and connectivity, found in an October 2015 study. But don’t get Shore wrong. He isn’t suggesting that collaboration is a bad thing. His study, in fact, also demonstrates the benefits of collaboration and a high degree of connectedness among a group of people—or, to use the social science research term, clustering. It all depends on which part of the problem-solving process people are engaged in—the search for information or using the information to come up with solutions.

Shore and his co-authors, Ethan Bernstein, an assistant professor of leadership and organizational behavior at Harvard Business School, and David Lazer, a professor of political science and computer and information science at Northeastern University, write in their study that “clustering promotes exploration through information space but inhibits exploration through solution space.”

For their experiment, the researchers adapted a US Department of Defense (DOD) tool for conducting experiments on collaboration and information gathering and customized a 25-minute whodunit game: figuring out the who, what, when, and where of a pending terrorist attack. Some 400 undergraduate participants were divided into 16-person groups. Each group was organized into one of four networks, which ranged from highly clustered to minimally clustered. Those in the highly clustered communications networks were five percent more efficient in searching for unique facts or clues. But those who were not densely clustered came up with 17.5 percent more unique theories or solutions. The study, “Facts and Figuring: An Experimental Investigation of Network Structure and Performance in Information and Solution Spaces,” was funded by the DOD and the US Army Research Laboratory and published in Organization Science in September 2015.

“The research was just one experiment in a lab,” Steve Lohr wrote in a 2014 article about the study in the New York Times, “but it does point to the larger subject of striking a balance between connectedness and isolation in the digital age.”

BU Research sat down with Shore to talk about his study and about patterns of collaboration, clustering, network structures, and problem solving—and what he’s looking at next.

BU Research: What was the goal of your study?

Shore: We were testing the effects of communications patterns on the success of organizations in solving problems. We were looking at whether they could both find diverse information and generate diverse interpretations of that information.

Why were the clustered networks better at searching for information or clues?

The clustered network was more coordinated at the group level in finding unique information. There is something sort of natural to that. If you can observe what everyone in the team is doing, you’re not going to reproduce their work. You’ll say ‘I should work on something different, we’ll cover more territory.’

What about the second phase of problem solving that you tested—the search for solutions?

When it comes to interpreting that information to come up with conclusions, coordinating might not necessarily be the best thing. If I see you’ve adopted a solution, I might simply copy yours.

Is that human nature?

When more than one of your neighbors has adopted a solution, you see what’s known as social proof: ‘Everyone thinks this, so it must be true.’ In terms of thinking independently, it’s not the number of collaborators or the amount of communication that matters. It’s the pattern of communication ties that make up the network structure of the whole organization.

What was new about this study in terms of research on networks?

We separated the part of problem solving that is about coming up with solutions from the part about the information gathering that are the building blocks for those solutions. Prior researchers hadn’t thought to do that when studying the effects of network structure on problem solving.

Where do you hope people will go from here?

We want this information to be built on. Outside of the lab, it’s hard to disentangle the effect of network structures from a whole bunch of other things, such as the attributes of the individuals in the network or any number of important contextual variables that could have shaped the network in the first place. We wouldn’t say this gives you the complete solution for all real-world applications, but it gives you an insight—that the structure that helps one part of the problem-solving process might not be the structure to use for the other part of the problem-solving process. Where coordinated search for information is the goal, you might want to favor a clustered network structure. It will naturally be more efficient and coordinated. But a clustered pattern of ties can lead to homogeneity of interpretation and it’s not necessarily so good for the part where you want to generate diverse solutions.

What can you tell us about how to navigate all this “high communications connectivity,” as you describe it?

So what can we do to avoid homogeneous thinking in the networked world?

You can design your communications technologies to avoid that. That would definitely be a frontier for future work.

I would love to work on that.

You’re working on two new studies, one using a network model to examine the international music trade, which is forthcoming in the journal Network Science, the other on Twitter and diversity of opinion. Can you tell us a little about what you’ve learned?

As for the Twitter paper, it’s currently under review, but we’re looking at whether social media really does support the polarization and echo chambers we hear about so much in the news. Our data allows us to get a broader look at those questions than previous studies have taken.