From Patrons to Chefs, a History of Women in Restaurants 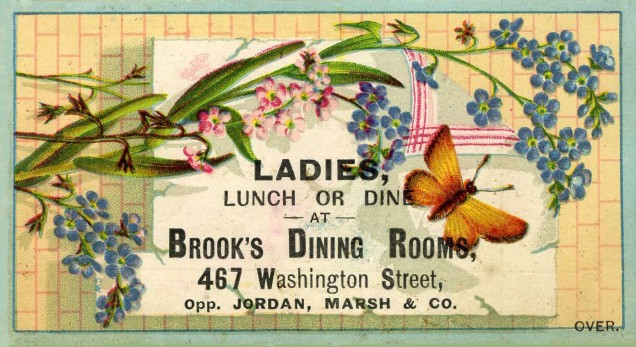 American women have long been involved in public eating places. In Early America a common pattern was set as wives partnered with husbands in operating dining rooms in taverns and inns – and then carried on alone. Elizabeth Fraunces, wife of Samuel Fraunces whose career is commemorated in New York City’s historic Fraunces Tavern, took over the tavern when her husband was named George Washington’s household steward. When Samuel died she continued in the business.

Somewhat surprisingly, in light of prudish restrictions placed on women later in the 19th century, women of the early 1800s ran establishments serving men almost exclusively. They supervised male waiters and provided steak and oysters accompanied by a full range of drinks from the bar. Running an eating place with a bar would be considered disreputable and unladylike as the century wore on.

Men far surpassed the number of women eating away from home through most of the 19th century. But as early as the 1830s women visiting town for shopping or religious gatherings came into the market for respectable places to eat. In response the proprietors of the Clinton Lunch in New York City opened a Ladies’ Ordinary in 1833 under the direction of the owner’s wife.

Slowly more dining rooms reserved for women appeared, becoming the standard for accommodating this segment of the dining-out public. Usually on the second floor and often entered through a separate door, women’s dining rooms explicitly promised that patrons would not be subject to rude looks or vulgar language. Also important, gender segregation via a separate dining room guaranteed that women’s reputations would remain intact. The Stranger’s Guide to the City of Boston said of Campbell’s Temperance Eating House, “Ladies can visit this place with perfect propriety.”

The Temperance Movement encouraged moderation or total abstinence of intoxicating liquor. By 1833, there were 6,000 Temperance societies in  the United States. (Brittanica)

Encouraged by the temperance movement which began in the 1830s, and even more so by national Prohibition of the 1920s and early 1930s, the female dining public grew steadily. Its growth rivaled in significance the rise of women restaurant workers and proprietors in terms of the future development of the modern restaurant industry.

Confectionery restaurants specializing in the odd-sounding combination of oysters and ice cream became closely associated with women patrons in the 19th century. In San Francisco, a temperance restaurant of the 1850s opened a branch for women known as Winn’s Confectionery, Ice Cream, and Ladies’ Refreshment Saloon. Along with oysters and ice cream, Winn’s supplied wedding cakes. 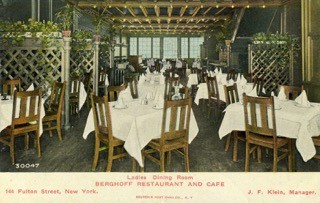 Far from applauding the accommodation of women in public eateries, censorious 19th-century commentators saw the trend as a sign of indecency. The Baltimore Sun ran an article that asserted “The New York custom, borrowed from France, of ladies dining at restaurants instead of at home, seems to be making sad inroads upon all propriety.” Nonetheless, after the Civil War there was a dawning realization that the increasing number of single working women in cities necessitated places for them to eat. Women traveling alone also needed accommodations. Appleton’s Handbook in 1873 helpfully provided a list of leading restaurants where women could dine “with propriety.”

Throughout the 19th century women of all races and ethnicities were employed out of sight in kitchens, while men dominated management and the front of the house. Hotel dining rooms were typically staffed by Afro-American men, while rough and tumble white men staffed cheap dining halls, shouting orders to the kitchen and slinging plates down long tables. The announcement that “lady attendants” would be on hand at Wilson’s Ladies and Gentlemen’s Confectionery, Coffee Rooms, and Ice Cream Saloon in Boston in 1851 marked a notable departure from the norm.

The number of women running restaurants of their own was also on the increase in the later 19th century. In Indianapolis Mrs. L. C. Mead ran a popular Restaurant and Oyster Bay that occupied three floors in 1883. The West, particularly, afforded greater opportunity than the East. The mining town of Tombstone, Arizona Territory, was home to several restaurants run by women, among them Mrs. M. L. Woods’ Melrose Restaurant, which an 1881 advertisement proclaimed was “The Largest and Most Elegantly Furnished Dining Hall in the City.”

In the 1870s and 1880s, feminist thinkers imagined women freed from the home kitchen and dining room. Some advocated neighborhood cooperative dining rooms, while others wanted ready-to-eat meals delivered or homelike restaurants. Compared to men, women proprietors and diners were more appreciative of the liberating aspect of restaurants. However, by the mid-20th century the idea of getting mom out of the kitchen would become prominent in restaurant advertising campaigns.

The range of restaurant roles that women played in the 19th century included not just servers – slowly increasing as women were hired to work behind lunch counters in the later century and in working women’s lunch clubs – but also dishwashers. Women dishwashers continued to be commonplace into the 20th century. A survey of restaurants in Michigan found women dishwashers outnumbering men, possibly due to World War I. The number of women servers by then had exceeded men, and women were also numerous as kitchen assistants, cashiers, and cooks.

Women restaurant managers were also on the rise. Women oversaw the first vegetarian restaurant in America (1895) and the Baltimore Dennett’s, the lunch room chain known for biblical verses on its walls. Women also ran food services in major department stores, including bakeries, candy kitchens, and restaurants.

The home economics movement of the early 20th century produced women trained in food management, cooking, and nutrition. In addition to running food operations in factories and institutions, many gravitated toward the commercial restaurant field where they emphasized cleanliness and nutrition. Some were hired by restaurants, such as Boos Brothers; in 1913 this early Los Angeles cafeteria chain hired a former assistant tea room manager at Marshall Field to develop and test new vegetable and salad dishes.

Women trained in home economics were almost always white. However, Afro-American women were plentiful in restaurants, whether catering in their communities or working in the kitchens of white owners. Only rarely were they hired as servers in white restaurants.

Occupational statistics from the 1910 federal census show that there was one female “restaurant keeper” for every five males. Afro-American restaurant keepers represented about a fourth of women in the business. Among servers the ratio of women was increasing, with 102,495 males and 85,798 females nationwide.

Two types of restaurant were dominated by women in the early 20th century: cafeterias and tea rooms. Women owned, managed, and entirely staffed many of the first cafeterias, some of which developed out of women’s semi-philanthropic lunch clubs. For these reasons cafeterias were initially regarded as women’s eating places and were shunned by men, who supposedly disliked serving themselves and carrying trays. Many women who ran cafeterias, such as Nola Treat and Lenore Richards of the Richards-Treat cafeteria in Minneapolis, came out of home economics careers as teachers or managers of school or factory cafeterias. Being college-educated and native-born, such business women stood in stark contrast to the many restaurant operators who were foreign-born and without much formal education. 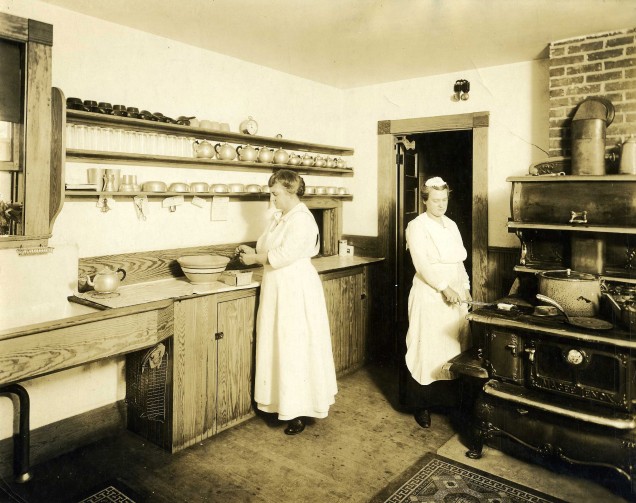 Tea rooms were also very much the work of native-born American women from the middle class, mostly white but with a number of Afro-American operators also. Tea rooms continued the sex-segregated tradition of American eating places, not because they refused to serve men but because most men found them too feminine. These small, dainty eating places reached a peak of popularity during Prohibition in the 1920s and early 1930s, barely surviving after World War II. With all-female staffs, they introduced a new role for women that of hostess, often employing a society woman whose role was to attract others of her circle. 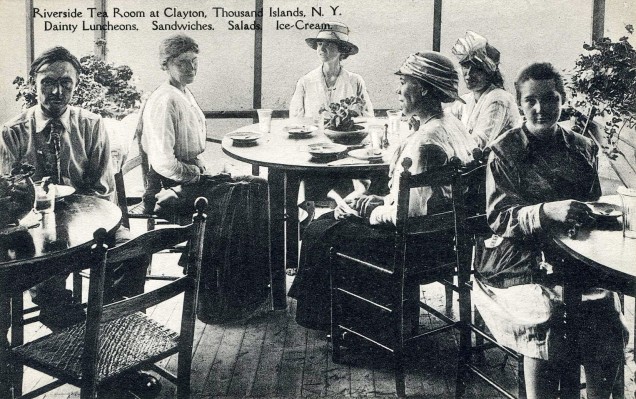 Despite tea rooms, sex-segregated dining declined in the 1920s as unescorted women began patronizing all sorts of restaurants. Clearly women were rapidly becoming a market to be reckoned with, increasing from 20% to nearly 60% of the dining public between World War I and 1927. Suddenly male restaurateurs scrambled to figure out how to please them. Cleanliness was at the top of women’s list, putting diners and hamburger chains on the outs with them for some time.

Beginning in the 1920s women became visible, even prominent, in the growing restaurant industry. In a newspaper advertisement for the 1923 convention of the National Restaurant Association (NRA) in Chicago, women’s membership was striking, represented by the Skoogland Cafeteria, the Petit Gourmet, Miss Hasting’s Tea Room, and the King’s restaurants. Women operators joined trade journals’ editorial boards and authored articles. Restaurant Management magazine added a column called The Woman Executive in the 1930s.

Increasingly women were featured convention speakers as well as officers of the National Restaurant Association (NRA). In 1926 Katherine Talbot, owner of Dayton’s Grey Manor Tea Room, addressed the annual meeting on “Atmosphere and Refinement in Restaurant Operation.” After serving as a director, Grace E. Smith was named NRA president in 1940. Although her family was embarrassed that she had pursued a career in the low-status restaurant business despite her college degree, she had won success managing a Toledo, Ohio, YWCA lunch room in 1908, and went from there to open a prosperous cafeteria and a suburban tea room. 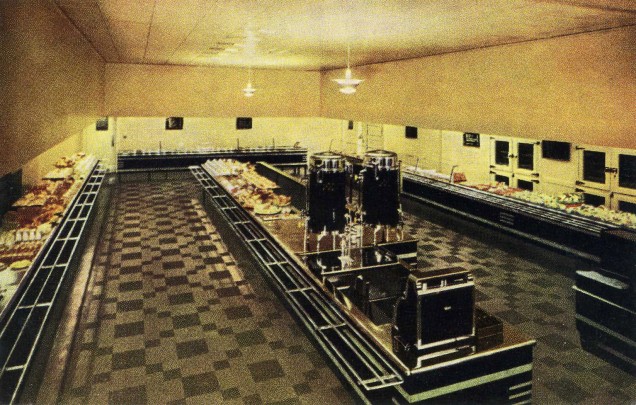 Wartime again expanded opportunities in the 1940s as it had in the teens. Prominent women in the trade then included not only Grace E. Smith and Richards and Treat, but Mary Love McGuckin of the Maramor in Columbus, Ohio, Agnes Gleason of the Parkway Tea Room in Chicago, Anna Maude Smith of The Anna Maude Cafeteria in Oklahoma City, and numerous others. Few knew that the president of Don the Beachcomber was a woman, as Cora Irene Sund assumed the position in 1933, bucking the rule that most restaurant chain executives were men.

Obtaining capital for a restaurant, however, was an obstacle for most women who were often overcharged for supplies, refused credit, charged high deposits, cheated by banks, and rudely treated generally. Restaurant Management addressed the issue in a 1930 article titled “Why Don’t They Give Women Restaurant Operators a Square Deal?” Lack of access to capital would dog women into the 1970s and beyond, resulting, for instance, in their underrepresentation in fast food franchising. In 1971 only 6.3% of franchises were held by women. Early franchises were often overtly pitched to men. A Taco Bell advertisement of 1969 was typical with its boldface headline reading, “To a man who can’t live on just an average income – Consider a Taco Bell Franchise.”

The rise of the woman chef is relatively recent. For most of the 20th century women’s cooking resembled that done at home, but on a larger scale. Kitchens frequently looked like those in homes. Boiling, baking, pan frying, and stewing were more common than grilling. The drama of big knives and high flames was absent. A kitchen run by a woman was likely to be staffed by women also as men disliked taking orders from the opposite sex. It was considered remarkable when, during World War I, Statler’s Hotel Pennsylvania hired Anna Tackmeyer as chef. However, she was to preside only over a separate female-staffed kitchen devoted to home-style specialities like Southern fried chicken with gravy. In 1943, 330 hotels reported they had women chefs, but they were evidently banished after the war. In the late 1960s a career as an astronaut was considered more promising for a women than that of chef.

Jan Whitaker writes about restaurants, department stores, and consumer culture. She has two books on the social history of department stores and one on the history of women’s tea rooms of the early 20th century called Tea at the Blue Lantern Inn. Since 2008 she has produced the blog Restaurant-ingthroughhistory.com on American restaurants and their culture.

5 Comments on From Patrons to Chefs, a History of Women in Restaurants